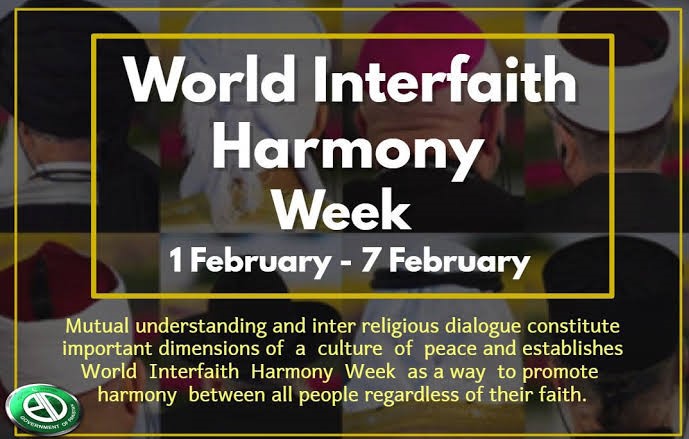 The United Nations General Assembly on 20 October 2010, by resolution A/RES/65/PV.34 designated the first week of February of every year as the World Interfaith Harmony Week between all religions, faiths and beliefs.

The General Assembly, building on its efforts for a culture of peace and non-violence,  wished to highlight the importance that mutual understanding and inter-religious dialogue can play in developing a creative culture of peace and non-violence.  The General Assembly Resolution recognized “the imperative need for dialogue among different faiths and religions in enhancing mutual understanding, harmony and cooperation among people.” The week has a potential to promote the healing of religion-based tensions in the world.

As the then Secretary General Ban Ki-moon wrote “At a time when the world is faced with many simultaneous  problems — security, environmental, humanitarian, and economic — enhanced tolerance and understanding are fundamental for a resilient and vibrant international society.  There is an imperative need, therefore, to further reaffirm and develop harmonious cooperation between the world’s different faiths and religions.”

Citizens of the World have called for a cultural renaissance based on the concept of harmony.  Rather than concentrating primarily on conflicts, struggles and suffering which is certainly necessary if we are to help resolve the many armed conflicts, World Citizens  have suggested that the focus should be on cooperation, coexistence and visions of a better future.  Harmony includes tolerance, acceptance, equality and forgiveness of past pains and conflicts.  Harmony leads to gentleness, patience, kindness and thus to inner peace and outward to relations based on respect.

Harmony is a universal common value.  In harmony we can find true belief that transcends all cultures and religions. The meaning of life is to seek harmony within our inner self. Humans are born with a spiritual soul that develops to seek self-fulfilment.  Our soul has a conscience that elevates us.  As our soul grows to maturity, we achieve our own harmony.

However, harmony is not only a personal goal of inner peace but a guideline for political, social and world affairs.  At this moment in history, our action should enhance peace, reduce conflict and activate a harmony culture.  The 21st century is the beginning of a Harmony Renaissance. Our world mission is to be ready for humanity’s next creative wave to lead us to a higher level of common accomplishment.  The World Harmony Renaissance should bring the whole world into action for this new millennium of peace and prosperity with unfettered collective energy.

Chinese culture can play an important role in the creation of this harmonious culture.  In an earlier period in Chinese thought there was an important conscious effort to create a Harmony Renaissance.  This was during the Sung dynasty (960-1279) which reunited China after a period of division and confusion.  This was a period of interest in science — “the extension of knowledge through the investigation of things”.  It was a period when there was a conscious effort to bring together into a harmonious framework currents of thought that existed in China but often as separate and sometimes hostile schools of thought: Confucianism, Buddhism, philosophical Taoism and religious Taoism.  These efforts were called Tao hsuch — the Study of the Tao — an effort later called by Western scholars as “Neo-Confucianism”.

Chou Tun-yi (1017-1073), often better known as the Master of Lien-his, was a leading figure in this effort.  He developed a philosophy based on the alternation of the Yin and Yang, each becoming the source of the other.

Thus today, after decades of conflict when the emphasis of the countries of the world both in policy and practice was upon competition, conflict and individual enrichment, there is a need for an emphasis on harmony, cooperation, mutual respect, and working for the welfare of the community with a respect for Nature.  When one aspect, either Yin or Yang, becomes too dominant, then there needs to be a re-equilibrium.

Obviously, it takes time for a harmonious society at home and a harmonious world abroad to be put into place.  The re-equilibrium of the energies of Yin and Yang do not take place overnight. Nor is this re-equilibrium only the task of the Chinese.  The cultivation of harmony must become the operational goal for many.  As Mencius (372-289 BCE) a follower of Confucius said “A trail through the mountains, if used, becomes a path in a short time, but, if unused, becomes blocked by grass in an equally short time.”

The World Interfaith Harmony Week is an opportunity to open new paths.  As world citizens we must find a new guiding image for our culture, one that unifies the aspirations of humanity with the needs of the planet and the individual.  We hold that peace can be achieved through opening our hearts and minds to a broader perspective.  We are one human race, and we inhabit one world.  Therefore we must see the world with global eyes, understand the world with a global mind and love the world with a global heart.

Kimpavitapress - February 5, 2021 0
A new wave of protests began in Haiti on January 10 against US backed president Jovenel Moïse and his attempt to extend his term...

The NGO-ization of resistance By By Arundhati Roy