Judge Timothy Walmsley delivered sentences to the convicted murderers of Ahmaud Arbery on Jan. 7. The 25-year-old Black man was chased and trapped by the pickup truck-driving, shotgun-wielding father and son team of Gregory and Travis McMichael and their neighbor, William “Roddie” Bryan, on Feb. 23, 2020, in Satilla Shores, adjacent to Brunswick, Georgia.A jury of Glynn County residents found the trio of racist vigilantes guilty of multiple felonies on Nov. 24, following a trial watched by millions on television. The jury — 11 white members and one Black man — were unanimous in their verdict that Arbery was an innocent victim of a heinous crime that merited the most severe punishment. 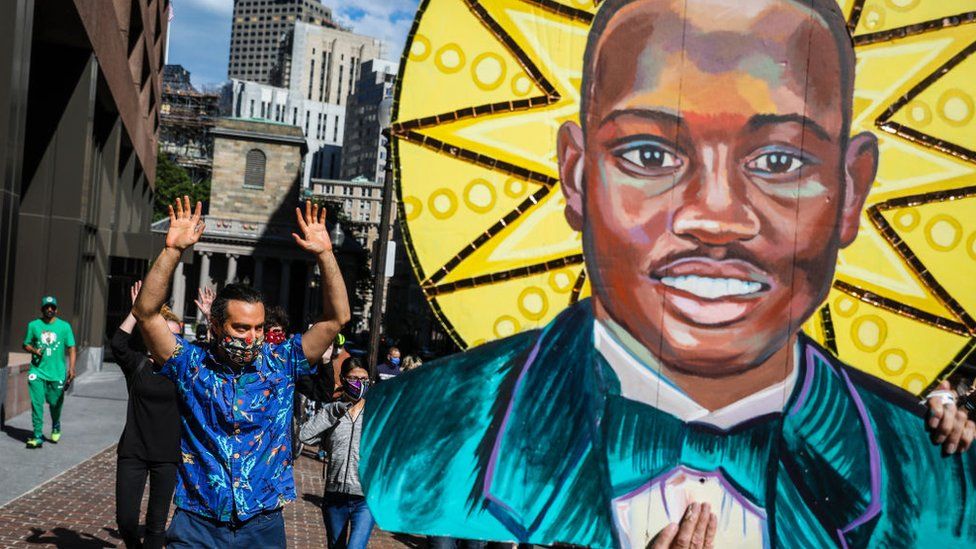 Georgia law mandates that a felony murder conviction receive a life sentence; and that after serving 30 years, there may or may not be the possibility of parole.

Before announcing his decision, Judge Walmsley spoke at some length on the terror Abery must have felt as he tried to outrun and evade his armed pursuers.

At one point the judge underscored this by remaining silent for 60 seconds, then saying that was just one-fifth of the time Ahmaud was running to save his life. He said he saw no evidence of remorse from the McMichaels, who are seen on the infamous tape turning their backs and walking away from the dying, bleeding Arbery.

After finishing his opening remarks, Walmsley pronounced the McMichaels would be sentenced to life without opportunity for parole after 30 years, but that William “Roddie” Byran would have that possibility. Bryan joined the chase and made the video. Although he was unarmed, he used his truck five times to block Ahmaud’s escape.

Travis McMichael is 35; his father Gregory is 66, and Bryan is 52. All three men are scheduled to be tried on federal hate crimes Feb. 7; and if convicted, they could face additional life terms in prison.

Another public figure, Jackie Johnson, former Glynn County District Attorney, is facing trial this spring. Gregory McMichael, a past county police officer and a recently retired investigator in Johnson’s office, admitted calling Johnson for “advice” after killing Arbery. She is alleged to have then told the Glynn County police not to arrest the three men. Johnson has been charged with “obstructing justice” and “showing favor” to her former employee.

Civil litigation is pending against the McMichaels, Bryan and various police and prosecutorial officials, brought by Abery’s mother, Wanda Cooper-Jones.

While Abery’s mother, father, family and friends expressed a sense of relief and satisfaction that his killers will suffer the consequences of their criminal act, the reality is that their son, brother, friend, neighbor will never again be with them.

Abery’s mother’s unrelenting efforts to defend her son from the spurious allegations of his killers to justify their crime is in the tradition of Mamie Till-Mobley. The mother of 14-year-old Emmett Till, who was lynched in 1955, demanded an open casket viewing of her son’s disfigured, tortured body, in order to raise mass resistance to racist violence.

The many activists across the country who marched to demand Black Lives Matter know for certain that a mass movement can make a difference in bringing about some semblance of justice for some victims — though not for all victims, known and unknown.

The people want and deserve more than a difference here and there from the constant reality of injustice, exploitation and oppression that permeates every institution, experience and moment of life in racist capitalist society. Long-term, we can’t depend on the luck of the draw. A judge and a jury like that in the Ahmaud Arbery case adhered to the evidence, but the judge and jury did not do the same in the cases of Trayvon Martin, Anthony Huber or Joseph Rosenbaum — all murdered by vigilantism.

The politicization that occurs as a mass movement rises has to be deliberately nurtured and expanded to a class consciousness that recognizes the profit system, capitalism and imperialism as the root of all societal ills.

When that consciousness is widespread and sustained, it will lay the basis for people’s justice.