The atrocity in Paris seems to trigger the word “terrorism” with a higher frEquency than ever, in the media, from the politicians. Doing so, they sign their intellectual capitulation: trust me, I am not going to try to understand anything. Watching politicians on 56 US TV channels in Georgia there was not a single word analyzing why?; like underlying conflicts and traumas. Nor conciliation and solution. Only a description of what?, the horrible violence. And what to do: more violence, war. With a question mark though: Will it work?

The whole Western world was living up to the old French saying    Cet animal est très méchant, quand on le bat, il se defend. (That animal is very vicious, when you beat it, it defends itself). Look at centuries of French/Arab-Muslim relations and find one-way beating, killing, conquest, colonialism, exploitation, France using them in wars against Turkey and against Germany promising freedom and breaking their promises, raw post-colonial colonialism, no respect for their wishes to be the masters in their own house, like now in Mali.

Using them for menial jobs in France, if they speak French. At the bottom of society, shocked when the French school system treats them equally and they climb upwards, like African-Americans when they gained access to the US school system. And eventually to US society, after a century of Jim Crow and the civil rights movement.

France is now in that phase. Do not assume that 350 million Arabs-1,650 million Muslims will take more beating hands down. Read the most belligerent of national anthems, the horrible Marseillaise, admonishing the French to hate foreign intruders “coming into our midst to cut the throats of (y)our sons and consorts–March, march, let impure blood water our furrows”. Watch the French elite of “énarques”, difficult to match in patriotic self-righteousness.

And you get a France with a president declaring war.

Treat what happened as a war and for sure you get one. With the polarization in the term “terrorism”: you are evil with a project of more evil, to talk with you is useless; crush, beat, eliminate.

And with escalation, in, and by, Paris. But watch out: there is not only destructive power, D, involved, with France having more than the other sides. There is also vulnerability, V, with France, USA etc. being many times more vulnerable. Multiply the D of one side by the V of the other sides (in plural): who is stronger? Meaning: the more destructive power one side has and the more vulnerable the other–the stronger the former.

The other side shouts “Allah is Great”, making individuals small, those they kill, and those who kill themselves with suicide vests. But so does la grande France, calling the citizens “to war, to form their battalions” against those who “would make laws in our courts”. Not so easy to find verses in the Qur’an fully matching the Marseillaise.

Any way out? On 28 October, before Paris, Tony Blair apologized for the 2003 Iraq invasion he repeatedly had said he would do again.

Why, how did it happen? Maybe his left arm was twisted by his successor as leader of the Labour Party, and his right arm by the UK prime minister, Cameron. Why? Because they feared Paris in London, and swallowed the bitter pill of apologizing for a stupid and criminal war in Iraq thousands of times more atrocious than Pari
s.

Could Hollande (be twisted to) do the same? Maybe not. But there might be a way out more palatable to French self-righteousness: an international commission acceptable to all sides to assess the relation, past, present and future–de-polarizing and de-escalating while waiting for its conclusions (which might take some time).

In law an illegal act is detached from its context, including history; in reality the context matters more and finds its willing executioners. Kill one, Belgian or not, related to ISIS or not, and the shadows of history will mobilize and hide dozens of others.

The problem is not to explain what happened, but why not earlier.

And that goes also for 9-11 in New York-Washington, for 07-07 in London, for 11M in Madrid. Millions had been victims of aggression by those present or former big powers. Why did they not “blow back” as CIA calls the “unintended consequences” of their unbelievably long list of aggressions? Could it be because they are less violent than the West, that frustration has to accumulate for a longer time and be at the level of Western state terrorism exceeding the needle-pricks of terrorism 99:1? And that the West, stupidly, assumed that their violence has had a preventive, pre-emptive, effect, that “it works”?

And then that whole badly constructed intellectual edifice collapses because non-Western victims have reached the tipping point, cannot take it any longer, and fall down on the violent side. And the West counts its victims–publishes their names and the perpetrators’ while keeping both anonymous when the West does the killing–stupidly concludes that what is needed is not less, but more violence. For individual and general prevention to work.

I have a dream. Like an American from Atlanta, Georgia, MLK Jr.

Imagine West and Islam focusing not on the worst, like Western violence for prevention and Islamic for retribution, but on the best. Like the capacity for innovation and freedom in the West, togetherness and sharing in Islam. Imagine them dialoguing publicly at a high level “how can we learn from each other”? How to get more diversity into Islam, more freedom for different interpretations? How to bring more togetherness into the West to overcome loneliness, and more sharing–of wealth, knowledge, any resource–to overcome inequality–both anomalies being rampant? How can we reconcile the Islamic utopia of a world ummah, the community of the believers, dotted with countless local authorities based on the mosque and the shariah court, with the Western utopia of a world government, dominated by the West?

Morale: start working. Do not waste time on stupid violence-war. 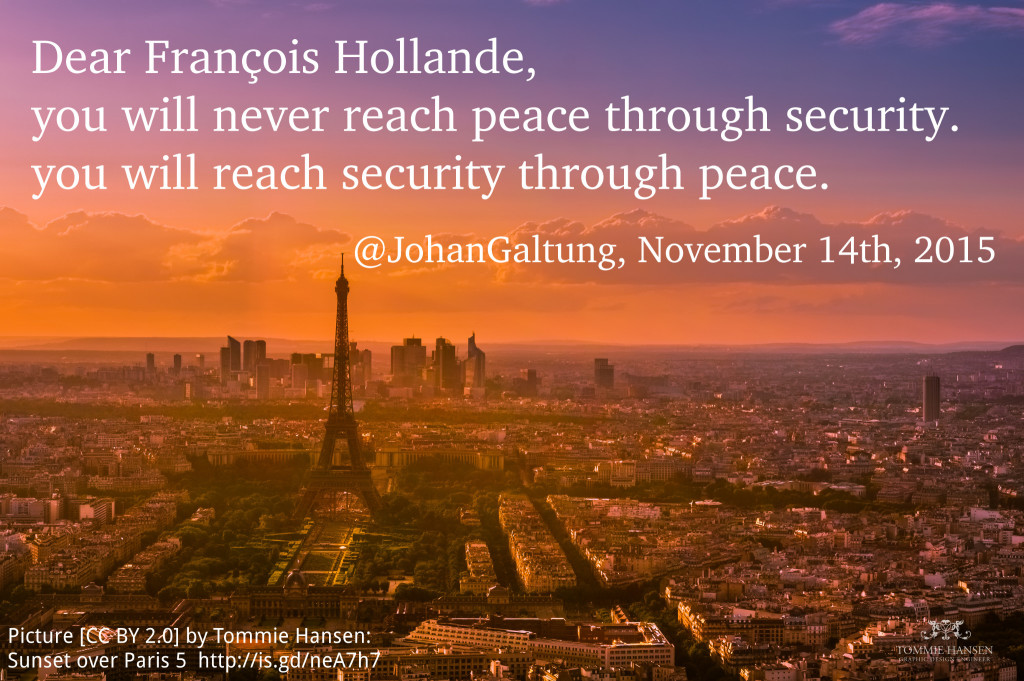 Johan Galtung, a professor of peace studies, dr hc mult, is founder of the TRANSCEND Network for Peace, Development and Environment and rector of the TRANSCEND Peace University-TPU. He has published 164 books on peace and related issues, of which 41 have been translated into 35 languages, for a total of 135 book translations, including ‘50 Years-100 Peace and Conflict Perspectives,’ published by the TRANSCEND University Press-TUP.

Kimpavitapress - September 13, 2016 0
By Franck Kuwonu Most news headlines from the Democratic Republic of the Congo (DRC) have one thing in common – their focus on conflict, particularly...

Refugees Welcome: 15 Pieces of Street Art and Graffiti from Europe...

Us: We have met the enemies and they are us