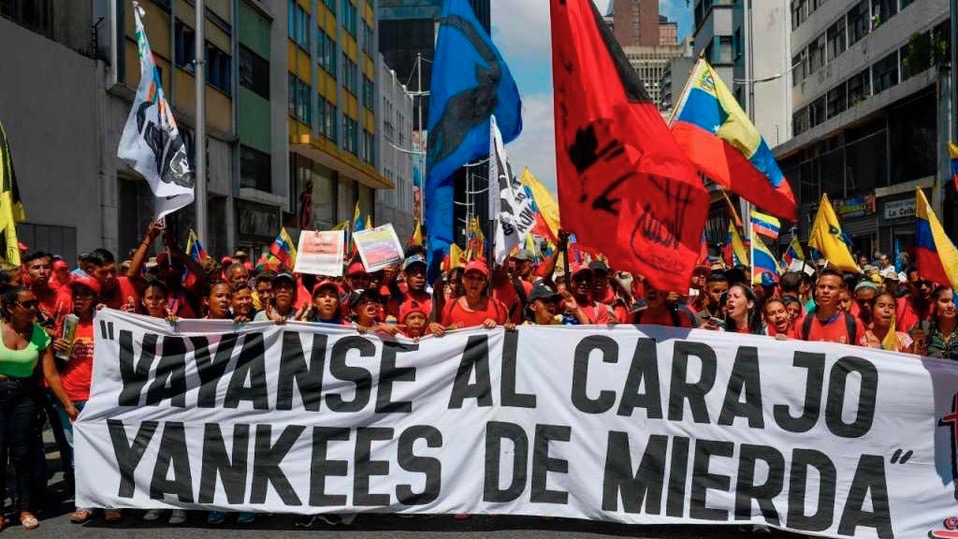 Venezuelans protest against the US-imposed blockade.

On February 20, the New York Times published an article titled “Venezuelan Women Lose Access to Contraception, and Control of Their Lives.” This article attempts to distort reality, as it completely ignores the siege and aggressions the Venezuelan people currently subjected to.

For greater context, we should note that in 2012, Venezuela granted completely free access to safe and quality contraceptives, reaching a coverage of 22.16% in the national public health system. Access was nearly universal both due to the purchasing power of Venezuelans at the time and because both private and public health networks were subsidized up to 70% by the government, with funds guaranteed by the country’s foreign income.

This reality changed abruptly in 2014 with the formal beginning of aggression that took the form of economic warfare and the application of unilateral coercive measures (UCMs) against Venezuela. One of the negative effects that occurred early on was precisely the shortage of contraceptives and their elevated prices. The result: a loss of autonomy over our sexuality, limiting the capacity for prevention and family planning. This led to increases in a variety of indicators such as teen pregnancies, sexually transmitted infections and maternal mortality, which we condemn as collateral damage of the sanctions.

The State Department always insists that the sanctions are not against the Venezuelan people, but rather they target high-level officials in the government. But the reality is that no Venezuelan is spared from being affected firsthand by this type of warfare, regardless of their social status. This is acknowledged by those that support the government as well as opposition factions. The world should know that the United States has not tried to “save democracy” in Venezuela. The predominant interest so far – and we hope this changes with the new Democratic administration – has been to appropriate the country’s resources and sources of wealth, to eliminate the collective worldview of the ideas of socialism and liberation, to eradicate chavismo and thereby strip us of our sovereignty.

The unilateral coercive measures, erroneously called “sanctions”, therefore constitute a form of warfare, a silent crime and assuredly a crime against humanity, as it is defined by the United Nations. The UCMs are designed to destroy, to cause physical as well as psychological injuries. They are applied in a discriminatory and contemptuous manner; they are aimed at changing the will of the people through a form of violence.

These attacks are constant, generalized and systematic against a civilian population, and they are the policy of a country that is superior economically and militarily. This constitutes a disproportionate attack on said population, and as such, it is a flagrant violation of human rights. Since the proliferation of the UCMs, the Venezuelan state has experienced an intentional freezing of its bank accounts throughout the world. They have blocked transactions and confiscated public goods that belong to every Venezuelan. Suppliers receive direct orders to not deal with Venezuela, and others engage in overcompliance out of fear being affected.

Venezuelan women condemn how US empire has openly been the main driver of the hybrid war against the Venezuelan people. Since 2014, the US has applied over 150 UCMs that not only affect the sexual and reproductive rights of women, they also have made it difficult, and at times impossible, to access food, medicine, medical care, clean water, hygiene, public transport, electricity, and telephone and internet services (see U.N. Special Rapporteur Alena Douhan’s report). There is no doubt that the blockade and sanctions have caused harm and suffering to the Venezuelan population, and this harm is immeasurable in the case of women and children. The sanctions and blockade have not only been maintained during the pandemic, they have expanded.

The last major popular mobilization in Venezuela was a feminist rally on March 8, 2020. Thousands of us came onto the streets to defend the rights we gained thanks to the Bolivarian Revolution and its historic leader Hugo Chávez. We took to the streets to denounce the sanctions and criminal blockade, but also to press for our feminist struggles and demands, which not only includes the legalization of abortion (which was abandoned by the opposition-controlled National Assembly of 2015-2020), but also the right to live well and not face the threat of dying in imperialist wars and invasions.

For Venezuelan women, defending the Bolivarian Revolution is a principle that cannot be relinquished, because although imperfect, it is an example of humanist politics. In Venezuela, with practically negative income, the government continues to prioritize social investment and applies measures to help the poorest face the ravages of war. It is understood that this is the only possible response to the blockade.

In the middle of a pandemic, exemplary public policies have been implemented to prevent coronavirus contagion and deaths, guaranteeing medical treatment, employment and salaries, among others. When we compare this reality with the one experienced by women in capitalist countries, there is greater awareness of the struggle being waged.

In Venezuela, popular feminism is a dynamic and demanding force. On March 4-6, we organized a national and international online gathering called Todas Venezuela (Everyone Venezuela) to debate, analyze and propose actions regarding our right to health, life, recreation, a productive economy, the right to abortion, marriage equality, feminist and anti-patriarchal spirituality, equal political participation, and how we are affected by sanctions and the blockade.

All of this is possible because we live in a country where participatory democracy is a daily exercise of consciousness and action by the vast majority. We invite Julie Turkwetiz and Isayen Herrera, authors of the aforementioned article, to meet with us, cover this activity and interview women who are on the front lines of resisting the blockade and sanctions.

Finally, we would like to invite the international community to reject the aggressions and threats against Venezuela. Expressions of solidarity and sisterhood are of vital importance. Venezuelan women are not inclined to renounce our rights, the ones we were only able to reach, sustain and deepen during the revolution.

Carmen Navas Reyes and Laura Franco work at the Simon Bolivar Institute for Peace and Solidarity Among the Peoples in Venezuela.

Desolation and despair in Libya: the murder of Salwa Bugaighis By...

Kimpavitapress - July 3, 2014 0
Looking back, it feels as if Salwa Bugaighis embodied not the hopes and aspirations of the majority of her country's people but a...

UN: Refugee Crisis Not in Europe, but in Africa, Mideast, Asia