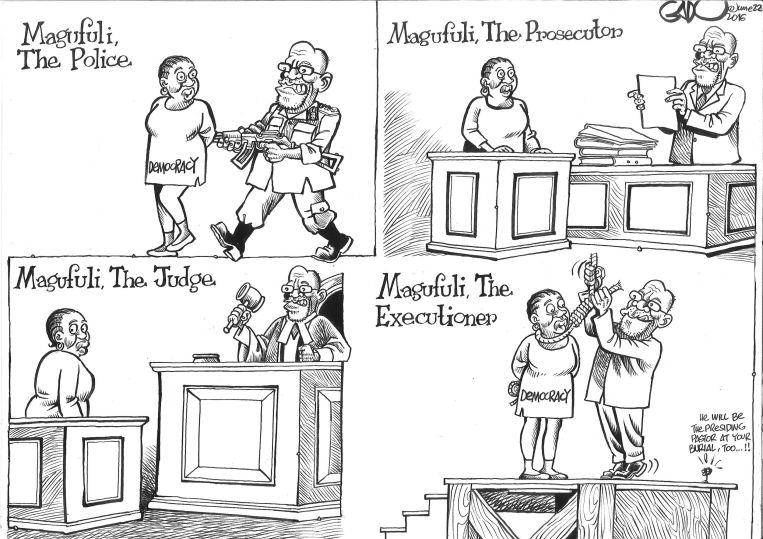 For example, the creation of the United Republic in 1964 was the outcome of a bloody revolutionin Zanzibar. And the forced resettlement of the rural population in the 1970s was often brutal. The supposedly backward south of the country was most affected by this social engineering.
Julius Nyerere, Tanzania’s first post-independence leader, might be rightly revered across Africa for the role his government played in various liberation struggles. But his domestic agenda isn’t recalled with the same fondness, especially in the south.
Multiparty democracy came to Tanzania in 1995. Yet the autocratic and paternalistic tendencies remain, as reflected in the extremely heavy-handed nature of the response to unrest in Mtwara in 2013.
This is also echoed by the actions and rhetoric of current President John “the bulldozer” Magufuli. While some celebrate his “no nonsense” attitude when it comes to tackling corruption and excessive government spending, others express major concerns over his ban on opposition political rallies until the 2020 general election. He’s also drawn ire for the failure of his government to implement court rulings on human rights.
And the country has witnessed major protests at the management of newly discovered reserves of natural gas in the south.
As a result there’s a widespread view across southern Tanzania that for half a century the central government has pursued a deliberate process of mistreatment and marginalisation.
Rural collectivisation is a significant milestone in such claims, a process that was kick-started by the Arusha Declaration. The document’s 50th anniversary is a prescient moment to reflect on its impact and the legacy of autocratic rule in Tanzania.

My fieldwork over many years in southern Tanzania has revealed widespread scepticism about the value of independence to the inhabitants. Uhuru – or independence – from Britain in 1961 is seen to be a less significant moment in the lives of many rural Tanzanians than the Arusha Declaration.
As a 90-year old farmer told me:

Tanganyika became Tanzania and our flag changed, (Queen) Elizabeth left and (President) Nyerere arrived. The leaders knew about these changes but nothing changed for me… Change came after Nyerere’s speech in Arusha, he told us about ujamaa and we were forced to move from our villages.

Many Tanzanians living in the southern parts of the country feel the same way. This isn’t surprising given that the declaration triggered rural collectivisation (villagisation) which brought about tangible changes to people’s lives. It also cemented the language of ujamaa or “African Socialism”.
Villagisation was guided by the belief that communal farming could improve agricultural productivity and guarantee long-term food security and self-sufficiency.
At the outset Nyerere declared that migration to ujamaa villages would happen voluntarily. Forcing people to move wouldn’t be countenanced by the state.
But when only 15% of the total population chose to resettle between 1969 and 1973 the governing Tanganyika Africa National Union decreed that:

to live in villages is an order.

Nyerere’s increasing sense of urgency is reflected both in his famous phrase “we must run while others walk” and in the decision to rapidly transform voluntary migration into mass resettlement. Many people that I interviewed recalled this as a brutal process.

People were moved by force, the soldiers came, they came to worry the people, and they were taken, all of their things were destroyed or put in a truck.

Not all recollections of this process were universally negative. But first hand experiences of villagisation had a profound and lasting impact on many people.
These were tumultuous times in the country, also reflected in increased authoritarianism in Tanzania from the late 1960s onward. Renowned Ugandan academic Mahmood Mamdanidescribes the events as “decentralized despotism” – a paternalistic urban elite making decisions for the “backward” rural poor. This, he argued, bore many of the hallmarks of colonial modes of rule within post colonial power structures.
There have been other critiques of the ujamaa villages project. It not only affected people on the ground but also precipitated a national food crisis.
One of my interviewees blamed Nyerere directly for

destroy[ing] our farms and houses to build something that he called the nation.

Why caution is required

Magufuli’s sky high national approval ratings show no signs of abating. This adds further fuel to the comparison that is made with Julius “father of the nation” Nyerere.
The autocratic nature of Nyerere’s rule, informed by a clear sense of paternalism towards the rural majority, mirrors the colonial model and is reflected in contemporary political leadership in Tanzania.
I believe that there’s merit in the argument that the forcible resettlement of the rural majority under Nyerere partially mirrored colonial modes of rule. The worrying thing is that further continuities are evident in the enactment of the Arusha Declaration and the authoritarianism of today.
This should be food for thought for those heaping praise on the new regime in Tanzania.
Rob Ahearne is a Senior Lecturer in International Development, University of East London

The Lessons We Haven’t Learned

Kimpavitapress - August 5, 2020 0
Seventy-five years after the U.S. atomic bombings of Japan, we remain perched on the precipice of unparalleled catastrophe. by Helen Caldicott August 3, 2020   My birthday is August...

What Africa and Europe can learn from the American elections ?

S.O.S Ethiopia: Appeal to all Ethiopian political leaders inside and outside...