[Lansana Gberie is the author of “A Dirty War in West Africa: the RUF and the Destruction of Sierra Leone.”]

The calamity that struck Sierra Leone on Aug. 14, when Sugarloaf, the conical mountain overlooking the capital, Freetown, collapsed in a mudslide that swept away buildings and killed at least 400 people, was shocking but not entirely surprisingly. It is important to be blunt: The tragedy was entirely man-made.

This is a moment for grief, sympathy and emergency assistance to a country that has barely recovered from a devastating Ebola epidemic three years ago. But this must also be the time for Sierra Leone’s government for once to take drastic measures to make sure a similar disaster does not occur, which is all but certain to happen if nothing changes.

The Freetown mudslide was caused by a more deliberate human activity than is usually associated with climate change and similar natural catastrophes. Sugarloaf, which is still covered on the top, at about 3,000 feet, by lush vegetation, is part of an allocation of supposedly protected areas officially called the Western Area Forest Reserve. The mountain range overlooks Regent, Hamilton and Leicester — villages created by the British in the early 19th century for liberated slaves, as well as the Guma and Congo dams, which supply the capital with water (though no longer adequately, as a result of the deforestation). 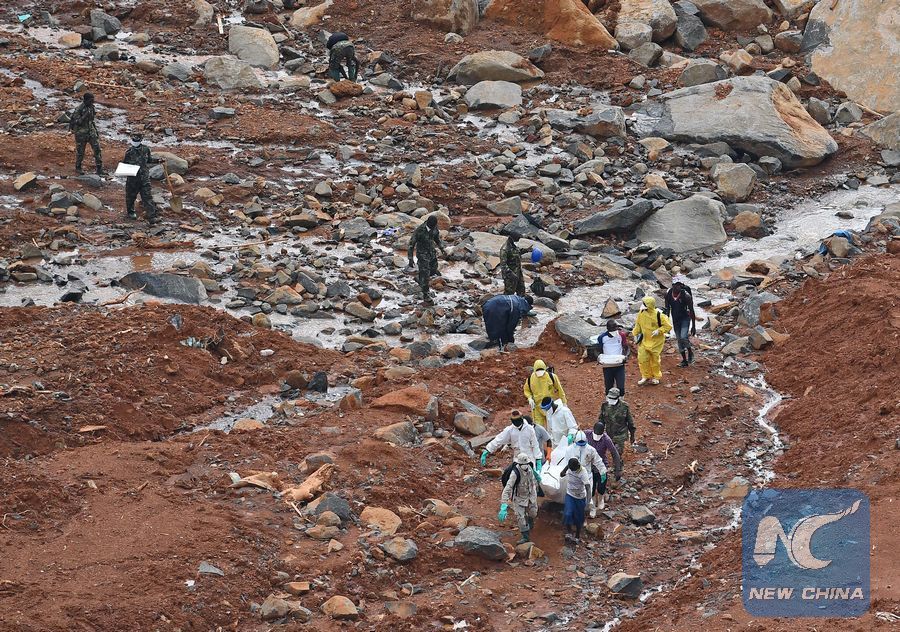 Bodies of the victims are tranferred out of the site of the mudslides
in Freetown, capital of Sierra Leone, on Aug. 18, 2017.(Xinhua/Chen Cheng)

But a fleeting post-civil war boom in the 2000s had its most lasting effect in the area in the form of frantic housing construction that has led to the degradation of the so-called protected areas, most of which have been built over. The rain forest providing protective cover for the city below has been denuded by the buildings. This destruction started at the former colonial settlement that Sugarloaf overlooks on one side, Hill Station, which once hosted many charming bungalows. Hill Station was built in 1901 as a Europeans-only residence, some 700 feet above Freetown. Malaria was the reason for this segregation. Dr. Ronald Ross, whose research in Sierra Leone led to the conquest of that deadly pathogen, had recommended that houses for Europeans “should be built on elevated sites.”

When Sierra Leone gained independence from Britain in 1961, the new postcolonial elite inherited the coveted place and reserved it for top officials. However, when civil war — a great social leveler — interrupted in the 1990s, thousands of people displaced from the countryside flocked to Freetown. It became harder to control where people built homes or lived, and harder still when the British-led International Military Training and Advisory Team Sierra Leone constructed a sprawling barracks behind what looked like a medieval rampart at Hill Station. The area instantly became the preferred home for the country’s elite, attracted by the security that the British presence supposedly guaranteed. The Americans enhanced the area’s attraction enormously in 2006 when they opened an imposing embassy close by, built at the cost of more than $40 million. Caddell, the American company that did the construction, announces on its website that the embassy “has played an important part in the healing process” of the war-torn country. So it might have.

The once-exclusive area is now home to rich and poor alike, oppressor and oppressed: a mesh of shacks, occupied by the poor and dispossessed, alongside grotesque mansions and perennially unfinished brick houses, their owners mostly politicians out of favor, their expensive follies creating an odd impression of blight or ruin. Since some of the Sierra Leone’s most powerful political figures were culpable in the degradation, the dire warnings by the country’s environmentalists were guaranteed to go unheeded by the government.

In a widely circulated article in 2014, Sama Banya, Sierra Leone’s leading conservationist, called on President Ernest Bai Koroma to enforce the National Protected Area law, which his government enacted in 2012, by demolishing buildings constructed on protected land and planting trees to replace those that had been cut down. Mr. Banya warned that unless Mr. Koroma summoned the political will to act, there would be “predictable dire consequences.”

Two years ago, flooding in Freetown killed 10 people and destroyed several homes. The misnamed Environmental Protection Agency, which is often complicit in some of the most serious disturbances to Sierra Leone’s flora and fauna, responded by setting up ridiculous flowerpots on roads in Freetown that are often used by officials. Clearly, this sort of superficiality appeals to them.

This time, however, Mr. Koroma should do something decisive to leave a legacy other than an image of a helpless leader always appealing for and receiving foreign donations amid national calamities. He must act now to prevent another deadly flooding or mudslide by enforcing the National Protected Area law, which forbids construction in protected areas like those around Sugarloaf. This demands real action, including the demolition of those buildings and the relocation of the people occupying them. If he fails, more of Sierra Leone’s people are sure to die.

Are We Building Our Own Prison Thinking We Own the Key to Our Cell?

When A Virus Hits Town, Racists Hit Back!

Kimpavitapress - March 12, 2020 0
When A Virus Hits Town, Racists Hit Back! Around the planet, from Peru to Melbourne to Paris, Asians are subjected to threats and abuse under...

SOS: Save our seas By Rene Wadlow