7 Apr 2016 – April 7th marks the passing of one of the greatest, most revered and most important figures of African and world history, Toussaint L’Ouverture one of the liberators of Haiti.

By 1801 Haiti, an island made up of half a million slaves, two-thirds of whom had been born in Africa, declared independence from European colonialists.

By April 7th 1803, Toussaint L’Ouverture died in a prison cell in the French Alps of cold and hunger, but not before his work had ensured the Haitian revolution would continue after he was gone, and that slavery would never again return to the Island.

From late 1803, after many years of fighting colonial powers the Africans in Haiti led by Jean-Jacque Dessalines freed the island from the clutches of the Europeans.

To this day, Haiti remains the only successful African revolt against slavery in the occupied European controlled colonies, and in doing so also became the first Black republic with its own constitution, adopting ideals espoused by the French revolution with a greater sincerity and vigor than even the French bourgeoisie themselves.

Today, the island remains one of the poorest countries in the world, as is the price often paid when daring to resist colonialism and occupation. Just look at Cuba today, for example.

The Haitian revolution, which is not over, represents a tradition which is both important in historical terms and also in the modern context.  The so-called free world, or the same system which was built by free labor and human capital extracted from slavery, still operates today on the same terms, exploiting countries to seize resources, ultimately to control capital.

When there is not a direct war for resources, today, more and more, we see ‘proxy wars’ played out in other people’s countries, with super powers jostling for position albeit with different agendas.

At one point in the 1790s Haiti was also a place which was being fought over by different colonial powers in the Caribbean, themselves at war with each other in Europe. A large chunk of the World’s sugar cane came from Haiti, and so even in a time of war, when hundreds of thousands of Haitians were fighting tens of thousands of European occupiers, Haiti was still among the most lucrative islands in the Caribbean to control.

And therein lies one of the keys to Toussaint’s genius; born a slave, but later able to free himself in his 40s, Toussaint was able to enjoy some of the benefits of the emerging privileged class in Haiti. Toussaint was educated, was an astute political analyst, and also a second to none military commander.  It would be fair to say, that under Toussaint’s leadership, Africans in Haiti were able to organize and keep at bay several colonial powers at once for more than a decade.  At different points Toussaint both sided with the French to fight other European powers in Haiti-and towards the end fought the French, as Napoleon attempted to force the island back into slavery following partial reforms achieved towards emancipation and freedom.

While there is a long tradition of resistance in the Caribbean of fighting colonialists tooth and nail, both from the slave ships and in the islands themselves, Haiti remains the only successful rebellion, able to rid its shores of those who had enslaved its population. The rebellion did not start in Haiti, but began the moment the first Africans were enslaved by the European merchants and capitalists in West Africa.

Toussaint and the other leading figures of African resistance in Haiti, or San Domingue as it was then known, did not spring up out of obscurity.  The conditions which produced both the necessity for revolution, and the individuals and visionaries capable of leading it, were built up over several hundreds of years.

The brutal conditions suffered by slaves, which are unimaginable, built up over time a deep resentment.  Writers like C.L.R. James, for example, describe in their works in detail, the sophisticated violence, humiliation, and dehumanization that Africans endured at the hands of Europeans in Haiti. The sick pseudo-science which dominated the day, a bit like the perverse modern form of ‘humanitarian intervention’, suggested that Africans were not human, and that therefore to control them as animals required a level of brutality which would both subdue them both physically and psychologically. 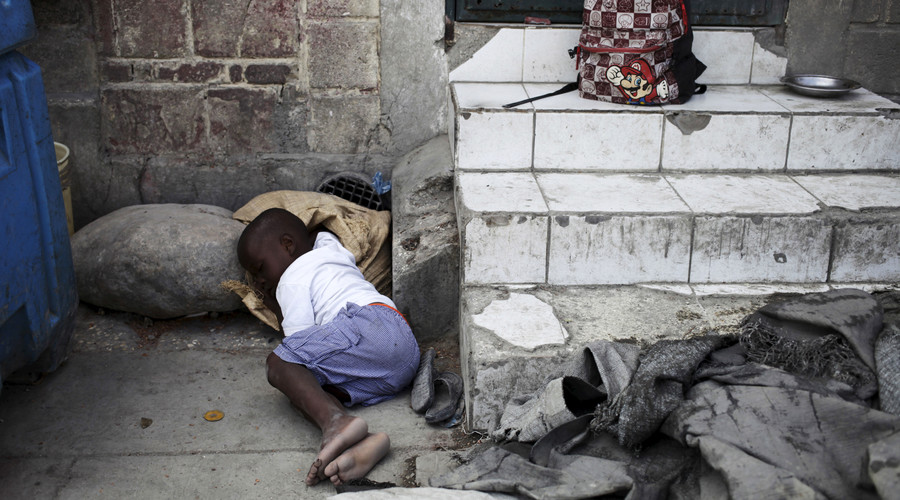 A boy sleeps on a street in Port-au-Prince, Haiti. © Andres Martinez Casares / Reuters

It stands to reason then, scientifically and rationally if nothing else, that it would ultimately take a force at least of equal measure from Africans in Haiti to free themselves from the clutches of slavery forever.  And the first stages of emancipation in Haiti were indeed bloody, with Europeans being massacred indiscriminately as payback for years of suffering.

The resistance in a sense traced its roots back to Africa, and even by around 1750, there were literally thousands of Africans who had run away from the sugar plantations and were hiding in the hills and harder to access parts of the island. The Voodoo culture, songs of freedom, and determination to once again be free, had existed among the people for as long as they had been enslaved there.

By the time the French, who controlled Haiti, were preparing to do the unimaginable and behead their own King, and indeed anyone deemed disloyal to the class revolution in France, the conditions in Haiti had reached a point whereby the masses were fully ready to grasp the ideals of liberty and equality-more so than any European who had articulated them.

The call of the masses, including the emerging mixed race population of Haiti, to be given the rights of citizenship had achieved some success.  Ironically, France caving in to some reforms, if for no other reason than to ensure Haiti did not fall into the hands of other colonial powers, meant that leading up to the complete expulsion of the remaining Europeans in 1804, Africans in Haiti had in a sense become the true French Republicans on the island fighting for France. When Napoleon set his sights on reversing this, the fear among Africans was that Haiti would revert back to slavery which became a catalyst for fighting the remaining French too.

The final defeat of the French in 1804, after Napoleon had sent thousands to reclaim the island, secured Haiti’s place in history as the first and last fully successful slave revolt.  Haiti’s constitution and independence and even leadership, like any other, were not without its problems and contradictions.

But Toussaint, and the victory for Haiti, is an example of what is possible for the human spirit to achieve even in the face of insurmountable odds.  It shows what Africans were truly capable of in the face of all of the racist pseudo-science of the day.

The revolution in Haiti has been largely ignored or forgotten by mainstream history – perhaps because as an example of resistance, it reflects what is possible in the face of the powers which rule the world today – this is dangerous for any ruling orthodoxy.  When slavery is taught in schools, Hait
i is rarely mentioned.

Neither for example is the island of St Thomas, which, according to many historians was liberated under the leadership of three women in 1793, and held for a year, before the Dutch eventually with the help of the other colonial powers restored the island to slavery.

Toussaint stands as a towering figure of resistance to this, but so too do the women and men who raised him, who taught him his history, so that, even in later life when the African uprising in Haiti began, he would not seek to protect his own privilege and status, but rather, would leave it all in a second to go and fight, lead, and ultimately die for his people.

The revolution in Haiti, stands as a beacon of human triumph but also played a huge role in the eventual abolition of slavery.  The revolution was influenced by events in Paris, but Paris and the world were also shaped by events on the tiny island.

There are countless examples of resistance to colonialism throughout the world, but today on April 7th we must remember Toussaint, and also all those who fought and died in the fight for freedom and justice.

Toussaint and the revolution emerged as the inevitable consequence of slavery and repression, but also of the unique circumstances which developed in Haiti.  Such circumstances were developed over time by Africans in Haiti, who like the oppressed people all over the world, refused to resign and give themselves up to their fate.

As the great abolitionist Frederick Douglass once noted “There is no progress without struggle” and perhaps this is true of Haiti.

Richard Sudan is a London-based writer, political activist, and performance poet. His writing has been published in many prominent publications, including The Independent, The Guardian, Huffington Post and Washington Spectator. He has been a guest speaker at events for different organizations ranging from the University of East London to the People’s Assembly covering various topics. His opinion is that the mainstream media has a duty to challenge power, rather than to serve power. Richard has taught writing poetry for performance at Brunel University.

African Liberation Day: The Pentagon and CIA continue to destabilize...

Kimpavitapress - May 24, 2016 0
Only an upsurge from the left and anti-imperialist forces can fulfill the visions of a true united Africa in line with the work of...

From a Refugee Camp to Davos: One Co-Chair's Story

'Year of return': Hundreds of African-Americans resettle in Ghana