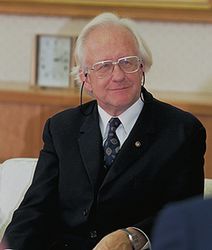 Johan Vincent Galtung, dr, dr hc mult, a professor of peace studies, was born in Oslo, Norway on the same day that the UN would come to existence 15 years later. He is a mathematician–his first Ph.D.–, sociologist, political scientist and the founder of the academic disciplines of Peace and Conflict Studies. He founded the International Peace Research Institute, Oslo (1959), the world’s first academic research center focused on peace studies, as well as the influential Journal of Peace Research (1964). He has helped found dozens of other peace centers around the world since.

He has served as a professor for peace studies at universities all over the world, including Columbia (New York), Oslo, Berlin, Belgrade, Paris, Santiago de Chile, Buenos Aires, Cairo, Sichuan, Ritsumeikan (Japan), Princeton, Hawai’i, Tromsoe, Bern, Alicante (Spain), Islamic University of Malaysia in Kuala Lumpur, and dozens of others on all continents. He has taught thousands of individuals and motivated them to dedicate their lives to the promotion of peace and the satisfaction of basic human needs.

He has mediated in over 100 conflicts between states, nations, religions, civilizations, communities, and persons since 1957. His contributions to peace theory and practice include conceptualization of peace-building, conflict mediation, reconciliation, nonviolence, theory of structural violence, theorizing about negative vs. positive peace, peace education and peace journalism. Prof. Galtung’s unique imprint on the study of conflict and peace stems from a combination of systematic scientific inquiry and a Gandhian ethics of peaceful means and harmony.

According to a recording made by Naakow Grant-Hayford [member of TRANSCEND’s Executive Committee and director of the Galtung Institut]:

This happened in spring of 2006 on a train-ride between Marburg and Frankfurt’s airport, when I was still an undergraduate in Political Science and Peace and Conflict Studies. The first question I ever asked Johan Galtung: “Do you have the feeling that your work has been in vain? With all the wars still ongoing right now all over the world, after 50 years of continuous work for peace, I can imagine that you must be very depressed.” His answer was, as always, straight to the point, incisive: 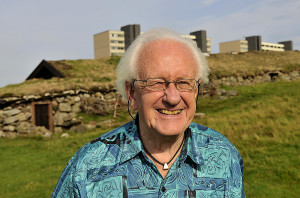 “I am not sure you have ever read any of my work when you ask this kind of question. My point is to deal with conflicts when and where you are asked to work on them. Whoever spoke of working on the whole world in one go? I have never been an advocate of world-saving narratives. The point about my work is to identify the neuralgic, specific contradiction in a specific place in space and at a specific moment in time and dissolve the contradiction with conflict transformation in order to prevent an escalation of whatever social contradiction one is dealing with into violence, whether direct or structural. To ask me whether I want to save the world is to have understood nothing about how conflict transformation works in practice. It’s like suggesting that a brain surgeon would want to extract a patient’s entire brain instead of working on the specific complication identified and localized in a specific region of the cerebral cortex. No, that is no way to proceed. One identifies concrete underlying contradictions in the social system at hand, then one identifies the causes, its drivers, and strives to undo the harm and hurt that could result from it by
nonviolent means. I am not concerned with saving the world – I am concerned with finding solutions to specific conflicts before they become violent.”

Galtung was jailed in Norway for six months at age 24 as a Conscientious Objector to serving in the military, after having done 12 months of civilian service, the same time as those doing military service. He agreed to serve an extra 6 months if he could work for peace, but that was refused. In jail he wrote his first book, Gandhi’s Political Ethics, together with his mentor, Arne Næss. This event would trigger a world-changing lifetime work for peace: 164 books, plus.

As a recipient of over a dozen honorary doctorates and professorships and many other distinctions, including a Right Livelihood Award (also known as Alternative Nobel Peace Prize), Johan Galtung remains committed to the study and promotion of peace.

In 2008 he founded and writes a weekly editorial for the pioneeringTRANSCEND Media Service-TMS website, which features Solutions-Oriented Peace Journalism.

He is founder (in 2000) and rector of the TRANSCEND Peace University, the world’s first online Peace Studies University. He also founded in 1993, along with Prof. Dietrich Fischer,TRANSCEND International, a global nonprofit network for Peace, Development and the Environment, with over 500 members in more than 70 countries around the world. As a testimony to his legacy, peace studies are now taught and researched at universities across the globe and contribute to peacemaking efforts in conflicts around the world. In 2008, he founded the TRANSCEND University Press. 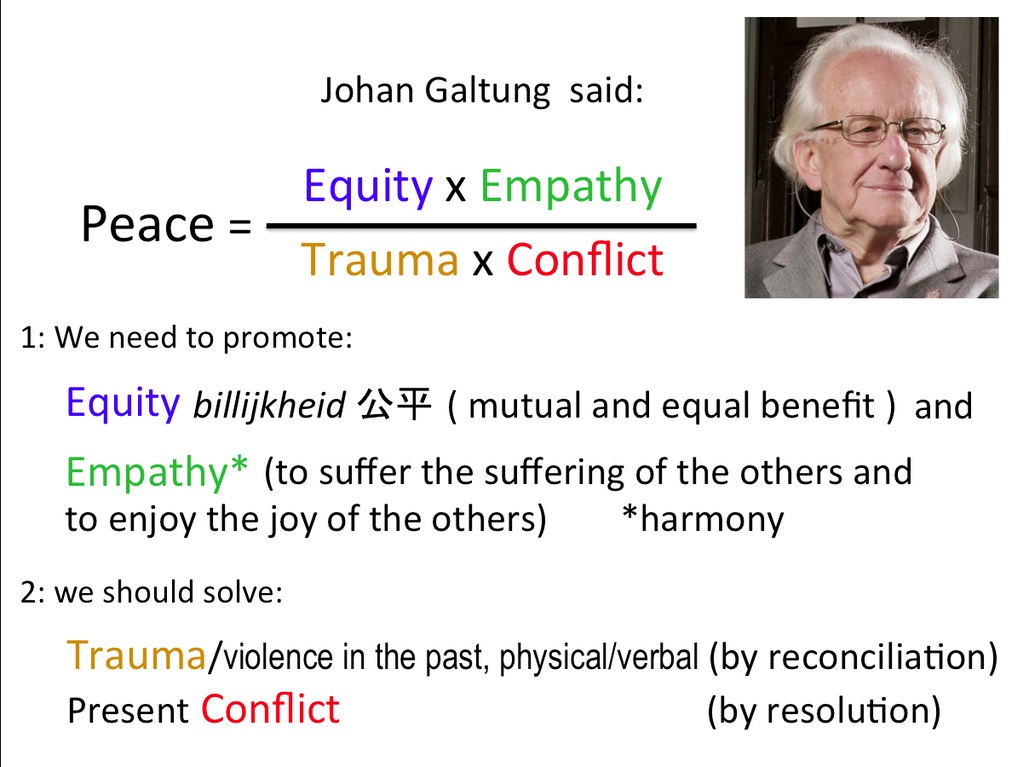 Johan Galtung has conducted a great deal of research in many fields and made original contributions not only to peace studies but also, among others, human rights, basic needs, development strategies, a world economy that sustains life, macro-history, theory of civilizations, federalism, globalization, theory of discourse, social pathologies, deep culture, peace and religions, social science methodology, sociology, ecology, future studies. 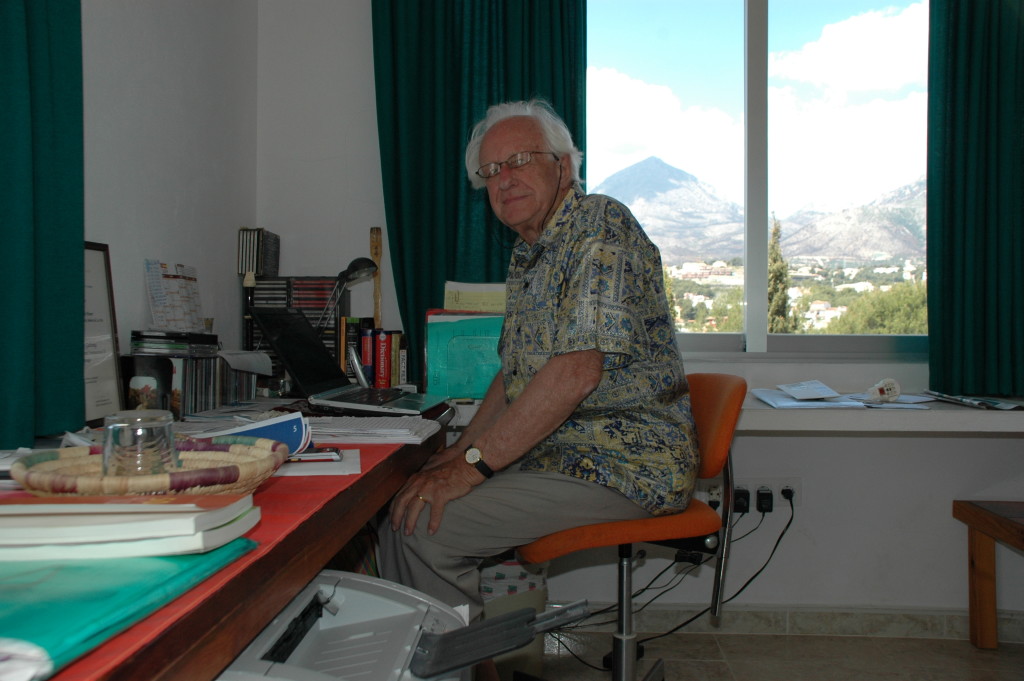 In his house’s office, Spain.

He is author or co-author of more than 1600 articles and over 160 books on peace and related issues, including Peace By Peaceful Means (1996), Macrohistory and Macrohistorians (with Sohail Inayatullah, 1997), Conflict Transformation By Peaceful Means (1998), Johan uten land(autobiography, 2000), Transcend & Transform: An Introduction to Conflict Work (2004, in 25 languages), 50 Years – 100 Peace and Conflict Perspectives (2008), Democracy – Peace – Development (with Paul Scott, 2008), 50 Years – 25 Intellectual Landscapes Explored (2008),Globalizing God (with Graeme MacQueen, 2008), The Fall of the US Empire – And Then What(2009), Peace Business (with Jack Santa Barbara and Fred Dubee, 2009), A Theory of Conflict(2010), A Theory of Development (2010), Reporting Conflict: New Directions in Peace Journalism(with Jake Lynch and Annabel McGoldrick, 2010), Korea: The Twisting Roads to Unification (with Jae-Bong Lee, 2011), Reconciliation (with Joanna Santa Barbara and Diane Perlman, 2012), Peace Mathematics (with Dietrich Fischer, 2012), Peace Economics (2012), A Theory of Civilization(forthcoming 2013), and A Theory of Peace (forthcoming 2013).

Johan Galtung wrote, so far, 164 books on peace and related issues, of which 41 have been translated into 35 languages, for a total of 135 book translations

Antonio Carlos Silva Rosa is the editor of the pioneering Peace Journalism website,TRANSCEND Media Service-TMS, an assistant to Prof. Johan Galtung, and Secretary of the International Board of
the TRANSCEND Network for Peace, Development and Environment. He completed the required coursework for a Ph.D. in Political Science-Peace Studies, has a Masters in Political Science-International Relations, and a B.A. in Communication from the University of Hawai’i. Originally from Brazil, he lives presently in Porto, Portugal. Antonio was educated in the USA where he lived for 20 years; in Europe/India since 1994.

In Violent Region, Music Shop Is an Instrument of Change