In the Declaration of Principles and Programme of Action adopted by the 1976 World Employment Conference it is stated,

“A basic needs-oriented policy implies the participation of the people in making the decisions which affect them through organizations of their own choice.”

Marshall Wolfe of the United Nations Research Institute for Social Development (UNRISD) defines participation as “the organized efforts to increase control over resources and regulative institutions in given social situations, on the part of groups and movements often excluded from such control.”

Among the intellectual “fathers” of popular participation is Ivan Illich and the Brazilian pedagogue Paulo Freire (19 Sep 1921 – 2 May 1997) (l). Illich urged the ‘deprofessionalization’ in all domains of life − schooling, health care, planning − in order to make ‘ordinary people’ responsible for their own well-being.  The strongest affirmation of the superior value of participation over elite decision-making comes from Freire who held that the touchstone of development is whether people who were previously treated as mere objects and acted upon can become subjects of their own social destiny. When people are oppressed or reduced to the culture of silence, they do not participate in their own humanization. 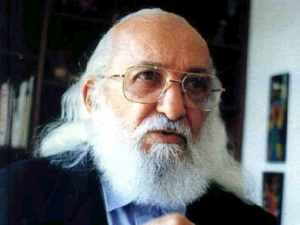 Conversely, when they participate, thereby becoming active subjects of action, they begin to construct their properly human history, and engage in processes of authentic development.  Paulo Freire stresses this inclusion of the marginalized in his discussion of agricultural extension efforts.  The ideal to be sought in agricultural extension is true communication or reciprocal dialogue not the mere issuance of information by expert agronomists to peasants or farmers.

‘Participation’ is a term that is often used in three different ways.  It is sometimes used as in much agricultural extension activities as induced from above by some authorities who usually seek some social control over the process.  Such State-promoted participation usually aims at getting people to produce more effectively.  This is not popular participation in the sense that the Basic Needs Approach uses the term ‘participation’ although in practice State cooperation is usually needed.

‘Participation’ in the Basic-Needs – inclusion of the marginalized sense – springs from below during a crisis and in response to some threat to a community’s values or survival.  Often with no prior plan or precedent, some hitherto passive group mobilizes itself to protest, to resist, to say “No”.  As the world citizen Albert Camus wrote,

“Any oppressed group’s refusal to accept its conditions is always the latent bearer of all affirmations of possible new orders.  To say “no” is to open up possibilities for saying “yes” in a multitude of ways.  Those who begin by saying “No” to their oppressors soon feel the need to utter some “Yes” of their own.”

‘Participation’ in the Basic Needs Approach can also be used to define the catalytic action of third party change agents − technicians, community organizers, missionaries or members of a specialized NGO. Most such change agents view self-reliance of the poor and marginalized as a desirable goal.  Accordingly, they see their own activation of the marginalized as ‘facilitation’ destined to disappear after the people awaken to their dormant capacities to decide and act for themselves.

If participation is to influence decision-making at a level where it makes a difference in national development, there is a necessary transition from the micro, local area to the macro, national planning dimension.  A Basic Needs Approach provides an opportunity for previously powerless communities to enter into national development thinking.  Participation can fruitfully be understood as a moral incentive enabling hitherto excluded groups to negotiate new packages of material incentives in areas such as food, housing and access to education.

Participation − an active role by intended beneficiaries − is an indispensable feature of the Basic Needs Approach to Development Planning.

Kimpavitapress - March 29, 2020 0
A region known for misery also saves lives THE KIVU provinces in the east of the Democratic Republic of Congo have a tragic reputation. Armed...

Being African in India: 'We are seen as demons' By Aleta...

Cameroon: Moving Fast When There Are Short Windows of Opportunity