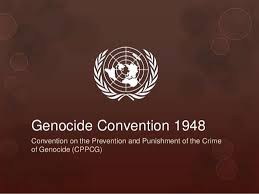 10 December is the 70th anniversary of the proclamation of the Universal Declaration of Human Rights, which has also become a world norm. The Declaration has served as the basis for a number of follow-up conventions, declarations and committees that examine how Governments fulfill their obligations to these world norms.  The Declaration also serves as the framework for a number of highly visible human rights non-governmental organizations. (NGOs)

With these worldwide norms in place, a major focus of Peace Journalism such as TMS is to provide analysis of situations in which these norms are violated by tensions, especially those situations in which current governmental action is inadequate, either bilateral action or action through multilateral institutions such as the United Nations.
There is a certain “been there, done that” as we celebrate the 70th anniversary of these agreements on world norms.  We also mark the 70th anniversary of two world situations on which TMS authors have provided repeated analysis: the creation of the State of Israel and the creation of the Union of Burma.  On Palestine-Israel, TMS authors have repeatedly provided analysis and have set out some proposals for creating more peaceful (or at least, less tense) relations.
We also mark the 70th anniversary of the independence of Burma and note the difficulties of creating a functioning and relatively just State made of a number of ethnic groups: ” national minorities”, some of which would prefer being “national majorities” of independent nation-states.  Currently in TMS, the fate of the Rohingya has been a major focus.  The role of the other “national minorities” continues to be an issue. Some TMS authors have worked with activists from Burma (Myanmar) on the possibilities of federal or con-federal structures for the State.
The current situation of Palestine-Israel and Burma result from the breakup of the British Empire at the end of the Second World War.  A related 70th anniversary is that of the tensions between India and Pakistan, in part over the status of Kashmir.  These tensions have not been a focus of current TMS articles, but the role of India and Pakistan in reaching a conflict-resolution compromise in Afghanistan is real and merits analysis. The recent negotiations on Afghanistan in Moscow brought together many of the key protagonists including representatives from Iran and the Central Asian Republics.
Analysis is never an end in itself.  Much is written in the hope that action will follow analysis.  In most cases, it is hoped that the action will be carried out by national governments. However, most TMS authors have been around long enough to know that governments are not just waiting around for a good idea to be presented.  In fact, there has been a multiplication of “think tanks” nearly all of which have publications to highlight their ideas or who have access to media which will spread their views.
Thus for TMS, the question arises if there are ways that analysis can be transformed into action when governments do not follow up on proposals.  Is there a path of cooperation with activist NGOs?  Many of the TMS authors are or were associated with academic peace research university departments or independent institutes.
Arms control, sometimes called “disarmament”, is the one field in which there was close cooperation among academic research institutions and NGOs making proposals to U.N.-led disarmament efforts.  Since the 1990 end of the Cold War and the end of the USSR, there have been no U.N.-led disarmament activities.  No other peace-research-NGO field of activity has taken the place of disarmament. The human rights NGOs have their own in-house research and information gathering capacities. They have not developed links with academic institutions.
Thus for the 70th anniversary of the Universal Declaration of Human Rights, we can celebrate the strong establishment of world norms; we can look with pride at the quality of analysis available in “think tanks”, academic programs, and made available through publications and other media such as TMS.
However, we know that many human rights norms are not being reached and in some cases are deliberately violated. Thus, our task today is to reflect on avenues of action.
______________________________________

René Wadlow is a member of the TRANSCEND Network for Peace Development Environment. He is President of the Association of World Citizens, an international peace organization with consultative status with ECOSOC, the United Nations organ facilitating international cooperation and problem-solving in economic and social issues, and editor of Transnational Perspectives.
This article originally appeared on Transcend Media Service (TMS) on 10 Dec 2018.

Kimpavitapress - June 21, 2014 0
Since Kenya intervened in Somalia in October 2011, insecurity has spiraled out of control, with attacks (largely targeting Kenyans) becoming commonplace occurrences in Nairobi,...