The 8 November 2020 elections for the two houses of the Myanmar Parliament were carried out with little violence. The National League for Democracy (NLD) headed by Aung San Suu Kyi won some 80 percent of the open seats. The military have one fourth of the seats reserved for their nominated members. This provision of the constitution gives the military an effective veto over any measures that they do not like. There are still a few political figures linked to the military in the small party Union for Solidarity and Development (USDP) , but basically the military are satisfied with their veto power in Parliament and their opportunities for making money in government-related business. There is no political leader of first order in the USDP. Thus, there is little change in the makeup of the Parliament since the previous election of 2015. 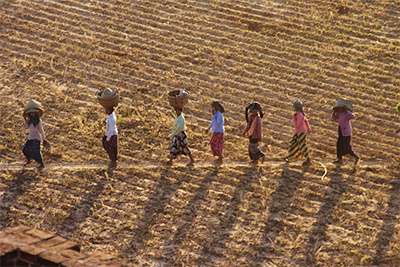 However a large number of people could not vote. The Union Election Committee suspended all voting in some minority areas. It is estimated that over two million potential voters were in these areas where voting was canceled. The largely Muslim Rohingya had already been stripped of their Burmese nationality. Many have fled to Bangladesh both in a 1990 exodus and again more recently. Yet there are still a good number living in Myanmar but unable to vote. There are also a good number of people (estimates are not clear) who are held in internment camps as a result of military-ethnic militias tensions who could not vote. In addition, there are a large number of persons who have moved to Thailand to escape the long years of military repression who could not vote. Thus we must keep the election results in their context.

The governing record of the NLD is very uneven, both in terms of bringing an end to the ethnic conflicts but also in the economic sector. Much of the Myanmar economy is linked to that of China. While there has always been a fairly numerous population of Chinese and Indians in the commercial sector of Burma, the last few years have seen a wave of new immigrants from China starting stores, hotels, and other businesses. However, there is little organized political opposition to the NLD. The government has actively discouraged any other political groups, and critics in the press or social media have been arrested or their actions limited.

The NLD government has made little progress in dealing with the central issue facing the country: in order to create a stable country, there is a need to find a creative balance between the central government and the ethnic minorities. Creating a governmental structure that respects separate cultures and yet sees the need to work together is not easy. The majority ethnic Burman live mostly in the central river valleys – the Irrawaddy plain – while the ethnic minorities – of whom the Karen, Karrenni, Kachin, Mon, Wu and Shan have been most active in the insurgencies – inhabit a large arc along the borders with Thailand, China, Laos, India and Bangladesh. The insurgent forces have often been small, often structured on kinship or village loyalties and rise and fall with bewildering frequency.

Having worked at the U.N. in Geneva in the late 1980s, after the 1988 pro-democracy demonstrations until the mid-1990s with some of the main representatives of the ethnic minorities on a possible federal constitution, I am fully aware of the difficulties of creating new and just governmental structures. My hope was that a younger generation would be willing to develop realistic federal arrangements which would provide for political equality, respect for languages and cultures and autonomy in decision making.

The problem is that this younger generation does not hold power. Those in power both in the government and the ethnic minority structures are unwilling to give up the present status quo with its many opportunities for corruption for an uncharted future. A certain amount of political courage and vision is needed. These are in very short supply. We will have to watch closely to see if there are new voices among those elected to the new parliament who could present new avenues for creative actions.

The Power of the Haitian People WEEK OF SOLIDARITY WITH HAITI...

Kimpavitapress - December 3, 2020 0
View this email in your browser. The Power of the Haitian People WEEK OF SOLIDARITY WITH HAITI December 10 – December 16, 2020 On December 16th, Haitians will...