The often-repeated military coups and unrest on the African continent never surprise anyone. A military coup in Africa has already become a classic system of overthrowing power. 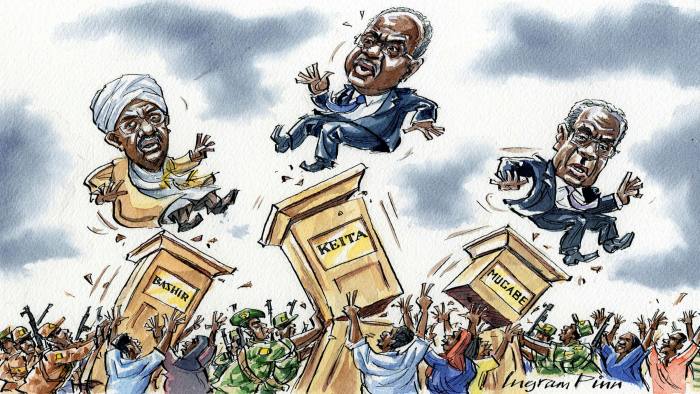 After the fall of the colonial regime, military coups broke out in Africa everywhere; that is why this continent is considered the most explosive and conflicting region. Since 1960, out of nearly three hundred military coups globally, two hundred have taken place in Africa. Most of them are in West Africa, where more than 100 coups took place. In the second half of the 20th century, several dozen wars took place on the continent, and some considered genocide.

Since the beginning of the 21st century, more than a dozen military coups have occurred in African countries. In some States, officers were permanently entrenched at the political summit. In others, military governments replaced each other with enviable regularity. Thus, in March 2003, Ange-Félix Patassé, who was elected the first democratic President of the Central African Republic in 1993, was ousted from power. In September 2003, the military ousted Guinea Bissau President Kumba Yala on a second attempt. In August 2005, due to another military coup, Maaouya Ould Sid’Ahmed Taya lost power in Mauritania. In August 2008, his successor, Sidi Ould Cheikh Abdallahi, was overthrown in the same manner. In December 2008, following the death of Guinea’s President Lansana Conte, a military group led by Captain Moussa Dadis Camara carried out a coup d’état. In February 2010, Niger’s President Mamadou Tandja lost power. In February 2011, Hosni Mubarak, the long-term ruler of Egypt, lost power due to the events that marked the beginning of the Arab Spring. In July 2013, due to a military coup, his successor Mohamed Morsi lost his power. As a result of the events of the Arab Spring, a month before the presidential election in March 2012, the military overthrew the incumbent President of Mali, Amadou Toumani Toure. In October 2014, Burkina Faso’s President Blaise Compaore was stripped of power due to a military coup he organized in 1987. During the coup, Thomas Sankara, his predecessor and former associate, “Africa’s Che Guevara,” gave the country its modern name and came to power as a result of a military coup in 1983. Robert Mugabe ruled Zimbabwe from 1980 as Prime Minister and President from 1987 to 2017. In November 2017, he was ousted and entitled as “the oldest dictator in the world” by the West, and Zimbabwe became one of the poorest countries on the continent.  In April 2019, a military coup took place in Sudan, and President Omar al-Bashir, who ruled for 30 years, was removed from power. On September 5, 2021, officers of the Guinea Special Forces, led by Colonel Mamadi Dumbuya, detained the country’s new Alpha Condé. On August 18, 2020, President Ibrahim Boubacar Keita and Prime Minister Boubou Cissé were arrested in Mali following a riot at a military base near Bamako, the capital of the Republic of Mali. The surprise is not the coups in West Africa but the fact that in other regions of the continent, there are countries such as Botswana, Kenya and Tanzania in which there have never been military coups.

All these shocks do not bring prosperity to African countries and the world in general. Military coups destabilize the humanitarian situation in Africa and restrain, due to fears of political instability, investment in this continent, economic development, leading to a mass migration of the population, not only between the African states themselves but also outside the continent, mainly to Europe.

As a result, all types of threats to modern society are presented in Africa: hunger, piracy, drug trafficking, epidemics and an inexhaustible stream of refugees. The ten poorest countries in the world regularly include predominantly African countries. Despite the natural resources that have attracted Europeans here for a long time, the continent continues to live in poverty and starvation.

Today, there are 55 States on the territory of the African continent. The ethnic composition of Africa is diverse: about 50 nations and nationalities and about 3,000 tribes. Therefore, the massive establishment of dictatorial regimes in African countries is not accidental: only strong power and weapons could keep the country from slipping into chaos and interethnic struggle. Simultaneously with the dictators, another powerful force appeared on the continent – the military. Europeans mainly formed their colonial troops from representatives of the most warlike tribes, which prevented the creation of a single nationwide army. These features are actively used today by various forces interested in regime change and military coups.

Specific evidence of “concealed mainsprings” of coups in Africa may serve as the known details of the recent regime change in Guinea, where the alleged organizer of the coup was Lieutenant Colonel Mamadi Dumbuya, who in the past served in the French Foreign Legion. Several years ago, he was invited to Guinea to lead the special operations forces (GFS) created in 2018.

At the same time, worthy of note is theattempted coup which was the third one in Africa in the last six months, after the recent coup in Mali and then the assassination attempt on the leader of Madagascar.

Regarding Madagascar, it is worth noting that in July 2021, the law enforcement agencies of this state was previously a French colony. After gaining sovereignty, Madagascar remained dependent on Paris, foiled the assassination of the lawfully elected President Andry Rajoelina, involving perpetrators, among whom there were two citizens France: Paul Rafanoharana and Philippe François, the latter, previously served as a colonel in the army of the Fifth Republic in Chad. It is also worth noting that according to some experts, the attempt to eliminate Andry Rajoelina could be associated with the desire of Madagascar, after gaining sovereignty of power, to get rid of the political and economic influence of the former metropolis and with a gradual preference towards Russia and China.

Similar actions of France in organizing a military coup can be traced in the example of the Central African Republic. According to some publications in the African media, evidence is given that Paris is training mercenaries from Chad. In particular, the recent destruction of a group of radicals by the military personnel of the Central African Armed Forces (FACA). The mobile devices with SIM cards of Chadian operators and subscriber numbers from France were seized from the radicals. In addition, a French citizen Juan Remy Quignolot, detained in Bangui by Central African Republican law enforcement agencies on May 10, was found to have a rich arsenal of weapons and ammunition, as well as video recordings of the process of training members of illegal armed groups in combat tactics. All this allowed the CAR authorities to accuse Quignolot of involvement in an attempted coup d’état to restore Paris’ influence on the continent. It was the coordination of these actions that Quignolot was involved in. The materials that Central African Republican law enforcement officers found Quignolot to have, revealed a large-scale plan with which France is trying to regain control of the former colonies and again gain access to the rich natural resources of African states, including the use of the United Nations Multidimensional Integrated Stabilization Mission (MINUSCA) instead of deploying its own troops to the Central African Republic. Coordination issues were handled by the French Ambassador to the Central African Republic, Jean-Marc Grossgurin, who, according to local media reports, collaborated with Mankeur Ndiaye. Head of MINUSCA, who lobbied for negotiations with the militants. According to local media reports, due to the failure of the mission entrusted to Grossgurin by the Elysee Palace, he will soon vacate his post.

Theory 101: Patriarchy as a Structure of White Supremacist Class Rule...

Kimpavitapress - November 26, 2018 0
Danny Haiphong The function of patriarchy is not only to oppress women to the benefit of men but also to stabilize relations under US imperialism...