After 12 months of good and loyal services in the cause of peace and women in the Democratic Republic of Congo, Major Jarin Sultana from the Bangladeshi peacekeepers’ contingent serving within MONUSCO, has  left the host country, on the symbolic date of March 8, which marks the celebration of the International Women’s Day. She is satisfied with the work accomplished for communities in Ituri where she had been deployed.

Since arriving in DR Congo on February 21, 2019, Major Sultana had spared neither skills nor efforts to promote women’s cause and, especially to help bring local populations and MONUSCO together. As Chief of Civil-Military Activities (CIMIC) within the Northern Sector of MONUSCO Force based in Ituri, she set up a vital interaction system between peacekeepers and civilian populations, many of whom still ignored the role of a Peacekeeping Force in a country or province where armed groups are spreading death and desolation.

Major Sultana says, with her team, they have made an important contribution to the local population’s empowerment through providing vocational training and conducting other activities. In addition to the free medical checks organized by contingents in schools or prisons in Bunia, water or school kits supplies, awareness-raising on the fight against sexual violence or the women’s rights, CIMIC activities also included an important training component which covers, among other things, basic computing, cell phone repair, wiring and plumbing, battery-charging, etc.

Major Sultana is very proud of the success reaped by her work: in twelve months, 263 young people (including 43 women) from Bunia and its surroundings attended 14 professional trainings organized by the Bangladeshi contingent. Today, most interns are self-employed or work in different local organizations. They earn an average of $ 200 a month. “The greatest advantage of such training is that it can be completed in a relatively short period of time, while producing a positive, direct and lasting impact in the community,” said Major Sultana. 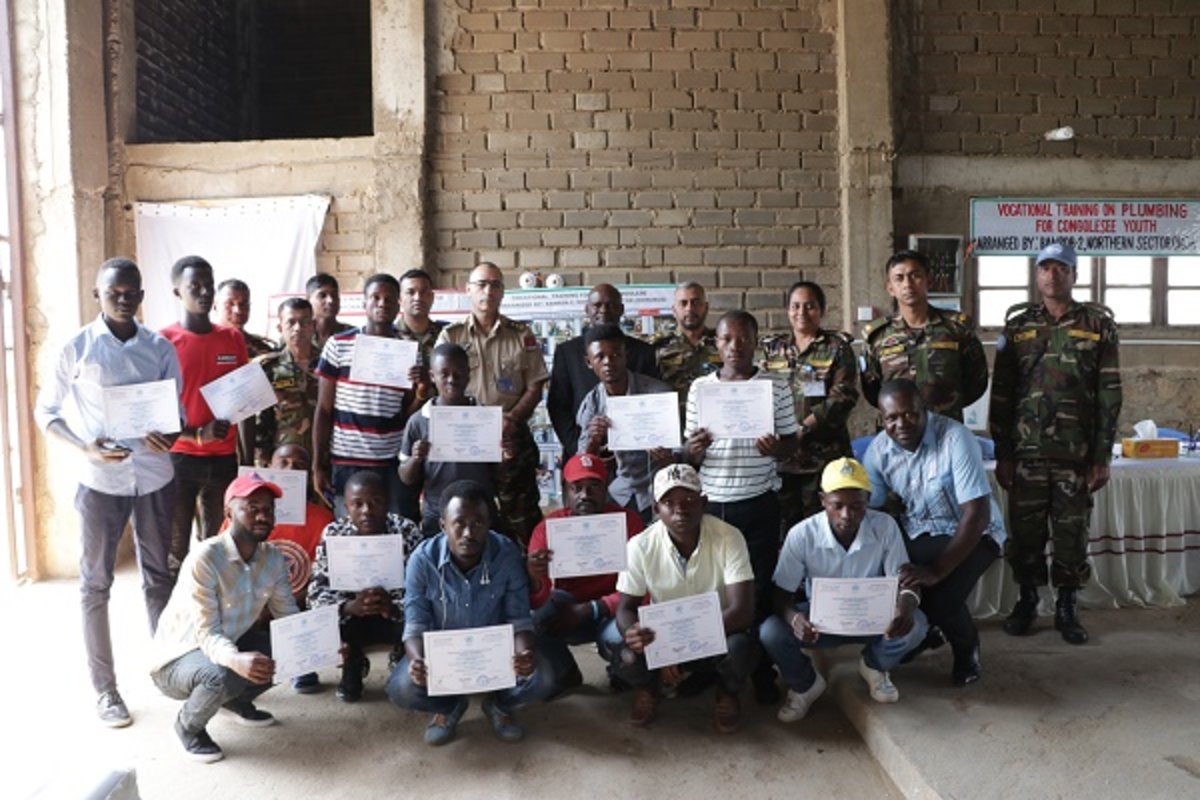 Adreza Anuarite, a young Congolese resident of Bunia, in her late thirties, is one of those 263 young people to have followed these training courses, in particular mobile phones repairing: “I thank the Bangladeshis and MONUSCO for allowing me to follow this training, especially  Major Sultana who has always been personally involved in women’s empowerment; I now have a cell phone repair shop, which helps me to earn around $ 250 a month, “she says.

Jules T. Kabagambe, another 29-year-old intern, said: “I opted to attend this training because there are many NGOs in the city of Bunia today, and whose hiring criteria include, inter alia, IT. Since I had a lot of shortcomings in this area, I had to go to great lengths to get this certificate. Now I can look for a job in a local NGO, and if it doesn’t work, I can start my own automation business and earn a living.”

Although MONUSCO’s strategic priority is to protect civilians, the Mission also works for the empowerment of young Congolese, said Major Sultana who further indicated: “after having received trainings in different areas, these young people are now prepared to live a peaceful life and not to join armed groups any more. ” To maximize the impact of these trainings, Major Sultana carefully and meticulously plan the activities with local authorities.

As a peacekeeper, Major Sultana is also sensitive to gender issues. Throughout her twelve months spent in Ituri, she frequently visited the areas where women and children are affected by the acts of violence. During her many interactions with women and girls in Ituri, discussions focused on hygiene as well as reproductive health, medical care during pregnancy, sexually transmitted diseases or even Women’s rights.

In recognition for her constant commitment, her selfless dedication and professionalism, Major Sultana received the “Force Commander’s Certificate of Appreciation“: a reference for peacekeepers!

When leaving the DRC, Major Sultana said she was satisfied with her mission within the United Nations: “ I am happy to have served as a blue helmet. Thanks to my work, young Congolese are now able to generate income for their families. This program will prevent them from joining armed groups and engaging in violence … I am proud of what I have achieved in MONUSCO “.

Kimpavitapress - August 6, 2017 0
The deliberate destruction of Libya was a war crime by all standards of international law. That country was just one victim of the American...

KALABA RESIGN SHOULD GO FURTHER UP TO THE ROOTS CAUSE OF...

A snippet of an article about Dubai from the Independent By...