Nyatiti is an eight-stringed plucked lyre from Kenya. It is a classical instrument used by the Luo people located in the Nyanza western region in Kenya. It is about three feet long. The player of Nyatiti holds it to his chest, seated on a low stool, with the base firmly to the ground. Usually it is played together with the oporo, a curved horn.

Goyo Otenga is the dance for Nyatiti music. Otenga is the Luo word for eagle. Dancers move their shoulders, arms, fingers, legs and feet like an Eagle.

The performer has three tasks when playing the Nyatiti: percussion, strings, and vocal.
The Nyatiti is played sitting low to the ground, while keeping a small distance from your body. You also put iron bells called "gara" on your right ankle and a metal ring called "oduongo" on the big toe of your right foot. Then, you sing and play keeping the beat by tapping the ring on the edge of the Nyatiti. The Nyatiti is also called Kanbanane. "Kanba" means string and "nane" means eight, so it literally means "eight strings".
The body is made of a hollowed fig tree and is like a hemisphere. Cow skin is put on the surface of the hemisphere. Nylon fishing lines are used for the eight strings, which have three thicknesses. In the past, female cow’s Achilles’ tendons were used for the strings instead of the fishing lines. Two thin bamboos like sticks and wood chips are bonded together by bee wax, which creates a deep echoing sound. There are reasons why the Nyatiti has eight strings, why only men are allowed to play it and why it is called "Nyatiti". The first four days after a male’s birth and after his death are said to be very special in Luo culture. In Nyatiti, the lower four strings represent the first four days of his birth and the upper four strings represent the four days after his death.
Source Anyango Website http://anyango.com/e/nyatiti/ 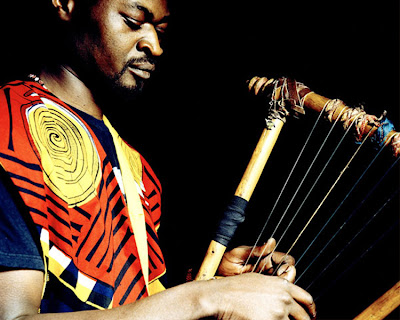 Ayub Ogada is one of the few Luo music artists who have made it both on the national and international music scene. Here he plays the nyatiti to one of his famed songs Obiero

And this lady from Japan could not resist—

Once A Symbol Of Freedom, Sudan's Pop Radio Station Has Fallen...

Kimpavitapress - July 11, 2019 0
Enlarge this image When Omar al-Bashir was ousted from the Sudanese presidency in April of 2019, there was an explosion of new culture in Sudan....