Minibus driver Hussein Fahmy Bakari, 20, disappeared on December 5, 2021 as he drove from the coastal town of Mombasa to Kenya’s capital Nairobi some 500 kilometres away.

No one has heard from him – or his colleagues Masuo Bakari, 21 and Hussein Mohamed Hussein, 22 – since.

The three young men are believed to have been abducted on the main highway in the area of Maungu, about 100 kilometres north of Mombasa.

“Their vehicle, a Toyota Crown was found abandoned by the roadside with everything in it intact,” said Bakari’s mother Zahara Oma, weeping.

“We do not know their whereabouts, what they are eating and what is happening to them,” she continued, explaining that all three were minibus drivers or touts in the largely Muslim area of Kisauni in Mombasa county. Omar said that there was no reason to believe that they had been involved in any suspicious or illegal activities.

“My husband has been traumatised by the sudden disappearance of our son and he has been spending time at the bus station hoping that he might return soon,” she continued, adding that the family now fears their son is gone and may never come back.

“We only hope that wherever he is, he is well and that one day he will return in one piece,” Omar said. 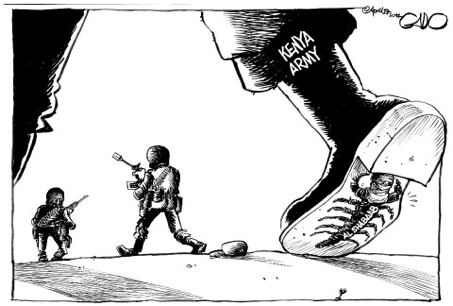 Kenya has been rocked by numerous terrorist attacks in recent years, often by the Somalia-based al-Shabab militant group who frequently exploit the porous land borders in Lamu, Garissa and Mandera counties to access the country.

“Most of those who disappeared are male and Muslim,” said Alexander Mbela, a human rights defender working for Haki Africa in Mombasa. Enforced disappearances have been particularly prevalent in largely Muslim areas of Nairobi as well as the Kenyan coast, and while most involve young men in poor neighbourhoods, well-to-do members of the community have also been targeted.

“Even though we are not sure that the government is involved, there aren’t many people who would have the audacity and courage to abduct someone in broad daylight except government operatives,” Mbela said.

“Many of the cases of enforced disappearances take place in the context of operations against perceived members or sympathisers of the radical extremist groups such as the Somalia-based Islamist militant group, al-Shabaab.”

Missing Voices, a coalition of human rights organisations lobbying against extra-judicial killings in Kenya, said that it had documented 227 disappearances since 2007. Only around one in three of all those abducted returned alive.

“The return of a victim is dependent on the kind of protests made after a victim’s disappearance. The more silent people are, the higher the chances of not returning,” said Zaina Kombo of Missing Voices.

A public outcry appears to have aided in the release of Somalian scholar and Horn of Africa expert Abdiwahab Sheikh Abdisamad, who was seized by unknown assailants on September 8 and bundled into a pick-up truck in a Nairobi market.

Following widespread outrage, he was released after more than a week in captivity. A traumatised Abdiwahab declined to give details about his abduction, saying only that his captors had warned him not to talk to the media or comment on regional politics in the future.

Bwire, who had been serving a ten-year sentence for terrorism offences, disappeared soon after he left the prison.

Following protests by his family and the Law Society of Kenya, Nandwa was later released and found in the town of Mwingi some 200 kilometers north east of Nairobi. As with many former captives, he refused to give any details about his ordeal. Bwire’s whereabouts remain unknown.

Mvita lawmaker Abdulswamad Nassir has long campaigned against enforced disappearances and said that he held the government responsible for the phenomenon.

“While it is true that there are bad elements in society, the state must cease from acting as judge jury and executioner and follow the law in the prosecution of the suspects,” he said.

He has led efforts by Muslim dignitaries to protest the abductions, and said he would lobby in parliament for police inspector general Hilary Mutyambai to be dismissed over the abductions.

“Why can’t the state just follow the law and charge those whom it suspects of engaging in radical extremism activities?” he asked.

Some see the government’s efforts to deal with militants as being hampered by a slow judicial process that can see terrorism-related cases cases drag on for years.

“The security forces are probably too tired to go to court and that is why they resort to enforced disappearance and this is a matter [that] as a country, we should all address with a view to bring it to an end,” Nassir concluded.

Article 29 of Kenya’s constitution guarantees citizens the right to freedom and security, which includes the right “not to be deprived of freedom arbitrarily or without just cause; subjected to torture in any manner, whether physical or psychological; or treated or punished in a cruel, inhuman or degrading manner”.

Kenya signed the International Convention for the Protection of All Persons from Enforced Disappearance treaty in 2007, although it is yet to ratify it.

The government has strenuously denied claims that it has been involved in enforced disappearances.

“It is convenient and easy to attack the police because they represent the face of the government, however, the police are a law enforcement agency that works within the confines of the law and in conformity with the constitution,” said national police spokesman Bruno Shioso.

He said that if the police wanted to arrest any suspect, they would do so formally and respecting their human rights.

“There is a possibility that those who disappear are abducted by their own criminal groups and it is an issue that government in general is concerned about,” Shioso said.

A Radical Approach to the Climate Crisis By Christian Parenti

Kimpavitapress - June 1, 2014 0
Several strands of green thinking maintain that capitalism is incapable of a sustainable relationship with non-human nature because, as an economic system, capitalism has...

Defining Refugees in the Era of Climate Displacement