Home Action alerts In memoriam: Shams Bhanji
Share
Facebook
Twitter
Pinterest
WhatsApp
Linkedin
Email
Print
Tumblr
Dear friends
We are sorry to have to inform those who knew him that Shams Bhanji died at the age of 74 at his home on his beloved Zanzibar Island. 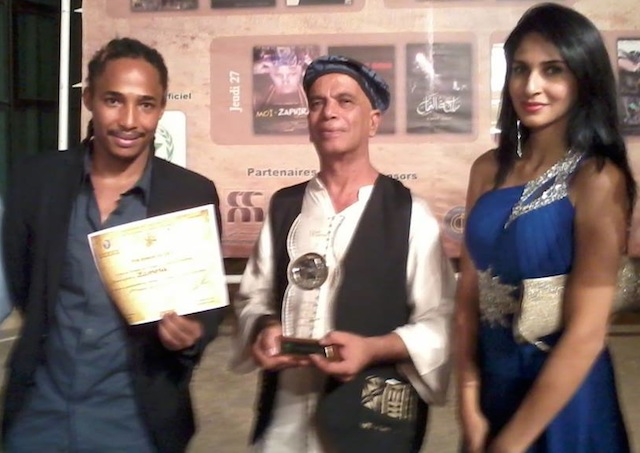 Shams lived a colourful life and spend many years abroad, far from his native Kenya, although he was born in Zanzibar. He would always tell us he was an East African as he came into this world when East Africa was still united. We never found out which year he was born. For some reason he was always evasive about telling us, grumbling that we should piss off. He was good at acting this way, grumbling and complaining. More often than not it was rather meant in a funny way. But it stuck to him, this grumbling demeanour, mixing it with a good sense of humour and cynicism. All we knew was that he was born on the 29th of February, which meant that Shams only had a birthday once every four years, which kept him forever young. Being peculiar and different than others fitted him. He probably cherished the idea to be an uncommon character, as if he had walked right out of a Fellini movie. With Iranian, Indian and Zanzibari roots – proudly East African – he looked the part, a mixture of different cultures which manifested itself in his character. 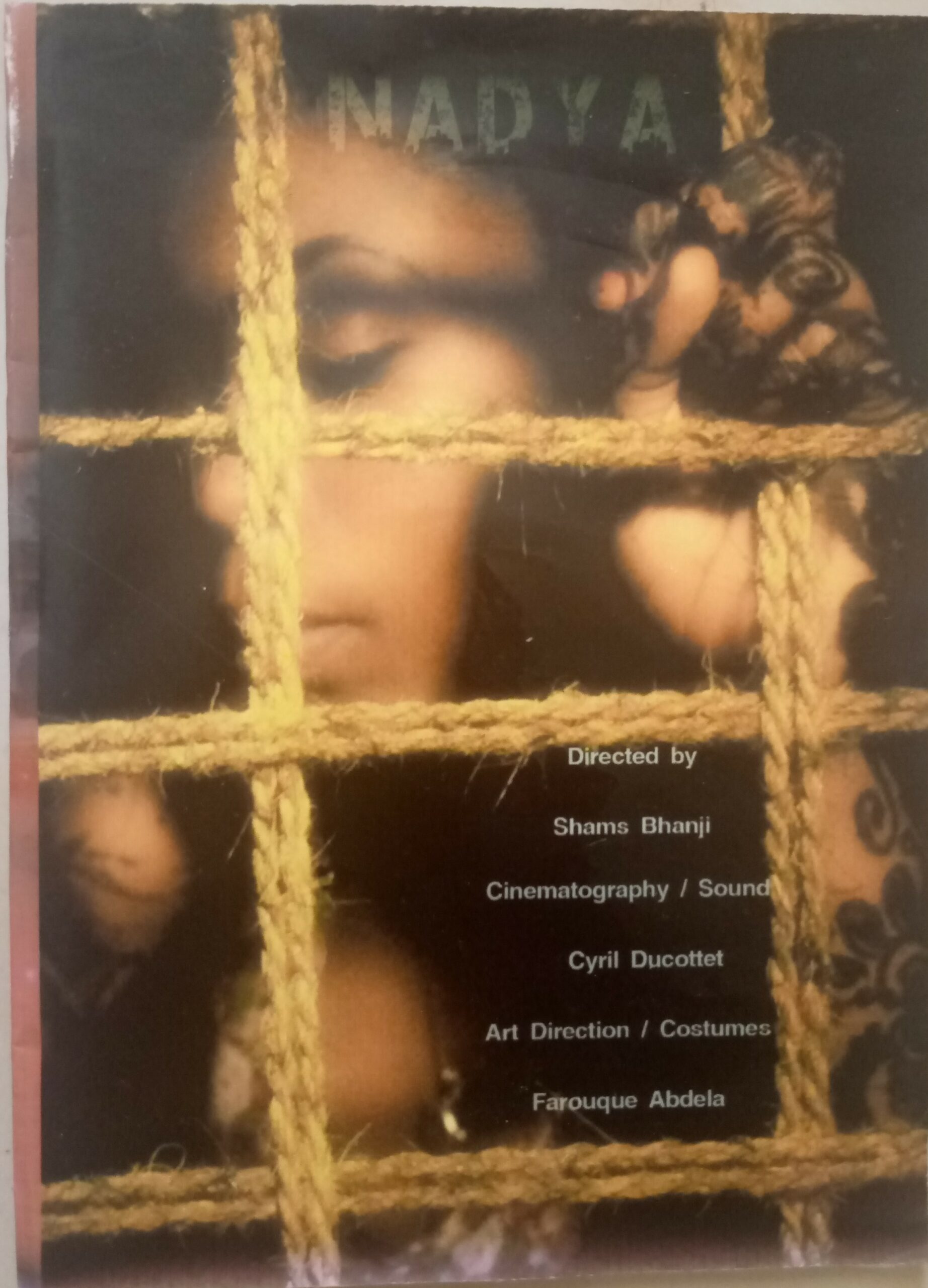 As a young boy he got mesmerized by film because his father would publicly screen 16 millimetre movies at their home while living and working on a tea plantation in Tanzania. So when he got older his mind was set; his future lay in everything related to image, be it through photography or film. This passionate dream made him to visit and live in different places in the world throughout his life. Still a young man his first adventure was India, looking for his roots but finding the magic of love instead and embracing it as much more interesting. He was good at following his deepest desires, even when there was opposition to that behaviour. He would always do what his heart told him to do, which was rare in a society prone to conformity. Shams – a genuine and hopelessly romantic sweet talker – easily fell in love with the belles that roam this earth.
In the early 1980’s he moved to the US after marrying an African American civil rights activist. There he got his first taste of working in film when he assisted in the making of a documentary focusing on Werner Herzog’s 1982 movie Fitzcarraldo. It brought him to Brazil for some time. The films of Herzog had a big influence on Shams, as he liked his slow-paced masterpieces full of mad characters, often with the unpredictable ‘madman’ Klaus Kinski in the leading role. Shams’ sweet talk character helped him when Hollywood came to Kenya in 1984 to shoot the blockbuster film Out of Africa, starring Robert Redford and Meryl Streep. Although by then he had had no formal film schooling, he wiggled and hustled his way into the production, working in all the different departments and even taking on an acting role as waiter in the train scene. Sadly his part got cut out in the final mix, denying him an official credit in this seven times Oscar winning flick. But the experience made his resolve stronger to go and study film. Between 1988 and 1992, simultaneously, he managed to study at film schools in Denmark and England. 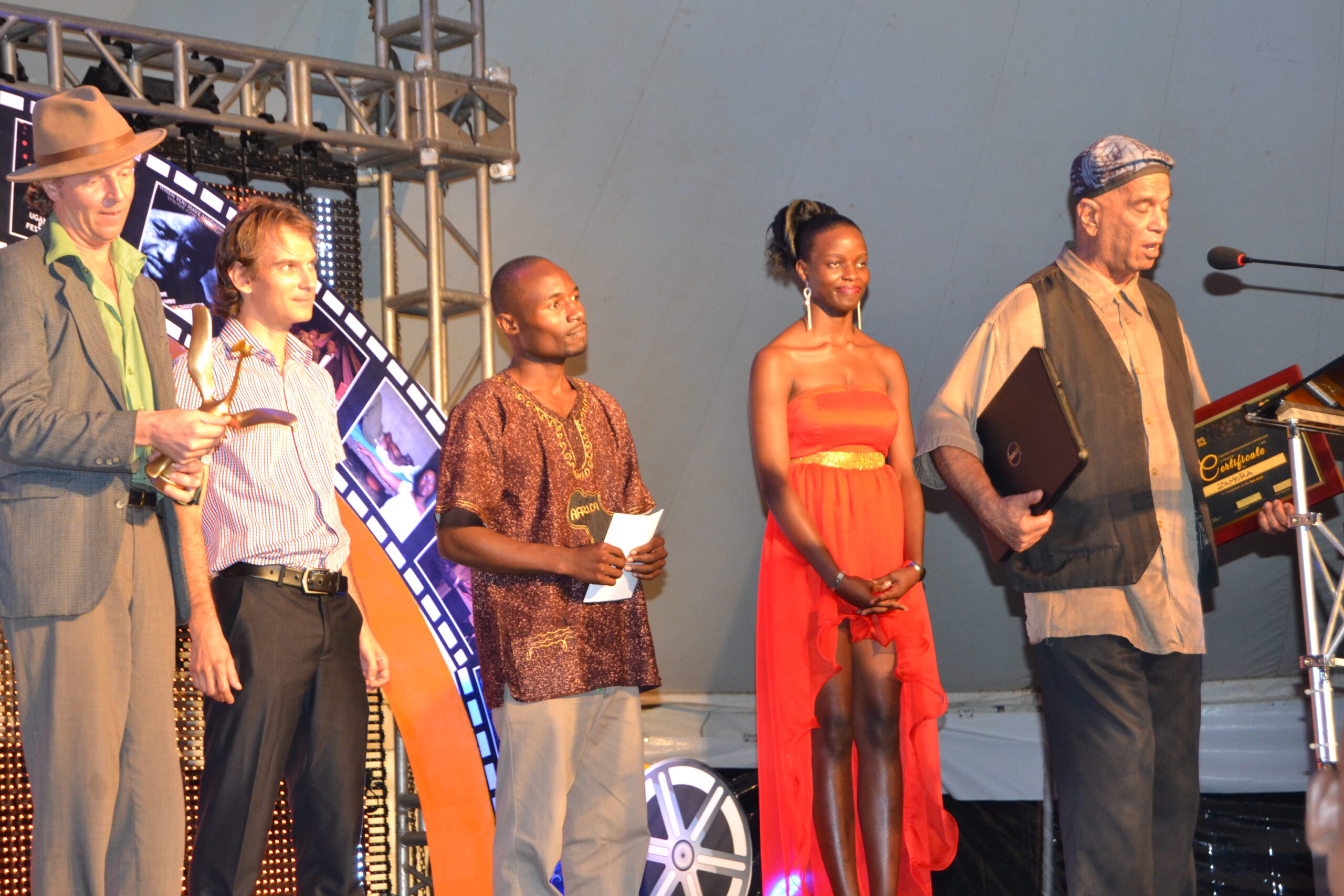 After his European adventure he came back to Nairobi Kenya and started a photography company specialising in photo shoots for Kenyan fashion magazines. He had a conceptual eye for casting beautiful stylish women, often presented in a dreamlike fashion. His personal and appraising style of talking made him get the best out of his models and actors. Being successful at it bigger jobs awaited him. A well known hotel chain owning several tourist hotels at the Swahili coast gave him a big photo and film job. Shams was allowed to freely express his romantic style commercially, mixing beautiful images of people into a poetic storyline. Attracted to the laissez faire atmosphere of the Swahili Coast he decided to go and live there and invest the money he had made in a dhow, to sail the Indian Ocean and make his money with tourism. He envisaged a long and happy life there, but it was not to be. A rich ex-lover from Nairobi wanted to destroy him and almost did. Through crooked ways she managed to make him loose his dhow and he even had to fear for his life. Totally disillusioned he escaped to Kampala, Uganda in 2003. 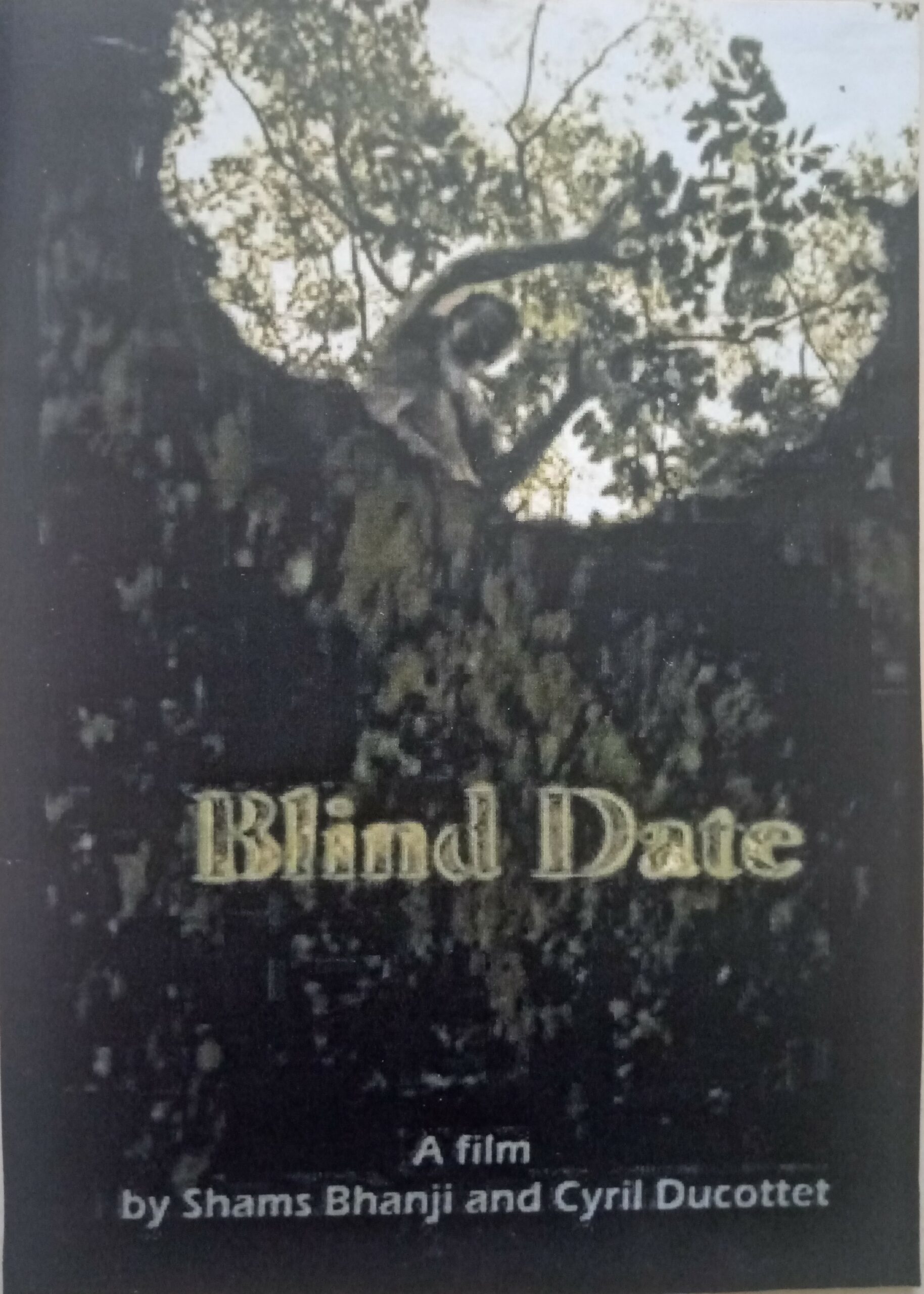 With so much professional and emotional baggage he soon started connecting with creative forces in the Pearl of Africa, making money with photo shoots, but also doing short fictional films. He started off with a three part series called the ‘moments’ project. In it he collaborated for the first time with French filmmaker/editor Cyril Ducottet. The series was shown at the inaugural 2004 Amakula Kampala International Film Festival. A year later they both asked me to write a script based on Shams’ dramatic adventure at the Swahili coast. While trying to find a producer for Zamora in the ensuing years the three of us made several short films: Saved by the smoke, The Ball, Through my eyes (4 shorts in one), Blind Date, Hopeless, Lollipop, Metamorphosa and The enchantress. But it took up to 2011 before the dream of making Zamora came true. A year earlier Shams had left Uganda and moved to Zanzibar. It was a smart move as there he found a producer, ZG Productions, willing to finance our movie. 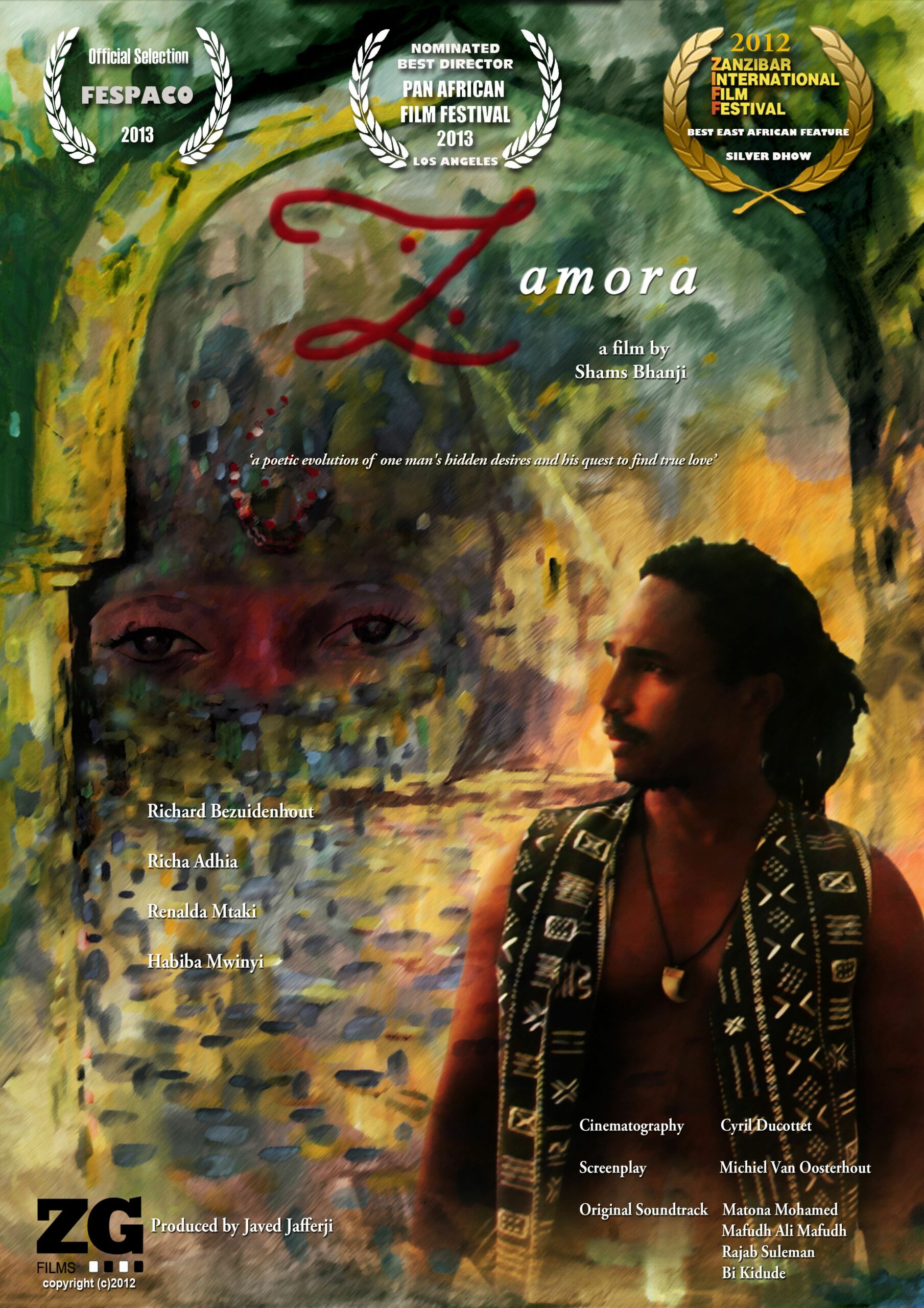 Zamora can be seen as Shams Bhanji’s swan song, although he did make another movie with Cyril a few years later called Nadya. Zamora however was an amalgam of all his life’s experiences, pent up emotions and professionalism culminating in a burst of great creativity. Filmed during Ramadan on Zanzibar Island it featured a handsome cast of young energetic actors, showcasing – besides an exciting storyline of love, deceit and dark magic – the beauty, sights and sounds of the spice island. Legendary Zanzibari musicians like Bi Kidude, Matona and Mahfud contributed music to it and the prominent designer Farouque Abdela also gave acte de presence. Zamora won Shams six awards in Africa, two each at the Uganda and Zanzibar Film Festival, and one each at two of the most prestigious African film festivals of FESPACO (Burkina Faso) and Khouribga (Morocco). The latter festival gave him the special prize of the jury stating that Zamora ‘stood out for its originality, its poetry and its imagery’.
When he phoned us back in 2013, both after winning at FESPACO and Khouribga, it was clear he was in the seventh heaven. His dream had come true, and as his dream had become our dream as well, we understood exactly how he felt. We knew he deserved it and were proud that we had formed a great team with him and had escorted him to his personal triumph. We will always remember him, not only for this great film, but also for the remarkable character that he was. He lived a life that was exciting and eventful. He drank from a cup that was filled with sweet nectar and he didn’t let anyone stop him from lavishing himself at that source. Now he is in the heavens. Bless him and may he rest in peace. Inshallah.
Michiel van Oosterhout & Cyril Ducottet

Museum of Black Civilisations in Dakar to foster the ‘dialogue of...

Kimpavitapress - December 12, 2018 0
A museum showcasing black heritage from the dawn of time to the modern era has opened in the Senegalese capital Dakar. The opening came as African...

Suicides on the rise among South Sudanese refugees in Uganda