In the 1960s Algeria promoted itself as a “Mecca for revolutionaries.” Allegedly, it was not uncommon to run into freedom fighters such as Nelson Mandela and Amilcar Cabral on the streets of Algiers. And in 1969 the city hosted the pan-African festival of culture, Panaf, which brought together many liberations movements from the “Global South” that based their struggles on ideological constructs with Africa as point of reference. In this text Cedric Vincent looks at how this festival tried to sever all connections with the old colonial powers, and its shortcomings. 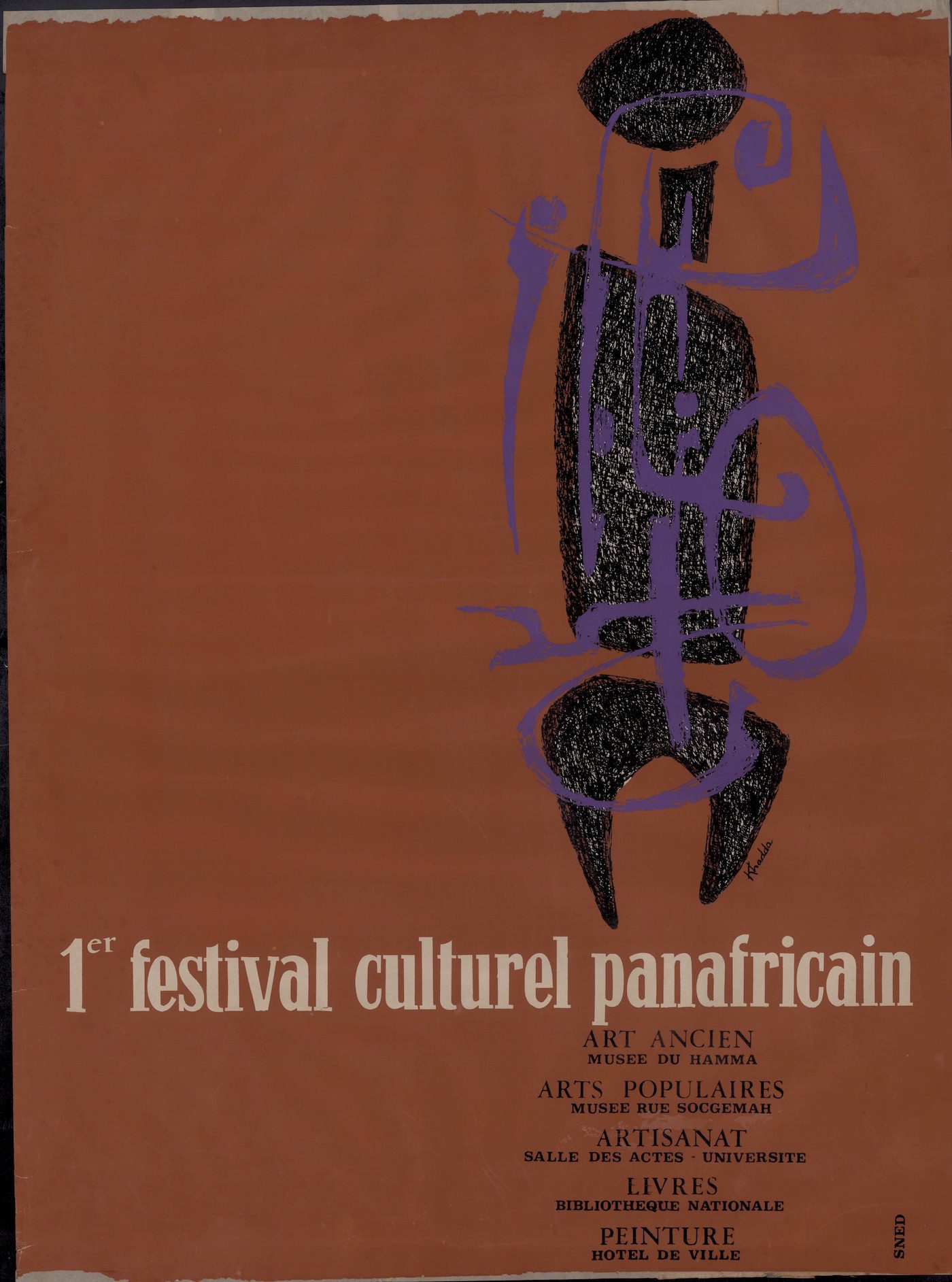 Poster of the 1st pan-African festival of culture in Alger. Courtesy of PANAF archive.

On 21 July 1969, an event took place in Algiers that was of the utmost significance for the political, cultural, and artistic scenes in Africa and, more generally, in the countries of the so-called Third World. Yet the majority of people had their eyes trained on the heavens, because on the very same day Neil Armstrong and Edwin Aldrin had just set foot on the moon—which, let’s face it, interfered with the media resonance of this first pan-African festival of culture. For 10 days or so, the “Panaf,” as it was nicknamed, was the center of a world in the process of creating itself, of discovering a sense of cultural and political pride, of belonging, and the ability to exert an influence on the world. The tumult and emancipatory excitement generated by this event were captured by William Klein in a documentary entitled commissioned by the Algerian government. The film is still the best record of this scintillating moment.

In 1967 the Organization of African Unity decided to hold a pan-African cultural festival bringing together delegations from its member states. The Panaf nevertheless introduced an additional element. It was an opportunity to bring together the official representatives of the different countries but also between the liberation movements, notably of Angola and Guinea-Bissau, the ANC, and even the American Black Panther Party and Fatah from Palestine. The concerns of the organizers echoed those of the Black American creatives and activists (in the USA as well as in the Caribbean and Latin America). While they needed to fight for equal rights in their respective national arenas, these militants based their struggles on ideological constructs, with Africa standing as the ultimate point of reference.

Three years after the famous World Festival of Black Arts in Dakar, the Panaf made use of a similar scheme. Visitors were offered a range of events, including concerts (notably by Miriam Makeba and Nina Simone and free jazz with Archie Shepp, in addition to traditional African music), exhibitions of art both ancient and modern, plays and films, as well as ballet and folk dance, all culminating in a major symposium reflecting on “African culture, its realities, and its role in the struggle for liberation and independence, in the consolidation of African unity, and in Africa’s economic and social development.” To mark the occasion, Algerian president Houari Boumediene, who had come to power through a coup in 1965, gave a speech on African unity. “This festival is not merely a program of entertainment, which might serve to distract from our joint efforts,” he said. “On the contrary, it is intimately related to the campaign that we are waging together in Africa, a battle for development and national liberation.” Far from being an event solely designed to celebrate pan-Africanism through culture and arts, the festival was meant to take on a real political dimension with a continental or even global focus. 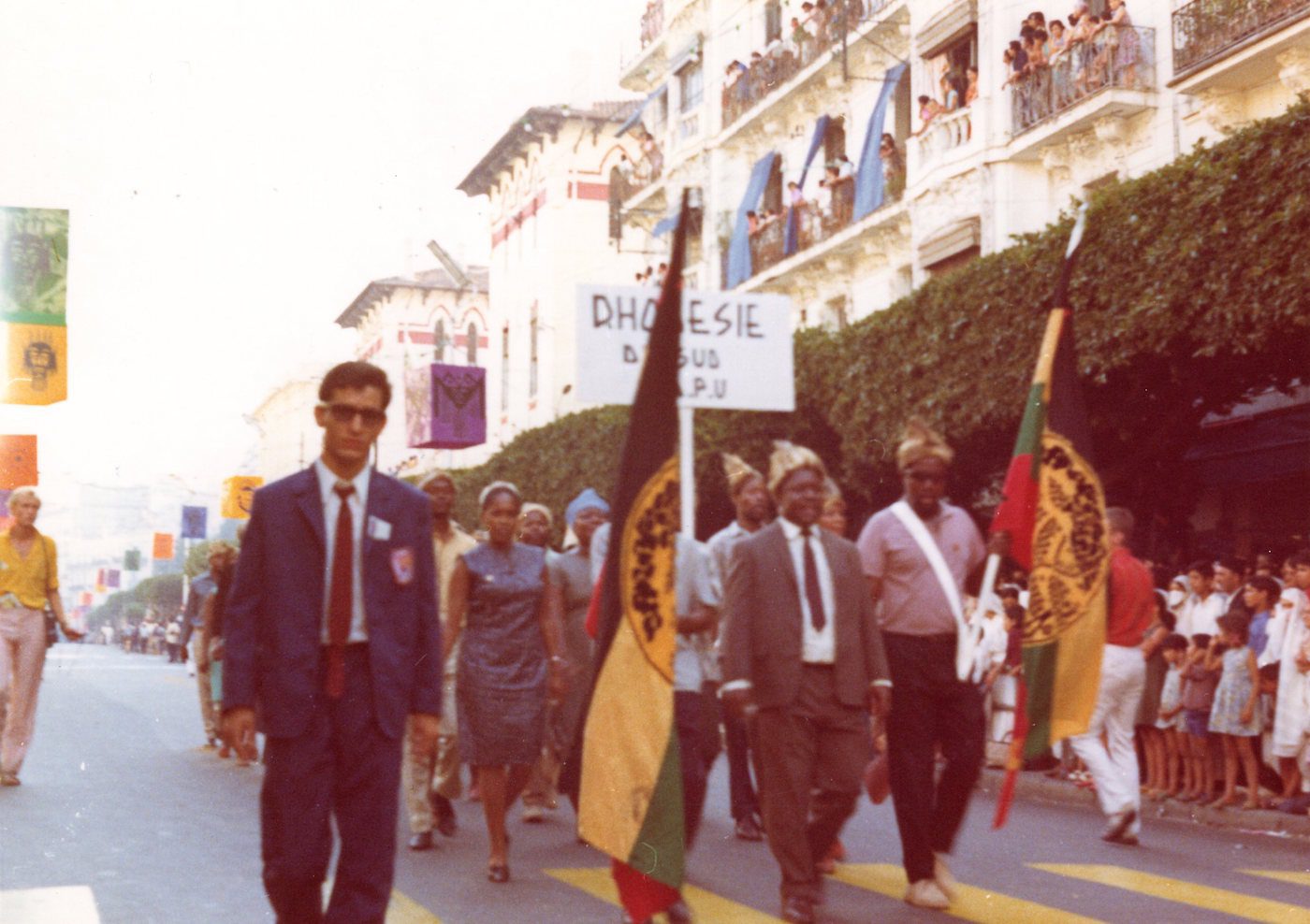 This aspect of the event should not, however, obscure another facet: the crucial role the festival played in establishing the power of the new regime. In geopolitical terms, the festival was a spotlight focused on Algeria during its bid to become leader of the Tricontinental movement at the expense of Cuba. Algiers tactically nurtured its image as a “Mecca for revolutionaries.” It was not unusual to run into legendary figures on the streets of the city—people like Nelson Mandela, Mario de Andrade, Amilcar Cabral as well as those in the Western world who were fighting against dictatorship, like Mário Soares, who would go on to become president of post-dictatorship Portugal. Not to mention Che Guevara, who had traveled there in 1964, bolstering this image, and the presence of a group of Black Panthers in exile led by Eldridge Cleaver.

As a result, the Festival of Algiers was seen symbolically as an event that intended to demonstrate a split with the World Festival of Black Arts (1966) whose connections with the old colonial powers were considered overly compromising. Bear in mind that Algeria did not take part. It should be noted that Panaf is remembered as having been a veritable indictment of “Négritude”. The sharpest attacks came during the symposium and were delivered by Sékou Touré, Stanislas Adotevi, René Depestre, and Henri Lopes, who proclaimed the “death of Négritude,” a concept and political instrument ill suited to contemporary African reality. Algiers thus seemed to be the dramatic setting for a generational split and the emergence of a new international consciousness. The presence of Miriam Makeba, after her purported refusal to take part in the Dakar festival, reinforced the image of a counter-festival. Be that as it may, Algiers carried on the experimental work started in Dakar, continuing it, complementing it, and revising the options set out in 1966 as a way to construct the postcolonial societies of tomorrow. (This series of festival laboratories would come to an end in Lagos in 1977 with FESTAC, the Second World Festival of Black Arts.) It is for these reasons that the relationship between the two festivals should be examined in a more nuanced way than might be suggested by the promotional image that Panaf fostered.

Cédric Vincent is an anthropologist and postdoctoral fellow at Centre Anthropologie de l’écriture (EHESS-Paris), where he co-curates the Archive of Pan-African Festivals program supported by the Fondation de France.

Kimpavitapress - February 3, 2020 0
Here is a Table with fifteen faiths organized according to mono-poly-pan-atheism; some might find the table somewhat controversial: Table 1.  Figures of thought, faiths, and beliefs...

WHAT EXACTLY HAPPENED IN ARUA? MY STORY!