In an explosion of anger and political rejection, 200,000 people marched in Paris Nov. 28 while another 300,000 in over 95 cities and towns across France held coordinated protest marches. Demonstrations also took place in front of French embassies in the Netherlands and Germany. 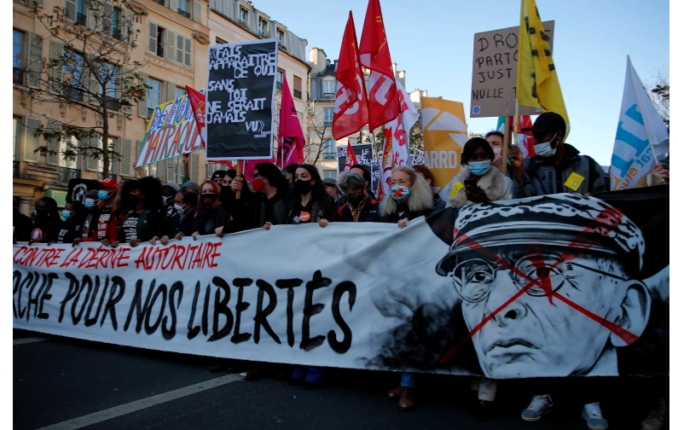 The protests were targeting Article 24 of a new French security law that essentially makes it illegal to film any actions of the police. Anyone who puts a cop’s “face or any other identifying element” on the Internet and causes that cop “physical or mental harm” could be fined $18,000 U.S. (15,000 euros) and a year in jail.

The call for protest came from several associations of journalists and was endorsed by major French trade union federations, anti-racist groups like the Adama Foundation, human rights organizations and a number of left-wing and socialist parties.

In early June, an anti-racist demonstration by the Adama Foundation – a group focused on the death of Adama Traoré, a Malian immigrant who died being “questioned” by the police – drew around 60,000 people. The Nov. 28 organizers had not expected larger crowds.

The cops, showing their repressive inclinations, had opposed even granting a permit for the Nov. 28 Paris march, alleging Yellow Vest and Black Box “provocateurs” would come. They were overruled by the courts.

On Nov. 20 the National Assembly gave preliminary approval to Article 24. The next day, journalist groups put together some small preliminary demonstrations in several French cities. The cops clamped down on these, arresting 23 people.

On Nov. 23 the cops brutally broke up an encampment of homeless migrant people on the Place de la Republique in Paris. Videos on the mainstream nightly news, as well as on social media, showed cops tripping people, kicking them, beating them, and tearing up their tents. The majority of im/migrants into France come from Africa.

The videos were so shocking that Minister of the Interior Gérald Darmanin had to issue a tweet later that evening saying that the cops were going to investigate this “shocking” incident.

On Thursday, Nov. 26, the web news service Loopsider released videos of prominent French hip-hop artist and Black entrepreneur Michel Zecler being beaten by three cops. This beating was so shocking, so repulsive, so “unjustified” that it went viral, with over 14 million views by Friday evening. (tinyurl.com/y35rmndr)

All marchers interviewed by French national television, channel TV2, said they had seen the video and that they were moved to march because of it.

That 500,000 people came out into the streets to protest the police and their racist actions put tremendous pressure on the French government. President Emmanuel Macron posted on his personal Facebook page that he was ashamed of the police action and was ordering a report on the beating of Zecler.

Marchers generally felt that Article 24 would make the cops immune from prosecution. As one sign put it, “Cops fuzzed out, justice blinded.”

FranceTV Info, a newsletter sponsored by mainstream television networks, has tried to get information on how many complaints about police abuse are made and how many of these complaints lead to a formal case. (tinyurl.com/yybosojd)

The newsletter indicates that for 2019, during the Yellow Vest actions, there were about 3,000 complaints, but these led to less than 100 cases being filed against the police. A number of signs carried in the Nov. 28 march referred to the vicious attacks by French cops on the Yellow Vest marchers after that mass movement for economic justice began on Nov. 17, 2018. Scores of protesters lost an eye or a limb because police targeted them with flash-bang grenades. Hundreds of Yellow Vest activists are still in prison on heavy charges.

While most of the Nov. 28 march was orderly, with union contingents mixing with human rights groups and anti-racist contingents, there were some sharp confrontations with the cops toward the end of the march, after the sun had set. Police violence continued, including cops smashing a Syrian photojournalist in the face. A building belonging to the Bank of France, the government’s central bank, was set on fire.

#BringBackOurGirls: Beyond the Hash Tags By Louise Uwacu

Kimpavitapress - May 28, 2014 0
Who wouldn't want to save some kidnapped girls from some terrifying terrorists? NO one sane! So of course America wants to save the abducted...

#CelebrateAfrica | Revealing the folly of humanity with Maroussia Mbaye