6 May 2016 – On a visit to Haiti in late April with Task Force on the Americas, a California-based organization in solidarity with the social justice movements of Latin America and the Caribbean, we witnessed another example of Haitians resisting US attempts to facilitate continued looting of the country’s resources and sabotage its democracy.

Democracy has been sorely missing in the island nation ever since the 2004 coup d’etat backed by the US, France and Canada, which ushered in a 2-year reign of terror, followed by the unjust exclusion of Haiti’s largest and most popular political party, Fanmi Lavalas, from participating in any elections until August and October, 2015.   The most recent president, Michel Martelly, had been pushed fraudulently to the forefront of sham elections in 2011 by then-US Secretary of State Hilary Clinton.  Haitians we met with did not appreciate this interference, as he stole public funds, privatized valuable natural resources, and instituted a paramilitary security force reminiscent of the notorious Duvalier era.

The October 25, 2015 first-round presidential election was riddled with massive irregularities, voter intimidation, ballot-box stuffing and tampering with tally sheets, as has been widely reported and documented.  People we met with from different sectors, including two of the presidential candidates, affirmed the nature and extent of the electoral fraud.  Yet the US has pushed for a quick run-off between the ostensible top two vote-getters, which Haitians have successfully resisted with persistent, large scale street demonstrations. 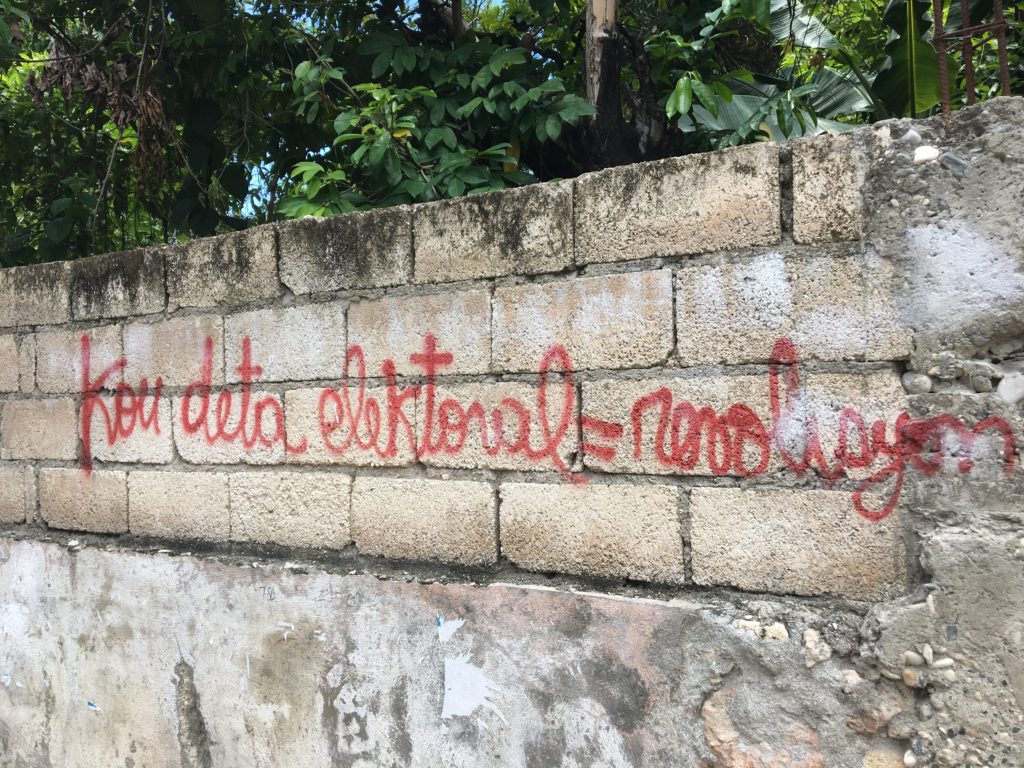 Physical structures can symbolize power or lack thereof.  The Haitian National Palace, seat of government and source of national pride for 200 years, was severely damaged in the 2010 earthquake and has since been leveled.  All we could see was a tall fence surrounding the now-empty site.  On the other hand, shortly after the 2004 coup, the US Embassy was relocated from a modest downtown Port-au-Prince building to a newly constructed gigantic, fortress-like compound outside of town, surrounded on all sides by United Nations “MINUSTAH” military bases.

Our group, consisting of seven US citizens and one Canadian, met with Michael Gayle, Deputy Political Counselor in the US Embassy, to discuss the electoral crisis.   As we underwent rigorous security protocols upon entering the compound—passport check, metal detectors, handbag search, no cameras or cell phones allowed, no wandering around on your own, no going to the restroom unaccompanied—I kept wondering, what is it they’re afraid of?

Our conversation with Mr. Gayle, while cordial and friendly on the surface, revealed the condescending and colonialist nature of the US government’s attitude towards Haiti.  His claim that Haitians have a poor history of participation in elections was refuted by one of our delegation members who had observed the 1995 and 2000 presidential elections in Haiti, both of which had gone smoothly with strong voter turnout and no major problems reported.  He further suggested that “both sides” were to blame for cancellation of local and parliamentary elections between 2011 and 2015, and that there was cheating on “both sides” during the 2015 elections, when in fact outgoing president Martelly and his party were clearly responsible in both cases, with help from well-paid foreign political operatives.

Image of Haitian maroon revolutionary
“The spirit of the Haitian people will never break.”

Mr. Gayle stressed the urgency of having a stable elected government in order to reassure outside investors (no mention of reassuring the citizens that their votes were counted!).  When asked why the US isn’t more concerned with the integrity of the elections than a delay in seating the government, he paused and then denied electoral fraud was widespread or affected the ultimate outcome.  His concluding remark, “When capabilities are so low and challenges are so great, where do you draw the line about how flawless the process has to be?” was indicative of the self-serving US policy of dismissing Haitian people’s intelligence, skills and aspirations.

After the US Embassy visit, our next appointment with one of the 2015 presidential candidates offered a refreshing contrast.   At the office of Dr. Maryse Narcisse of the Fanmi Lavalas party, we were warmly welcomed in an open air and relaxed atmosphere, where supporters from various communities were engaged in lively discussions.  Dr. Narcisse told us how all of the candidates and parties except a few associated with Martelly had come to consensus on heeding the people’s demands and proposing a framework for a verification commission to do an in-depth and transparent evaluation of the 2015 elections.  She said her party is not afraid of the results because people were fed up with the 2010-11 elections and insist on free and fair elections this time. She pointed out that while the current Provisional President has little power, he can appoint the verification commission and take steps quickly to assure a fairly and justly elected government is in place, which could then tackle the broader social and economic issues the country faces.

As a US-based delegation, our message to Mr. Gayle of the US Embassy in person and to the US State Department in a press conference we held in Port-au-Prince was to stop pressuring Haitians to accept a seriously flawed electoral process and respect Haiti’s sovereignty in rectifying the situation.

The day after we left Haiti, on April 28, we were pleased to learn that Provisional President Privert did in fact convene the election verification commission as proposed by the group of parties and candidates, giving it 30 days to complete its investigation.  Haitians will be watchdogging the process intently.

Marilyn Langlois is a member of the Haiti Action Committee and of TRANSCEND USA West Coast.

This article originally appeared on Transcend Media Service (TMS) on 9 May 2016.

Anticopyright: Editorials and articles originated on TMS may be freely reprinted, disseminated, translated and used as background material, provided an acknowledgement and link to the source,TMS: Haiti’s Election Verification Commission: A Step in the Right Direction, is included. Thank you.

Haiti on the precipice as coronavirus and US-imposed leadership take their...