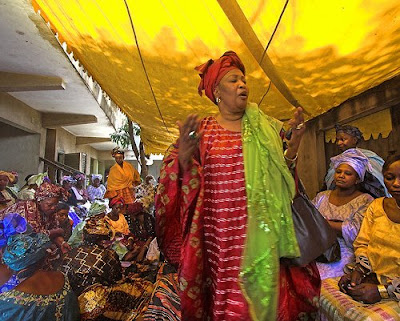 Fanta a griot singing at an engagement party

The griots are above all professionals who represent as a group, a well-defined social caste. Their role is multifaceted: as historians and genealogists, they are the chief repositories of the history of a region, its designated chroniclers. As musicians, their presence was traditionally required at all celebrations and rituals. Although the griot caste is among the lowest in the social hierarchy…griots are nevertheless much admired for their talent, and they can make a great deal of money. Among them, one find the most virtuosic of singers and instrumentalists. Their education and training, exclusively oral, necessitates a lenghty apprenticeship under the direction of a teacher-most often the father, or an uncle. It is necessary to study for many years in order to master the technique of an instrument or to learn all the songs and histories, and master the ensemble work indispensable to the activities of the professional. Some griots are more or less sedentary, and their renown is confined to the limits of their village or territory. (In this case, the griot will also work at another job: fisherman, farmer, etc.) Other griots are itinerants, and their reputation and income can vary considerably. 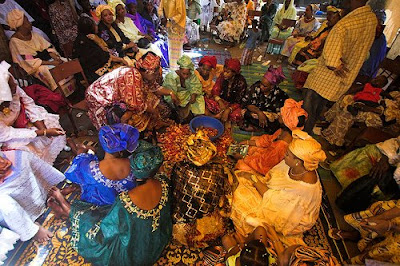 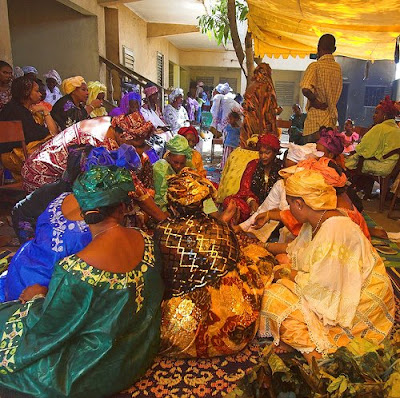 The husband-to-be brings cola beans to the family of the wife-to-be, and then goes off somewhere else. This is apparently always the procedure: the couple to be wedded are never present at the festivities. So also here. The men are somewhere else, and all the women are gathered to distribute the cola nuts. The griots sing pretty words about different people at the party, who then stick money in their hands.

Photo by arriving at the horizon

Griots hail from West African countries – Mali, the Gambia, Guinea, Western Sahara and Senegal, and are present among the Mande peoples (Mandinka, Malinké, Bambara, etc.), Fulɓe (Fula), Hausa, Songhai, Tukulóor, Wolof, Serer, Mossi, Dagomba, Mauritanian Arabs and many other smaller groups.
Griot term is said to derive from the French translation of “guiriot” of the Portuguese word “criado,” which means “servant.” In the local African languages, griots are referred to by a number of names: jeli in northern Mande areas, jali in southern Mande areas, guewel in Wolof, gawlo in Pulaar (Fula), and igiiw (or igawen) in Hassaniyya Arabic. Griots form an endogamous caste, meaning that most of them only marry fellow griots and that those who are not griots do not normally perform the same functions that they perform.
Griots either sing or speak 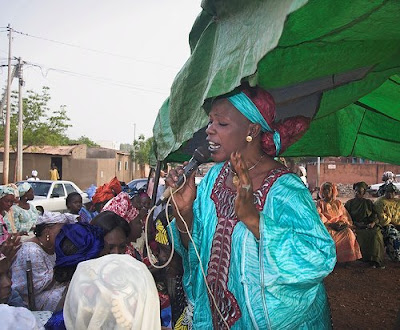 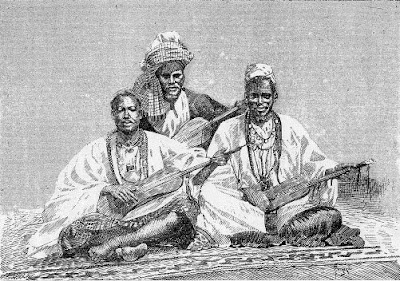 West African aristocrats patronized griots, a group that belongs to an endogamous caste of historians, musicians, praise-singers, and mediators. Their accomplishments include a body of epics, legends, and lyrical songs; sophisticated and virtuosic instrumental and vocal traditions; and detailed oral histories sometimes going back a thousand years. West Africans today know the names of such kings and warriors as Sunjata Keïta, Kelefa Sané, Albouri Ndiaye, and Omar Tall because all of these figures had griots who composed laudatory songs and histories about them that subsequent griots have passed down to us today. As modern political and economic systems replaced the aristocratic systems of pre-colonial days, griots found patronage in the general public and their art became popularized. Thus, whereas the most famous pre-colonial griots were royal heralds, court entertainers, and praise-singers, the most famous griots today are recording artists, television announcers, and stage actors.
Traditionally, griots’ most important functions centered on the arts of speaking. Griots’ supernatural facility with words makes them indispensable at all important social functions. Their nearly unlimited verbal license gives griots not only a unique power to influence and exploit, but also a deep-rooted stigma.
Many Senegalese find the places, values, and personalities of griotism foreign and irrelevant. Griots who have preserved their vocation as performers and artists have consequently adapted their art, emphasizing the art of entertainment above the traditional art of the word. This is not to say that griots have by any means abandoned their verbal function; however, other functions less salient to the traditional identity of griots have begun to rival and often to surpass the importance of words. Griots’ principal occupation now is the art of song, and perhaps the most commonly recognized mark of a griot today is an obsession with money. 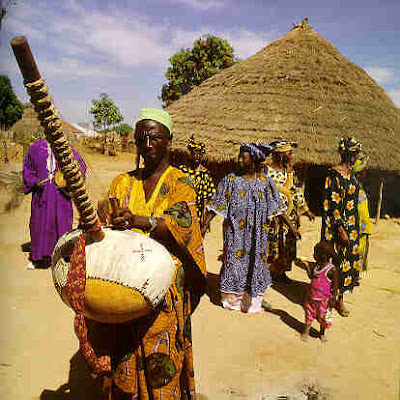 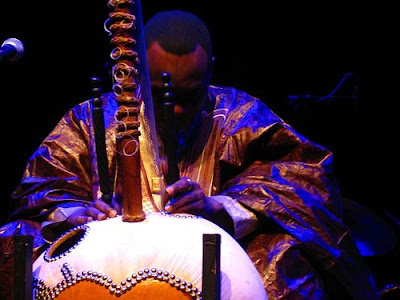 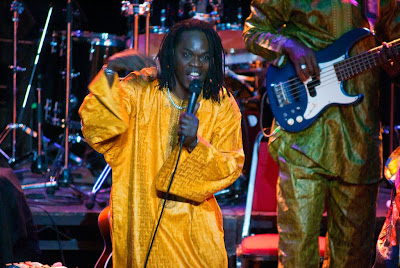 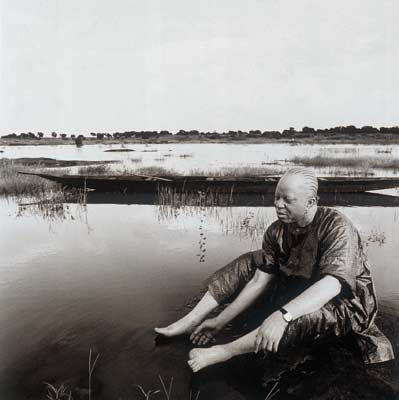 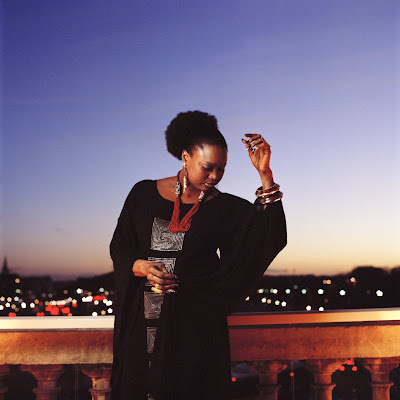 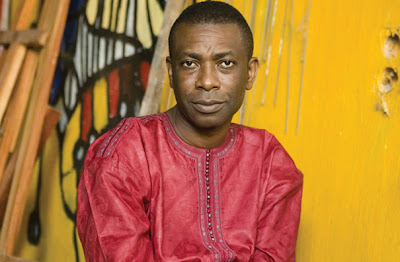 A Griot, Her Mother, and Tiken Jah

Kimpavitapress - March 31, 2018 0
In the Industrial Area of Kampala there used to be a German led record printing press called OPEL Gramophone Record and Battery Factory. Its...

Indigenous women in Kenya rebuild resilience amidst an eco-cultural crisis