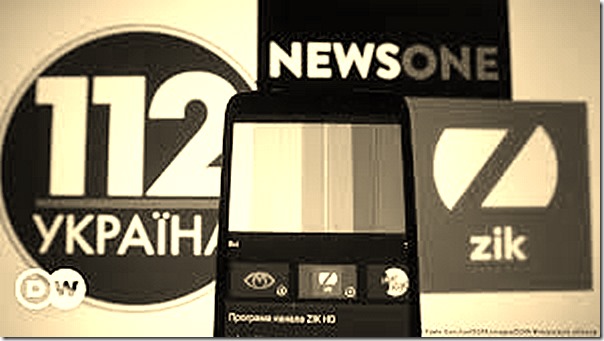 Freedom of speech has become something like the 11th commandment of the Bible and it is interpreted by everyone in their own way, as everybody does with the holy text. Big media “defends” tooth and nail that freedom of speech is inviolable and must be safeguarded at all times. However, like good preachers, they interpret this principle in their own way, not to say as they please.

The current crisis in Ukraine has shown very clearly that freedom of speech is just an entelechy when it comes to political and economic interests. Both sides in the conflict have violated freedom of expression and people’s right to trustworthy information. Some have indeed taken more pains than others, but they have all used censorship and manipulation as a weapon, whose only victim has been world public opinion, which means us, common citizens.

The first attack on the right to information and freedom of expression was the coordinated and intentional silence on the Donbas conflict. The mainstream media made a very limited coverage, sometimes turning into long silences. Since the Minsk II agreements were signed in 2015 and for the next seven years, what was happening in eastern Ukraine was unvisualized at all times, except for some sporadic and occasional notes on Russia’s statements on the matter. It would seem that nobody in the world cared about the consequences of what was happening there, but the reality is that it is impossible to be concerned about something that we are not aware of.

This seven-year silence is one of the reasons why the American and European public is shocked. They simply did not see it coming. On the other hand, it also explains why many people believe this is a war where Russia is the only responsible party. Both of these things are the result of the media’s performance in the conflict since its last crisis burst in 2014 with Euromaidan.

At the beginning of 2022, the media created great expectations about the conflict in Ukraine and repeated everywhere the White House warnings about a possible Russian invasion. The amount of information about this was so overwhelming, and the communication strategy was so well-elaborated that nobody asked why Putin decided to invade Ukraine? Simple explanations, based on Russian ambitions and interests, were enough to satisfy an audience dismayed by the imminence of war in Europe.

The actions of mainstream media succeeded in disconnecting the 2014 crisis from the current one, an opinion that went deep into world public opinion and facilitated the construction of Russia as solely responsible for the current crisis, which is false. While Putin’s government pulled the trigger for a full-fledged invasion, we cannot ignore the fact that the United States and its NATO allies’ actions to militarily encircle Russia and strengthen the anti-Russian sectors in Ukraine are also part of the causes lying beneath the surface.

In this scenario of euphoria and after demonizing Russia, the big interests were ready to kill their next target: freedom of expression.

Along with the massive use of fake news (suspiciously almost all of them favor Ukraine), governments and enterprises unleashed censorship worthy of the best of the best of dictatorships, that of the interests of capital. The signals of the most important Russian media with a presence in the West, namely Russia Today (RT) and Sputnik, were censored in countries such as the United Kingdom, Finland, Germany, Spain, and many others in the European Union. The United States also adopted similar measures. Although, some media self-censored themselves to avoid the duty to report the criteria of the Russians. Such was the case of the Spanish television station RTVE, CNN International, ABC News, BBC, and the Spanish newspaper “El País”.

The Russian media have also been fined thousands of dollars in countries such as Germany (more than US$ 30,000), and in the UK alone, 15 legal proceedings were opened against them for the most absurd reasons, including the dissemination of false news. The latter is ironic since the fake news phenomenon has occurred in the opposite direction. However, beyond the irony of this fact, it seems that the British believe they have a monopoly on the truth. Just like the medieval church, they tell us what we should believe or know.

At the same time, another onslaught against freedom of expression took place in the digital arena. The first to jump into the fray were Meta (owner of Facebook) and YouTube, which blocked Russian media broadcasts first in Ukraine and then throughout the European Union. Facebook went even further and created a special monitoring team to prevent the spread of fake news about the conflict. However, the true objective of this team remains in question as the platform continues to be full of content classified as fake news, several of which have been published from verified profiles.

Meanwhile, Twitter decided to tag journalists and influencers as sources associated with the Russian government if they shared information from Russian sources. According to the company, being labeled as such is an alarm for the rest of the users, who should be aware of possible biased or false information. At the same time, it tells the algorithms to reduce the visibility of the labeled profiles. Similarly, major broadband internet providers, such as Cogent, have announced a break in their services in Russia, which is aimed at limiting the speed of the internet in the country and, consequently, the flow of incoming and outgoing information.

Censorship has spread to other social media such as TikTok and Twitch either to block profiles of Russian news agencies or to ban posts from Russia. In addition, Google Play Store and Apple Store removed RT and Sputnik’s app from their platforms.

Likewise, Russia has blocked Facebook and Twitter and protested censorship against them. The State Duma (Russian Parliament) has also passed very ambiguous laws to counter the effect of fake news on the war. Despite being a legitimate initiative, it poses a risk to freedom of expression due to the ambiguity in its terminology and the subjectivity in defining the concept of fake news.

Similarly, hundreds of people have been arrested in demonstrations that have taken place in the country to reject the war against Ukraine. These measures have been justified by the country’s authorities as “acts of defense,” which is an understandable argument, but they are still violations of freedom of expression.

All this shows that freedom of speech is nothing but a sham, another argument of political discourse to accuse others. Something that the current crisis has irrefutably proved. This is a fake and selectively applied freedom, which will continue to be that way, ever since current wars have two battle arenas, the physical and the informative one. The latter has been the battlefield where the United States and its NATO allies have been most supportive of Ukraine. Without the battle for public opinion, the delivery of arms and supplies as it is today would have been impossible.

Russia may be winning the military battle, but the censorship imposed by the West has made a substantial difference in the unfolding of events. However, the major victim has not been Russia, but us, ordinary citizens whose right to choose sides has been denied to us by the existence of a single narrative. To be informed is not only a duty but a right.

Kimpavitapress - October 9, 2016 0
Under U.S. pressure, the UN refuses to lift an embargo against the tiny nation of Eritrea, while ignoring constant aggressions by its huge neighbour,...

On shared struggles: From Sudan to the gilets jaunes to #MeToo

Do You Know This Haitian Revolution Early Leader & Vodou Priest?...

Belgium to apologise for kidnapping of children from Congo