Human beings are social creatures whose survival depends on cooperation and mutual support.  Only in an atmosphere of perceived scarcity, threats and unresolved conflicts do people divide and demonize “the other”.  The common denominator in divide and conquer scenarios is increasing concentration of wealth and economic control in the hands of a greedy few to the detriment of poor and working families.

To prevent divisions from deepening and leading to violence, we must explore who might be motivated to create such an atmosphere and incite these divisions.  It’s tempting to point fingers at one side or the other, while neglecting to consider who lurks in the background, benefitting from the fighting and enjoying impunity from complicity in the problem.  In other words, let’s remember to watch who’s doing the conquering and not let them off the hook.

During the 2016 US presidential primaries, many commentators referred to Bernie Sanders as a “left-wing populist candidate” and the Republican front-runner as a “right-wing populist candidate”, viewing populism as merely a self-serving tactic to attract votes in two different flavors.  More correctly, we must distinguish between inclusive populism that advocates for the well-being of everyone, and divisive populism that serves a divide and conquer agenda, benefitting the rich and powerful.

Divisive populism, as espoused by the candidate who is now US president, has led to a resurgence of white supremacy and racially motivated violence, translating to big dollars for the weapons and security industries.   The inclusive populism of Sanders, on the other hand, aimed at guaranteeing health care, a living wage and free college education for everyone, is inherently all-serving.

The inclusive populism of Tito in former Yugoslavia was recalled wistfully by many people I encountered in that region on a visit this summer, seeking clues about the country’s division and cui bono, who benefits?  In Bosnia–home to Muslims, Serbs, Croats and other minorities–our local guide, an open-hearted humanist who always viewed himself as Yugoslav first, praised the Tito era policy of equal rights, equal treatment and equal value for all people.  Though not always implemented perfectly, this policy set the tone for enabling peaceful co-existence in a very multicultural society with a previous history of periodic ethnic clashes.

Tito’s Yugoslavia was a happy medium between the Soviet bloc’s harsh restrictions and the West’s free-wheeling capitalism with some winners and many losers.  Its socialist system further discouraged divisiveness by prioritizing housing, education, healthcare, jobs, and cultural enrichment for all, while allowing freedom of travel and openness to political dialog and economic partnerships with the West. 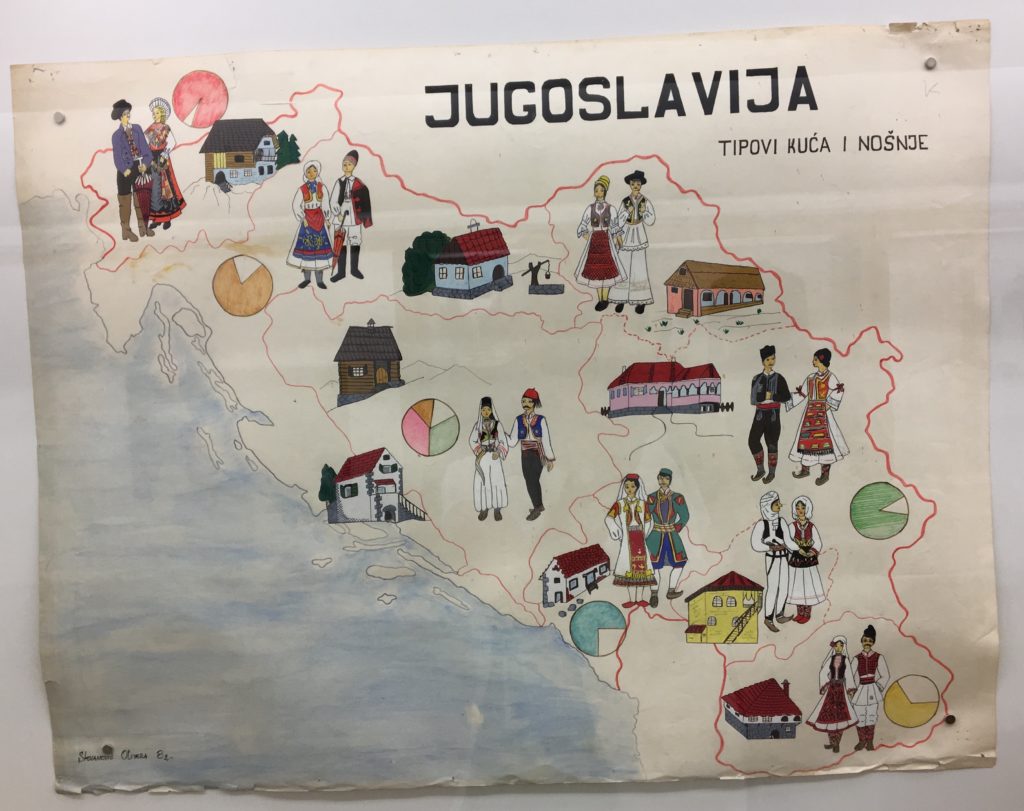 Child’s gift to Tito on display at Museum of Yugoslav History in Belgrade.

So what happened in the 1990s?  How did it all fall apart?  Several independent journalists and scholars provide insightful analyses, strikingly different from the often repeated official Western narrative about how ethnic differences spontaneously ignited into violent warfare 25 years ago.[i]

The weakening of the Yugoslav federation may have been inevitable after the charismatic leader’s death in 1980, followed by a cumbersome shared leadership formula.  However, much of the bloodshed, suffering and destruction could have been avoided, had Western powers not intentionally stoked the flames of nationalism and divisive populism.  Increasing demands for IMF loan repayments created scarcity, followed by premature and illegal Western recognition of secessionist states without allowing Yugoslav peoples sufficient time and space to work through their internal conflicts over federalism, self-determination, and borders.  While Maastricht in 1992 sought to unify European nations, the US and Germany aimed at tearing Yugoslavia apart:  supporting certain groups of extreme nationalists and demonizing only one, enabling abuses and inciting retaliation, and culminating in massive extra-legal US/NATO bombing.  As in all warfare situations, the weapons industry thrived.

Diana Johnstone surmised why the US had reason to seek Yugoslavia’s demise:

…Yugoslavia became an enemy both as a discarded asset and as a potential alternative.  When the Soviet Bloc collapsed, non-aligned Yugoslavia lost its value to the West as a strategic asset.  As a nominally socialist country with considerable Third World relationships thanks to its leading role in the Non-Aligned Movement, Yugoslavia could be seen as a potential alternative model.  If the country held together, it might stand in the way of Western plans for the region…”[ii]

Now, 25 years later, I saw how many of those “Western plans” have come to fruition.  In Slovenia, Croatia and Bosnia huge modern shopping malls housing international chain stores and name brands have taken root on the fringes of urban centers, luring local residents to spend their minimal salaries, with significant profits leaving the country and into the pockets of wealthy shareholders.  Our Croatian guide noted that despite the prosperous looking tourist destinations along the Dalmatian coast there is still much unemployment and housing insecurity.

Belgrade’s legendary “Film City”, memorialized in the award wining documentary “Cinema Komunisto”, was home to Yugoslav state-owned Avala Film, locus for the thriving movie industry fueled by Tito’s love of cinema, and a major asset to the Yugoslav economy.  After the violent break-up of Yugoslavia in the 1990’s, Western powers made sure subsequent Serbian leaders toed the line of neoliberal economics, including rampant privatization at spot prices.  Avala Film studios, comprising 73 hectares of land, as well as the rights to the entire catalogue of films produced (around 200 feature films and 400 documentaries) was valued at 105 million euros by the Serbian Agency for Privatization in 2008, yet in 2015 was sold to private investors for only 8.1 million euros.[iii]

Many Belgrade residents are protesting displacement and gentrification being ushered in by West-friendly elected officials who overnight evicted hundreds from their older housing along the Sava River, making way for an internationally financed upscale private development called “Belgrade Waterfront”, which former residents of the neighborhood will be unable to afford. 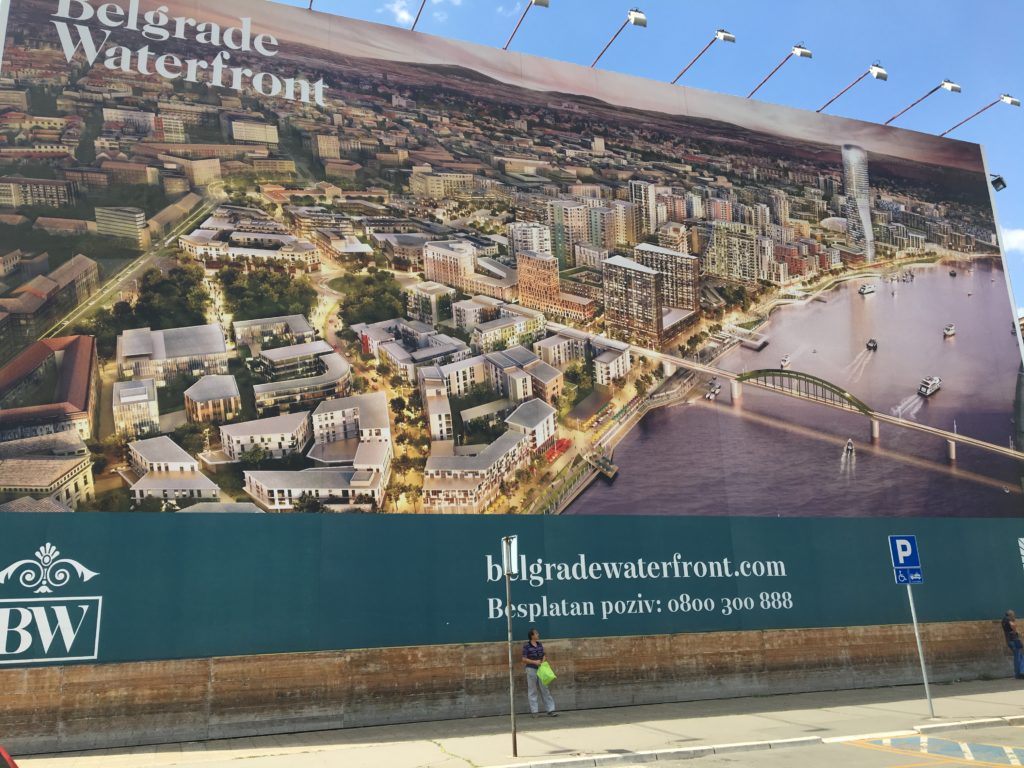 Wherever there are powerful economic interests the military is never far behind to secure them.  In Kosovo, with its extensive mineral resources, turned NATO protectorate after 1999 and ostensibly independent since 2008, the US has established a major military base, Camp Bondsteel, headquarters for ongoing NATO operations.  Expressions of anti-Serb sentiment are still visible in Kosovo, historically the cradle of Serbian culture but now practically devoid of Serbian people.  Ironically, after massively bombing Yugoslav/Serbian facilities and institutions in 1999, NATO military units now guard the 14th century Serbian Orthodox Decani Monestary, a UNESCO heritage site, from on-going threats of Albanian nationalist vandalism. 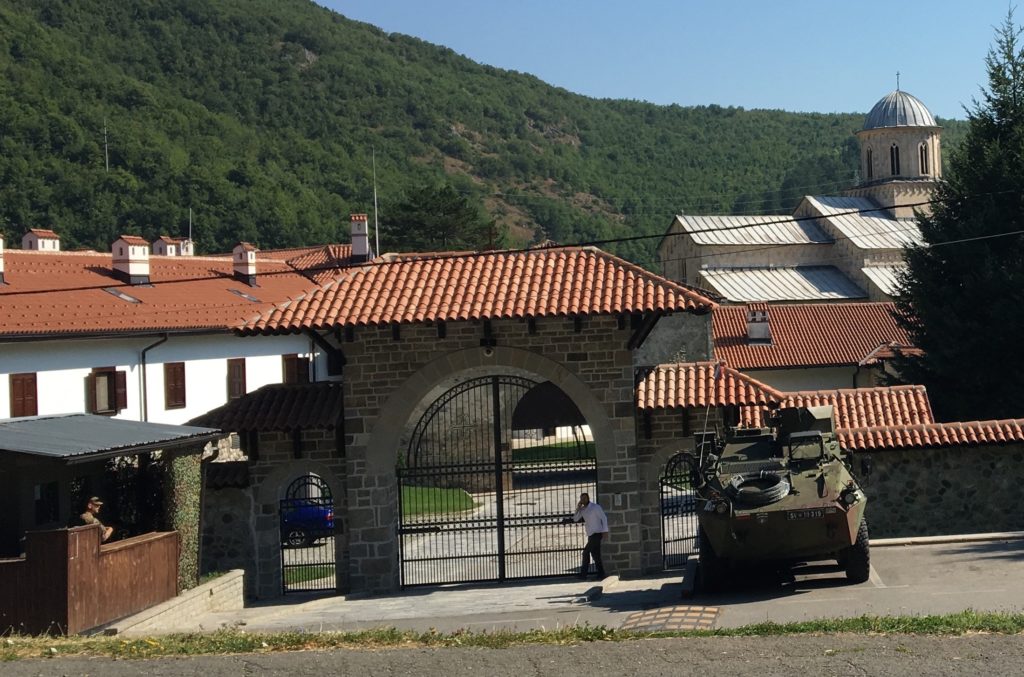 Montenegro, whose population historically shares a close affinity to Serbian culture, remained part of truncated Yugoslavia after the wars.  The big powers, however, succeeded in driving a wedge between Montenegro and Serbia.   The former declared independence in 2006, with US blessings and the assurance of US-friendly leaders being elected.  To guarantee Montenegro’s loyalty to the West and avert Russian influence, the US welcomed this small Balkan state with an army of only 2,000 into NATO in June 2017, with US Vice-President Pence stopping by in August to seal the deal.  Kosovo and Montenegro are the only non-EU states allowed to unilaterally adopt the euro, likely easing international investment and profiteering.

What gave me hope while traveling in countries of the former Yugoslavia was how often I encountered and got to know people who reject nationalist divisions and who embody the basic human impulses of cooperation and mutual support, regardless of ethnic identity.  In spite of bad behavior all around us, that which is deeply human keeps surfacing and cannot be stamped out completely. 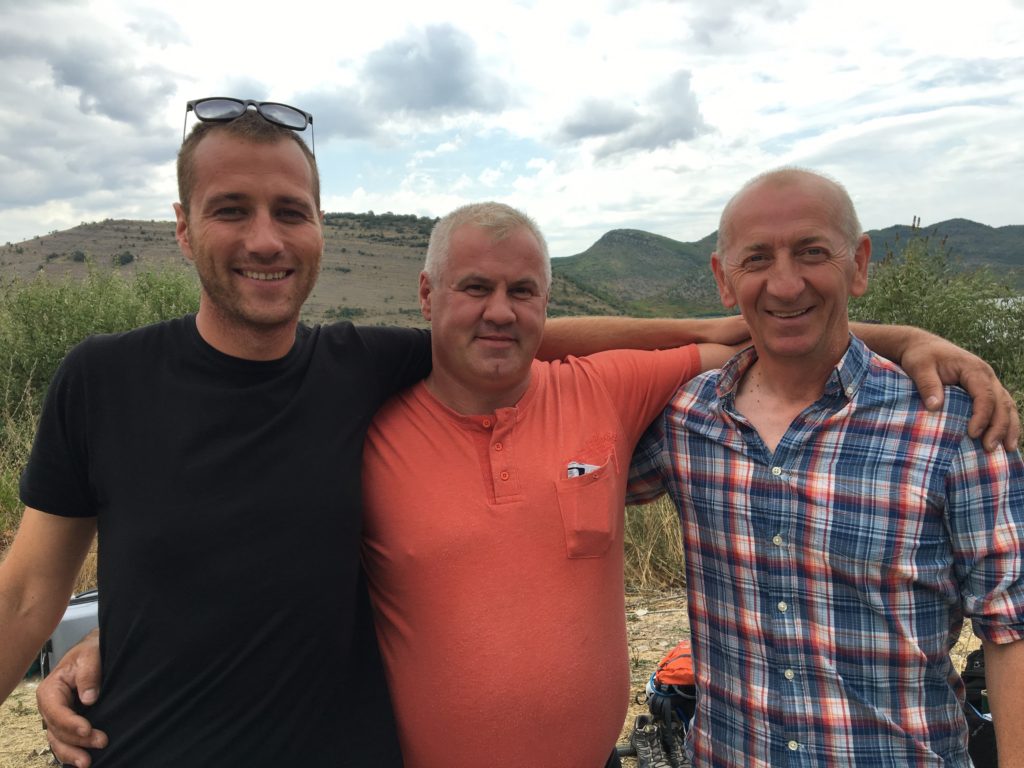 If we can keep tapping into that deeper humanity and chip away at the incentives to divide and conquer, surely we humans can join forces to ensure a decent life for all people, including those who presently are poor or rich and everyone in between.   More on reviving inclusive populism to achieve this end in another editorial in the near future, so stay tuned.

Michael Parenti, To Kill a Nation:  The Attack on Yugoslavia (Verso, New York 2000)

Pastoralism – A challenge to Africa’s security