An Aug. 14 earthquake completely devastated southwestern Haiti, the country’s breadbasket. At least 2,200 people were killed, and tens of thousands of homes destroyed, along with roads, bridges, schools, churches and crop fields. A few days later Tropical Depression Grace dropped 5 to 15 inches of rain on the area in 24 hours. 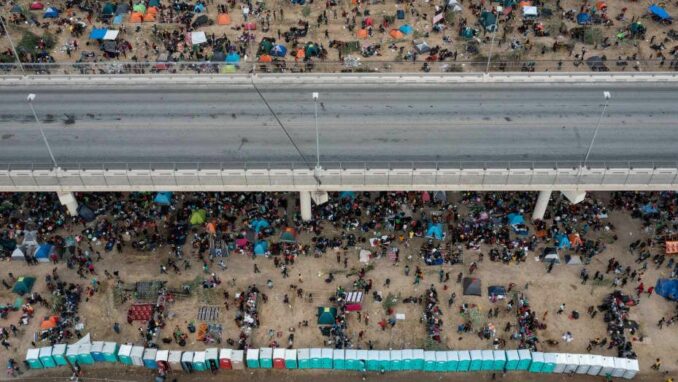 Because of the July assassination of Haiti’s president Jovenel Moïse and a general climate of unrest and destablizing violence, there has been no effective centralized response to the earthquake and devastating weather.

This situation grew even more difficult when the current acting prime minister, Ariel Henry, was charged with complicity in the assassination.

The political and economic situation in Haiti is so dire that on Sept. 10, the Department of Homeland Security was forced to extend Temporary Protected Status for Haitians who resided in the U.S. prior to May 21.

Haitians come to apply for asylum

Haitians from across Latin America looking for asylum in the U.S. have gathered under the International Bridge at Del Rio, 150 miles west of San Antonio. This encampment began in August with a few hundred people, families and single adults.

As of Sept. 18, the gathering had 14,500 people according to an estimate by Rep. August Pfluger (R-Texas), who gave the figure to Yahoo News while at the scene. Pfluger noted there had been 12,000 people present Sept. 17, with hundreds  arriving each hour.

Homeland Security has quickly deported 86 Haitians from this gathering of thousands of migrants and is planning to deport more on three to five flights to Port-au-Prince, Haiti’s capital, during the week of Sept. 19.

Many of the Haitian families at the U.S. border have complicated issues of nationality. Some have worked in Brazil or Chile for years after fleeing the catastrophic 2010 earthquake in Haiti and its aftermath. The children of these families, born in Brazil or Chile, are not Haitian citizens, and Haiti is not obliged to accept them.

This gathering of Haitians at the Mexican border is a protest, a demonstration revealing that the immigration policies of the Biden administration are just as racist and exclusionary as Trump’s. These policies may not be as crudely expressed or with as much overt racism, but they have much the same impact.

Nicole Phillips, legal director of the Haitian Bridge Alliance, a coalition of Haitian nonprofits, told the Associated Press Sept. 18: “It really is a humanitarian crisis. There needs to be a lot of help there now.” The Alliance advocates that the U.S. government allow these migrants to apply for asylum.

The U.S., Canadian, and Francophone press have alleged, sometimes explicitly and sometimes not, that “some group” must be “behind” this protest by Haitians coming simultaneously from all over Latin America.

But historically, the Haitian people have known how to unite in struggle, from the uprising inspired by Dutty Boukman against the French slave masters in 1791 and the subsequent successful war for liberation from slavery, the struggles against the U.S. occupation from 1916 to 1934, the protests against Jean-Claude “Baby Doc” Duvalier in 1986 that forced him from office, the massive protests against anti-Haitian U.S. AIDS policies in 1990 and more.

In this age of social media, Haitian workers in Latin America maintain contact with their relatives and friends both in Haiti, North America (particularly Montreal, Boston, New York and Miami) and France.

The U.S. Coast Guard has blocked access to the U.S. from Haiti by sea. A general agreement by the people on the easiest way of getting into the U.S. was over its border with Mexico. Del Rio has a bridge that offers access.

And so the people let each other know, and they came.

Too Fast to Be a Woman

Kimpavitapress - March 26, 2020 0
When South African track star Caster Semenya won a silver medal at the 2012 Olympic Games, critics claimed “she was cheating and had no...