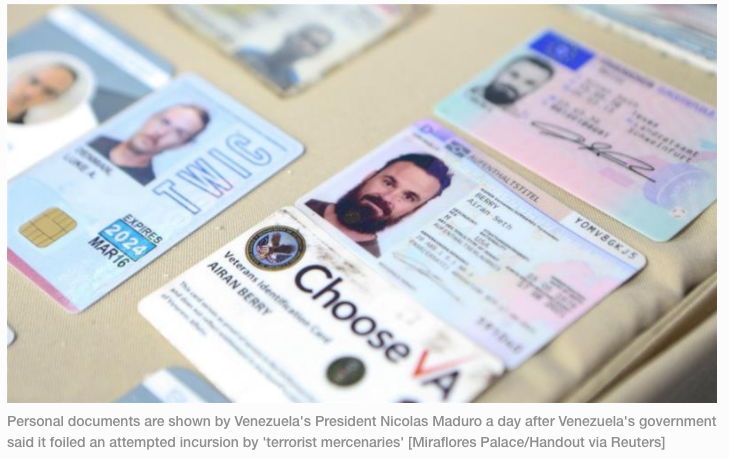 In the early morning hours of Sunday, May 3, speedboats left the Colombian coastlines and headed toward Venezuela. These boats had no authorization to cross the maritime border. They landed on the Venezuelan coastline at La Guaira. This was clearly a hostile action, since the boats carried heavy weaponry, including assault rifles and ammunition; the people on the boats possessed satellite phones as well as uniforms and helmets with the flag of the United States of America.

The incursion was intercepted by Venezuelan authorities, who fought them off; eight of the belligerents were killed, while two were intercepted. One of those who was arrested says that he is an agent of the U.S. government’s Drug Enforcement Agency (DEA). The DEA has not responded to calls for confirmation.

Néstor Reverol, the minister of internal affairs of Venezuela, told Venezuelan television stations hours after the thwarted incursion that the government received information about the attack from sources in Colombia and by its own regular patrols of the Venezuelan coastline. “We cannot take any of their threats lightly,” said senior Venezuelan politician Diosdado Cabello. “What happened today,” he said, “is an example of the desperation” of the United States and its allies.

The United States government has been entirely candid about its goal to overthrow the government in Venezuela led by Nicolás Maduro and to reverse the Bolivarian Revolution. In August 2017, U.S. President Donald Trump spoke openly about the “military option” at the same time as the United States, Canada, Colombia, and a list of other countries governed by the far-right and subordinated to Washington formed the Lima Group. The Lima Group tried to maintain a liberal patina around their objective, stating in their declaration that they wished to “contribute to the restoration of democracy in [Venezuela] through a peaceful and negotiated settlement.” Trump ripped aside the fig leaf of this kind of liberal language; he interpreted the phrase “restoration of democracy” quite rightly as a military coup or an armed intervention to overthrow the government.

In January 2019, the United States government deepened its hybrid war with a clever diplomatic maneuver. It declared that Juan Guaidó, an insignificant politician, was the president of Venezuela and turned over substantial Venezuelan assets outside the country to him. An attempted uprising in Venezuela failed to materialize, and Guaidó found himself with more friends in Washington, D.C., and amongst Colombia’s oligarchy than at home in Venezuela. This failed attempt to overthrow the Venezuelan government did not deter the United States. In fact, the failure deepened U.S. conspiracies in the region.

In May 2019, Senator Lindsey Graham took to the pages of the Wall Street Journal to make the case that the “U.S. must be willing to intervene in Venezuela the way we did in Grenada.” In 1983, the U.S. marines landed in Grenada to overthrow the legitimate government and to uproot the New Jewel Movement. The United States, Senator Graham wrote, “should move military assets to the region.” The United States attempted to create a phalanx of allies in the Brazilian and Colombian military to prepare for an invasion of Venezuela. Fortunately, at the Lima Group meeting in February 2019, Brazil’s vice president Hamilton Mourão told the press that Brazil would not allow the U.S. to use its territory for a military intervention into Venezuela. The plans of a full-scale invasion had to be put on hold.

As COVID-19 moved toward South America, the U.S. government increased pressure on the Venezuelan government. In February 2020, at the Munich Security Conference, U.S. Secretary of State Mike Pompeo said that the U.S. seeks to “oust Maduro.” In March, the U.S. tightened sanctions against Venezuela, and then the U.S. Treasury Department put pressure on the International Monetary Fund not to allow Venezuela access to emergency finances to tackle the global pandemic. None of this worked. The Venezuelan government mobilized the people to break the chain of infection with international assistance from China, Cuba, and Russia as well as the World Health Organization.

At this point, the U.S. government shifted its focus. It suggested that President Maduro and his senior leadership are involved in narco-trafficking. No evidence was offered for this hallucinatory claim, although there is substantial evidence of the culpability of senior Colombian politicians in the drug trade. Trump authorized a naval detachment to sit off the coast of Venezuela, threaten its government, and intimidate its population. On April 30, to increase pressure on Venezuela, the Trump administration activated parts of the Selected Reserve forces to assist the U.S. armed forces in a mission named “Enhanced Department of Defense Counternarcotic Operation in the Western Hemisphere.” All signs point to mischief by the U.S. and its Colombian allies against the Venezuelan people.

Plots surround Venezuela, the plotters a cast of characters from the seediest quarters of the military and the drug world as well as of U.S. intelligence and Colombian paramilitaries. The plot for a small invasion in 2019 that unraveled is now well-documented by Joshua Goodman of the Associated Press. That plot was led by Jordan Goudreau, who served in the U.S. Army as a medic in Iraq and Afghanistan and then became a private security contractor; he worked with Cliver Alcalá, a former Venezuelan military officer, who brought together a few hundred Venezuelan military deserters to conduct the raid. Alcalá is now in prison in the United States for his involvement in the drug trade. Goudreau and Alcalá were backed by Trump’s bodyguard Keith Schiller and Roen Kraft of Kraft Foods. The entire operation sniffs of a madcap CIA adventure, akin to the 1961 CIA failed invasion of Cuba at Playa Girón.

It is likely that the more recent invasion in May 2020 emerged out of the military deserter camp set up by Alcalá in Colombia. One of the men involved in the raid was Captain Robert Levid Colina, also known as Pantera. Colina had been involved in the attempted coup on behalf of Juan Guaidó on April 30, 2019, and is a close associate of Alcalá’s.

Vladimir Padrino López, the minister of defense of Venezuela, said that the government and the people had defeated this attack and would remain vigilant against other such plots. One of the characteristic features of the Bolivarian process has been the mobilization of the population to defend itself; “We declare ourselves in rebellion,” Padrino said, adding that Venezuela is now under a state of “permanent vigilance.”

Despite the global pandemic, the old playbook of the CIA and the Trump administration with their dirty coups remains operational. As at Playa Girón in 1961, the Venezuelan people defeated this plot at La Guaira in 2020.

Vijay Prashad is an Indian historian, editor and journalist. He is a writing fellow and chief correspondent at Globetrotter, a project of the Independent Media Institute. He is the chief editor of LeftWord Books and the director of Tricontinental: Institute for Social Research. He has written more than twenty books, including The Darker Nations: A People’s History of the Third World (The New Press, 2007), The Poorer Nations: A Possible History of the Global South (Verso, 2013), The Death of the Nation and the Future of the Arab Revolution (University of California Press, 2016) and Red Star Over the Third World (LeftWord, 2017).

Paola Estrada is in the Secretariat of the International Peoples Assembly and is a member of the Brazilian chapter of ALBA Movements (Continental Coordination of Social Movements toward the Bolivarian Alliance for the Peoples of Our America).

Ana Maldonado is in the Frente Francisco de Miranda (Venezuela).

Zoe PC is a journalist with Peoples Dispatch and reports on people’s movements in Latin America.

Kimpavitapress - June 21, 2014 0
by John Scales Avery – TRANSCEND Media ServiceLoss of BiodiversityAll of us know that the relentless growth of human population, agriculture and industry...

The Silence of the International Community on Western Sahara