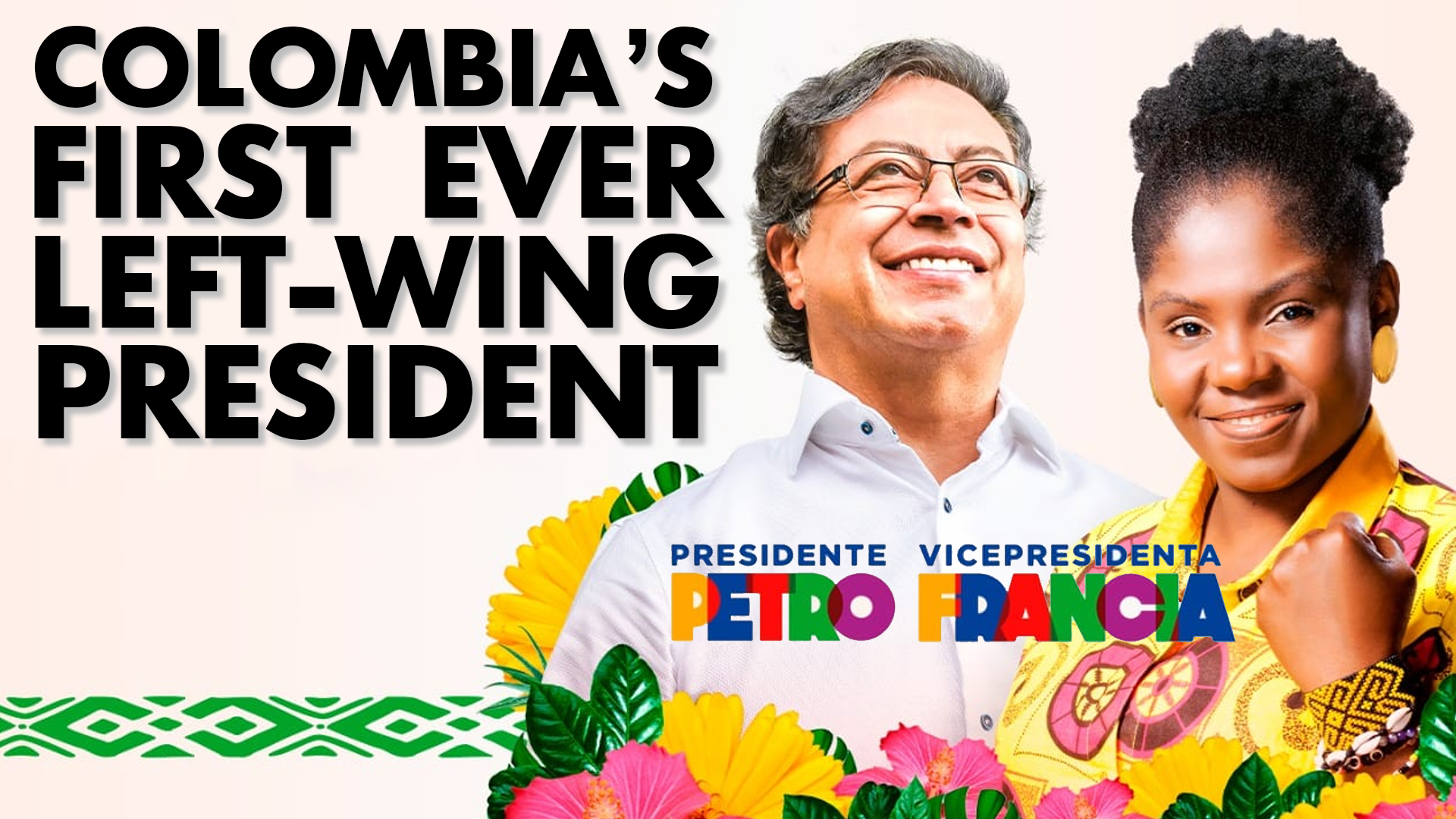 It was, said Francia Márquez Mina, a victory for “the nobodies”. Speaking in Bogota on June 19 after the results of the Colombian presidential election were announced, the newly elected vice-president struck a jubilant note after becoming the first black woman to be elected to the office – on a ticket with former guerrilla fighter Gustavo Petro, the country’s first left-wing president.

Petro and Márquez beat millionaire businessman Rodolfo Hernández, taking 50.5% of the votes. Their platform largely focused on economic and environmental matters, along with a pledge to tax the rich, combat income inequality, reform healthcare and pension systems, promote peace and tackle corruption.

But first they need to bring an end to what Márquez calls the “politics of death”, which has a long history in Colombia. In 2016, a peace deal was signed with the Revolutionary Armed Forces of Colombia (Farc), bringing to an end 60 years of armed conflict with this guerrilla faction. But violence has not ceased, and since 2016, over 1,200 human rights activists have been killed – 89 in 2022 – and 21 former Farc fighters murdered this year so far.

Colombians have voted against decades of dispossession and violence. A number of firsts have been achieved with this election result. It is the first time in Colombian history that leftist candidates have made it alive to the final round of an election – notwithstanding constant death threats during the campaign. It is also the first time that an ex-guerrilla has been elected to the top job, and that a black woman, victim of the armed conflict, will occupy the vice-presidency.

Petro, 62, was a fighter with the M-19 guerrilla group, a leftist armed guerrilla faction, mostly urban, that operated from 1974 until disarmament in 1990. After the 1990 peace process, M-19 played a key role  in the constitutional reform of 1991. Since then, Petro has been constantly involved in mainstream Colombian politics: he has served as mayor of Bogotá and was a senator until the election.

Márquez, 40, comes from the war-torn department of Cauca in Colombia. She became an activist at the age of 13, and a mother at the age of 16. In 2018, she won the Goldman environmental prize for mobilising women to halt illegal mining in her territory. As she told a rally during the election campaign: “I have not asked to be in politics. But politics messed with me and now, we are messing with her.”

Read more: Inside a reintegration camp for Colombia’s ex-guerrilla fighters: ‘Words of reconciliation are our only weapons now’

The alliance of Petro and Márquez was timely, refreshing and highly strategic. Bogotá-based journalist Camila Osorio has identified four key long-term factors that influenced this shift in Colombian politics. Importantly, the revised constitution in 1991 included a requirement for diversity in Colombian politics. This has led to a wider array of voices and opinions in the public sphere. Meanwhile, the 2016 peace agreement changed the narrative about the left and its association with the guerrillas. This then made way for the widespread protests of 2019 and 2021 which generated mass support for a wider and more inclusive political conversation.

The success of Petro and Márquez is a legacy of the nation-wide mobilisations of the left over decades , which has included constant activism from grassroots NGOs, feminist and antiracist collectives, underground student associations, guerrilla groups and the Communist Party, which was forced to go clandestine because of political persecution.

Vivir sabroso or living with dignity

However, it was, above all, women, Afro-Colombians, Indigenous people and the dispossessed that guaranteed the election of Petro and Márquez. Petro’s campaign for the second round has been able to mobilise strategic cities such as Cali and Bogotá that were key to the 2019 and 2021 social protests. The two leaders were also very successful at getting the vote out, combating apathy and abstention.

It was Márquez’s longstanding activism that was key to rallying voters. Her ability to mobilise the Colombians living abroad, was an important factor. But years of experience as a black activist, a feminist and a representative of victims of the armed conflict meant Márquez was able to represent herself as the embodiment of the grassroots struggle for change in Colombia.

Reclaiming publicly Afro-Colombian outfits and openly advocating for intersectional feminism, Márquez’s main campaign slogan was vivir sabroso, which translates as “to live with flavour”. It is an Afro-Colombian conception of “living without fear; it refers to living in dignity; it refers to living a life with rights guaranteed”, according to Márquez. Petro, meanwhile, called for a “politics of love” in his victory speech – which he defined as “a politics of understanding, a politics of dialogue, of understanding one another”.

This positive, inclusive language from Petro and Márquez stands in stark contrast to Colombia’s traditional political discourse, which has tended to focus on the needs of political and social elites and has largely ignored the more marginalised sectors of society. Their campaign rhetoric was geared towards prioritising the needs of all of Colombia after decades of armed violence and inequality.

They will face a raft of challenges – principal among which are the inequalities still rampant in Colombia as well as continuing political violence. The cultivation of coca has been on the rise again since 2018, corruption remains entrenched, as does longstanding structural oppression, such as gender-based violence, class divisions and racism.

Trying to achieve this level of social and economic reform will be extremely difficult. As their election victory suggests, the country remains deeply divided and there are significant interests lined up in opposition. The pair have received – and continue to receive – regular death threats. But their ability to mobilise a broad array of social movements and mass-based collectives will certainly give them a powerful life force to confront the next four years.

The State of the World–By Journalism

Kimpavitapress - September 19, 2016 0
We want journalists to do that, give us the state of the world, by from one “trouble spot”–arenas of past-present-future violence–to the other. Not...