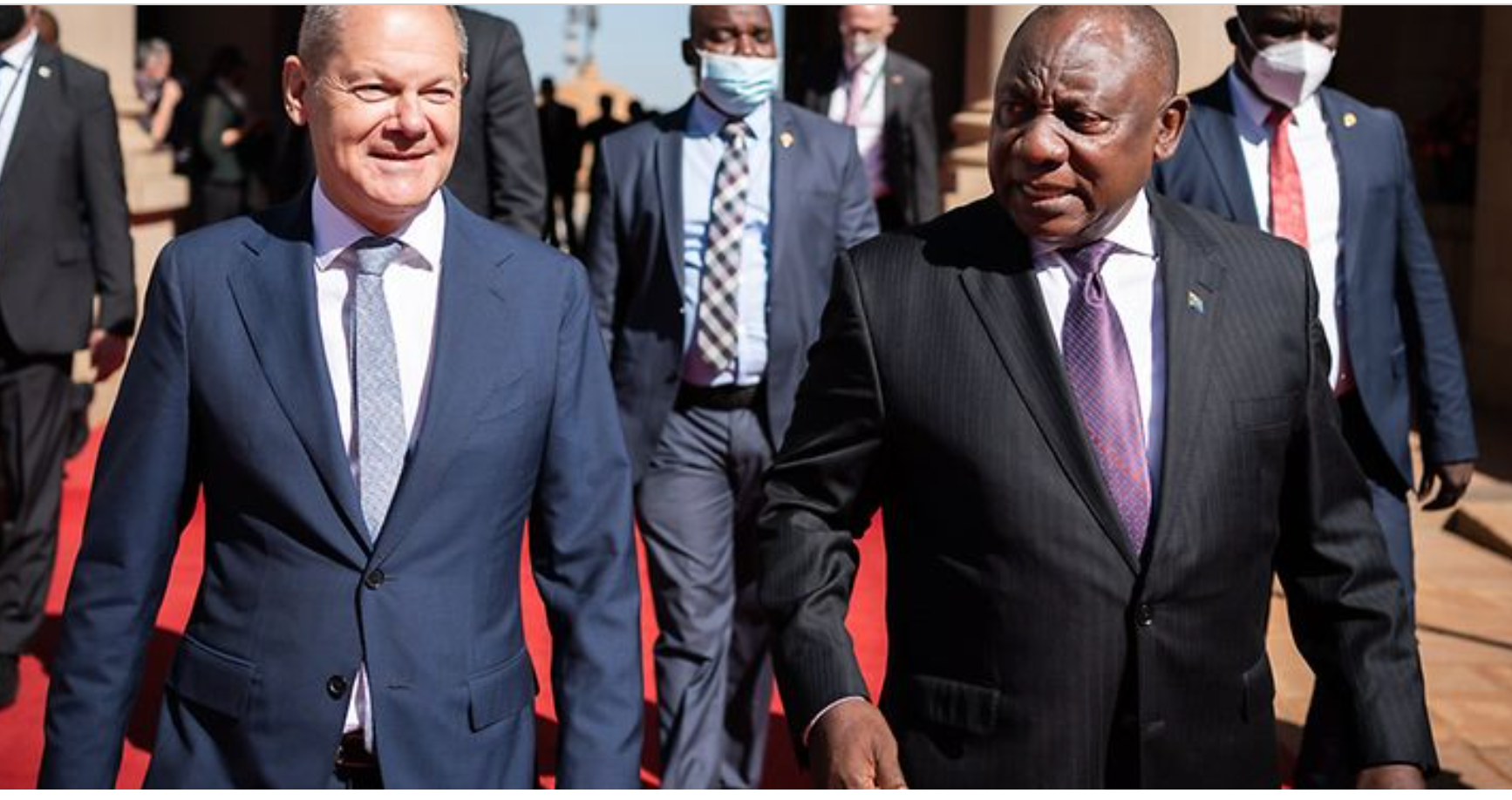 It was a victory for African climate campaigners and their allies in Europe and the United States: a group of powerful countries and institutions including the U.S., Canada and the European Investment Bank announced at last year’s COP26 climate summit in Glasgow, Scotland, that they would end decades of support for oil and gas projects in Africa by the end of 2022. Coming on the heels of a World Bank commitment to start phasing out support for fossil fuels, it looked like a potential death knell for plans to exploit vast quantities of natural gas in Senegal, Mozambique and Nigeria.

And then Russia invaded Ukraine.

In the span of less than a year, gas projects in Africa have come back in style, as European countries scramble to make up for energy shortfalls caused by their standoff with Russia. In late May, for example, German Chancellor Olaf Scholz traveled to Senegal for talks with President Macky Sall over his interest in securing a steady supply of gas from the country’s BP-backed offshore fields. And on Aug. 16, Reuters reported that the EU plans to significantly ramp up security assistance for Mozambique’s troubled Cabo Delgado gas project, which in recent years has been the site of a deadly Islamist insurgency and at one point not long ago was thought to be on life support.

To some African governments, the turnaround is welcome, representing a needed course correction away from climate restrictions that threatened to block their plans to use gas reserves for economic development and boosting energy access for the poor. In a speech at Glasgow last year, Nigerian President Muhammadu Buhari criticized the COP26 announcement, and earlier this year in an op-ed for The Economist his vice president, Yemi Osinbajo, wrote that Africa “cannot accept regressive climate policy as another injustice.”

Nigeria has the continent’s largest proven natural gas reserves, followed by Algeria, Senegal, Mozambique and Egypt. All are advocates for the use of natural gas as a “transition fuel,” which their leaders say will facilitate economic development and help smooth the way for investment into renewables like solar, wind and hydropower.

The needs are clear: access to energy in Africa is far lower than in other regions. More than 600 million of the continent’s 1.3 billion people live without electricity, and despite having only one-tenth the overall population, in 2019 Japan alone consumed more power than all African countries combined did.

But as their presidents ink deals behind closed doors, civil society organizations on the continent are pushing back, most recently at the African Union, where an “African Common Position on Energy Access and Transition” calling for natural gas to be part of Africa’s energy strategy was adopted by the AU’s Executive Council. In an open letter, a coalition of advocacy groups said the position was “dangerous and short-sighted.”

“It makes zero sense to pursue new oil and gas extraction, which will make the climate crisis worse and make achieving climate goals impossible,” said Thandile Chinyavanhu, a climate and energy campaigner with Greenpeace Africa. “The future is renewable, and African countries have the opportunity to lead the world into a new future powered by renewable energy, leaving dirty fossil fuels in the past and in the ground.”

A detailed memo accompanying the letter criticized efforts to expand gas production, saying that additional fossil fuel extraction risked worsening the impacts of climate change in Africa and that profits were likely to again be captured primarily by foreign investors. The memo cited the continent’s decades-long track record of failing to develop through oil and gas extraction, describing it as “enabling small powerful elites to extract rents and maintain economic and political control, while their populations lack access to energy, food and other essential services and remain impoverished.”

“We’ve seen this in Nigeria and African countries with fossil fuel projects,” said Lorraine Chiponda, coordinator of the Africa Coal Network, one of the letter’s signatories. “You can see the poverty that even the communities that live in the same areas are suffering from, so it still doesn’t make economic sense.”

The letter’s authors criticized the idea that gas could be a bridge to a renewable energy grid. It was more likely, they wrote, that infrastructure like pipelines and gas-fired power plants would suck finance and attention away from green energy.

Some supporters of gas projects in Africa acknowledge the poor track record of natural resource extraction on the continent. In Mozambique, for example, the discovery of large offshore gas reserves was followed almost immediately by a massive corruption scandal that implicated senior officials as well as European bankers.

But analysts like Imad Ahmed, an energy and climate adviser at the Tony Blair Institute for Global Change, say that, with the right approach, those prior scandals could inform stronger policies that ensure foreign investors pay their fair share and avoid damaging the environment.

“By remaining financiers of gas development, OECD nations can ensure that these good governance structures are embedded into contractual obligations,” Ahmed told Mongabay.

Supporters of gas extraction point out that African countries are among the lowest per-capita carbon emitters on the planet, and that expecting them to forgo the use of their natural resources to clean up a mess made largely by former colonial powers is inherently hypocritical.

“The prosperity we experience in Europe is on the back of historic emissions. You can’t pretend that it isn’t,” Ahmed said.

Environmental advocates agree, but they say that the appropriate restitution would be for wealthier countries to provide the support and finance for the transition to renewables — as they have promised to do in the past — rather than doubling down on their history of exploiting the continent’s resources for their own gain.

“Even before the climate crisis, many communities and civil society groups in Africa and around the world were fighting fossil fuel exploration due to its impacts on people’s livelihoods and the increased poverty, human rights violations, land grabbing, and corruption it brings,” said Anabela Lemos, founder of Mozambique’s Justiça Ambiental.

Last year, Shell agreed to pay more than $100 million in damages for spilling vast quantities of oil in the Niger Delta during the 1970s.

Whether or not wealthy countries owe African countries compensation for climate change is likely to be a contentious issue at November’s COP27 climate summit, which will be held in Egypt. The G7 group of richest countries managed to keep the issue of “loss and damage” off their agenda at initial talks in Germany held in June, but most observers expect it to take center stage at COP27.

For many influential heads of state and business leaders in Africa, the reluctance of rich countries to provide adequate climate funding to their less well-off counterparts is itself an argument in favor of exploiting the continent’s gas reserves.

“Denying Africa’s right to develop and use its own gas is morally unacceptable,” said the Sudanese-British billionaire Mo Ibrahim earlier this year.

Despite their relative lack of resources and power, though, African environmentalists aren’t going down without a fight. In the wake of the controversy over the AU’s proposed pro-gas stance, the lead negotiators set to represent the continent at COP27 said they would not adopt it as their official position. It was a victory for the anti-gas coalition, but advocates say if Europe stays on its current course, it could usher in a new era of fossil fuel extraction in Africa — and make a green transition that much harder.

“For now the decision has been rejected, but it doesn’t mean that individual governments in Africa aren’t signing deals with governments in Europe,” Chiponda said. “So we have to continue pushing back on that.”

Kimpavitapress - April 27, 2021 0
The TRANSCEND Peace Development Environment Network started with geopolitical macro and mega conflicts; many well known and dramatic.  But conflicts in daily life, at...

Connecting the dot: Congo and World War II; one of the...

10 things to know about nonviolent struggle Rivera by Sun