The novelist on how coronavirus threatens India — and what the country, and the world, should do next.

3 Apr 2020 – Who can use the term “gone viral” now without shuddering a little? Who can look at anything any more — a door handle, a cardboard carton, a bag of vegetables — without imagining it swarming with those unseeable, undead, unliving blobs dotted with suction pads waiting to fasten themselves on to our lungs?

Who can think of kissing a stranger, jumping on to a bus or sending their child to school without feeling real fear? Who can think of ordinary pleasure and not assess its risk? Who among us is not a quack epidemiologist, virologist, statistician and prophet? Which scientist or doctor is not secretly praying for a miracle? Which priest is not — secretly, at least — submitting to science?

And even while the virus proliferates, who could not be thrilled by the swell of birdsong in cities, peacocks dancing at traffic crossings and the silence in the skies?

The number of cases worldwide this week crept over a million. More than 50,000 people have died already. Projections suggest that number will swell to hundreds of thousands, perhaps more. The virus has moved freely along the pathways of trade and international capital, and the terrible illness it has brought in its wake has locked humans down in their countries, their cities and their homes.

But unlike the flow of capital, this virus seeks proliferation, not profit, and has, therefore, inadvertently, to some extent, reversed the direction of the flow. It has mocked immigration controls, biometrics, digital surveillance and every other kind of data analytics, and struck hardest — thus far — in the richest, most powerful nations of the world, bringing the engine of capitalism to a juddering halt. Temporarily perhaps, but at least long enough for us to examine its parts, make an assessment and decide whether we want to help fix it, or look for a better engine.

The mandarins who are managing this pandemic are fond of speaking of war. They don’t even use war as a metaphor, they use it literally. But if it really were a war, then who would be better prepared than the US? If it were not masks and gloves that its frontline soldiers needed, but guns, smart bombs, bunker busters, submarines, fighter jets and nuclear bombs, would there be a shortage?

Night after night, from halfway across the world, some of us watch the New York governor’s press briefings with a fascination that is hard to explain. We follow the statistics, and hear the stories of overwhelmed hospitals in the US, of underpaid, overworked nurses having to make masks out of garbage bin liners and old raincoats, risking everything to bring succour to the sick. About states being forced to bid against each other for ventilators, about doctors’ dilemmas over which patient should get one and which left to die. And we think to ourselves, “My God! This is America!” 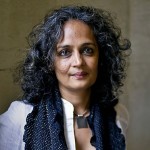 Arundhati Roy, born Nov 24 1961, is an Indian novelist and political activist. She wrote The God of Small Things, which won the 1997 Man Booker Prize for fiction, and The Ministry of Utmost Happiness. A collection of her essays from the past 20 years, My Seditious Heart, was recently published by Haymarket Books. Roy was awarded the Sydney Peace Prize in 2004 and has concentrated on penning down political issues being a critic of neo-imperialism and linked to anti-globalization movements. Roy’s subversive nature has made her accustomed to criticism. “Each time I step out, I hear the snicker-snack of knives being sharpened but that’s good. It keeps me sharp”, she said when interviewed by an Indian magazine.

On the World Football Cup and Education for a Culture of...

Kimpavitapress - June 15, 2018 0
School life can be seen as an imaginary “front-line” crossed in multiple directions by diverse types of violence actually present in almost all...

KIMPA VITA: THE MOTHER OF THE AFRICAN REVOLUTION 72 mins...