Algeria’s Cistercian monastery of Tibhirine, where seven
Trappist monks were killed during the 1990s civil war, has turned into a tourist
hotspot

TIBHIRINE, Algeria –
The abbey of Our Lady of Atlas sits on the slope of a
hill, overlooking the small village of Tibhirine and a green undulating
landscape that is dotted with shrubs and chestnut trees.

The
rambling old cloister, built with ancient stones, is bordered by high walls and
deeply rooted pine trees. This quiet and bucolic atmosphere is a major draw both
for day visitors and for people who stay overnight at the abbey’s
guesthouse.

Over
the past two years, an increasing number of visitors, mostly Muslims, has come
to the monastery, made infamous by the assassination of seven Trappist monks in
1996 during the country’s gruesome civil war that
killed some 200,000 people.

He treated my mother. Until now, Brother Luc is a
highly respected man in the region

Every
day, dozens of Algerians, as families or groups of friends, and some foreigners,
visit the abbey, whose story they more or less know. “Most of the visitors come
from Algiers, the region of Medea, and Tizi Ouzou but we have met with people
from all around Algeria,” said Brother Bruno, who serves as a
guide.

The
tour of the monastery, which was founded in 1938 in the region of Medea, a
two-hour drive from Algiers, always begins with the modestly ornate chapel.
Questions from visitors come in all forms: Is the prayer said in Latin? Are men
and women separated in the church? Do the bells still chime? Brother Bruno, a
fiftysomething French priest with salt-and-pepper hair, tries to answer in
Arabic.

Tourists,
who come to the monastery of Tibhirine, have different expectations. “Some know
a little about Christianism, but most have never set foot in a church. They are
eager to know more about our religion. Others are more interested in the history
of the abbey and the lives of the monks that were killed.

“We
have received many people who were in contact with them [when they were alive],”
Brother Bruno added. 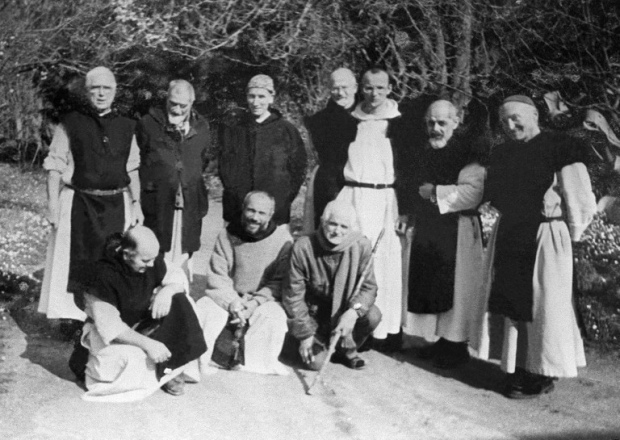 An undated file photo showing six of seven French
Trappist Monks who were kidnapped and killed on the night of 26 March 1996 from
the monastery in Tibehirine, some 100km southwest of Algiers
(AFP)

Standing
in front of seven marble stones bearing only the first names of the dead monks,
Mohammed, accompanied by his four daughters, recalled Brother Luc,
who single-handedly ran the monastery’s medical clinic, until his
murder.

“He
treated my mother. Until now, Brother Luc is a highly respected man in the
region,” said the retired teacher, who resides in Medea.

Being here makes me relive the traumatic events we
went through

In
the monastery’s cemetery, where the monks’ skulls were buried in the shade of
pine trees, Mohammed’s painful memories resurfaced. “Being here makes me relive
the traumatic events we went through. I lost many relatives and I was personally
threatened to death by Islamist terrorists,” he added.

On
8 December, in Oran, the Catholic Church
beatified seven French monks and 12 other Catholics killed
during the country’s civil war, the first ceremony of its kind in a Muslim
nation. Prior to the event, the memory of 114 imams murdered during the civil
war was honoured at Oran’s Ibn Badis Mosque in the presence of members of the
clergy and relatives of the dead monks.

The
beatification took place at the Chapel of Our Lady of Santa Cruz in front
of Catholic pilgrims and clergy, the Sufi community, and Algerian
politicians.

Recently,
the monastery has emerged as a symbol of the country’s decades-long
tragedy. 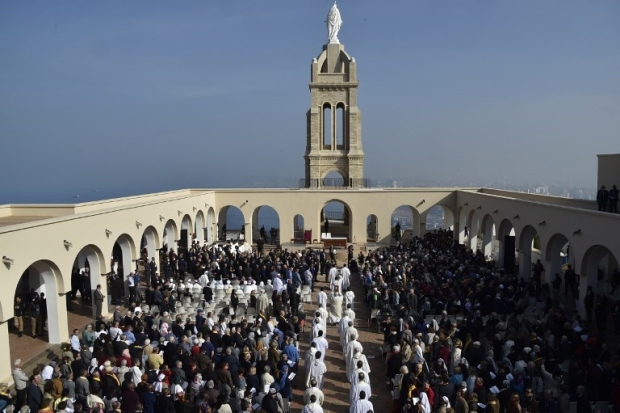 “In
Algeria, the narrative of the war of independence is hegemonic whereas the civil
war remains taboo to discuss even twenty years after it erupted. The monastery
is one of the rare places that can be used as a memorial site of the Black
Decade,” said Athmane, a French language teacher visiting from Bejaia, who is
carrying out a second visit to the abbey.

Brother
Bruno, who converted to Catholicism when he turned 30, agreed: “At the cemetery,
I often hear visitors telling their own sad stories, and praying for their
losses.”

Before
the tragic incident, the Cistercian monastery was little known. Nine French
monks were among the few Europeans who decided to stay after Algeria gained its
independence from France in 1962. Abiding by the rule of Saint Benedict, they
devoted their lives to silence, prayers and worship. 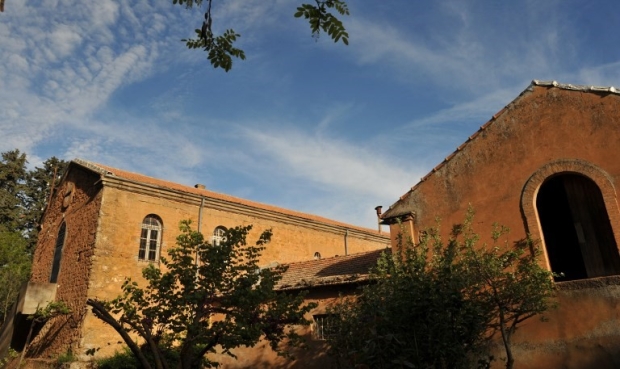 An exterior shot of the monastery at Tibhirine
(AFP)

They
bonded with their Muslim neighbours by teaching French, providing employment at
the monastery’s farm, and delivering babies. “Brother Luc had treated up to
800,000 Algerians over 50 years. Alongside [medical] prescription, he also
provided poor families with hand-me-down clothes and shoes,” said Brother
Eugene, who is in charge of the renovation of the abbey.

Feeding
the sheep, Samir, who has worked as a farmer in the monastery for the past two
decades, has a pleasant memory of that period. “Our relations were excellent. We
did not regard them as different than any inhabitant of the village,” said
Samir, who considered the abbey his “second house”.

In
the 1990s, the north African country was gripped by a protracted conflict
between the government and armed groups of Islamist militants. As the war
descended into increasing savagery, with daily beheadings, throat-slashings and
large-scale massacres, it was no longer safe for the Christian community to
reside in the remote mountain region of Medea. 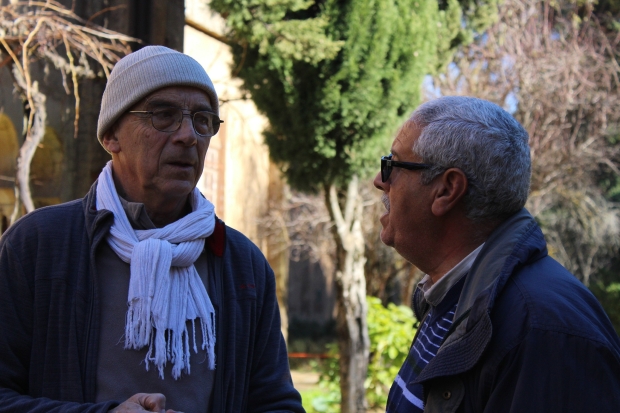 On
the night of 26 March 1996, seven Trappist monks, aged between 45 and 82, were
kidnapped from the monastery by gunmen and ultimately killed. Their heads were
found by a roadside in Medea, on 30 May 1996. But the remains of their bodies
have never been found.

“They
chose to put their lives at risk out of solidarity with the local Muslims, who
had nowhere to flee. This was an extraordinary act of love for God and the
people of Algeria,” said Ibtissem, a student of journalism, while reading the
testament of Brother Christian, pinned on a wall in the visitors’ centre. It was
written two years before the slaughter.

Nearby,
Hafid, who was leaving a message on the guestbook, was impressed by the “monks’
sacrifice” as well. “They are just like any Algerian who died during the civil
war: innocent victims,” he said. 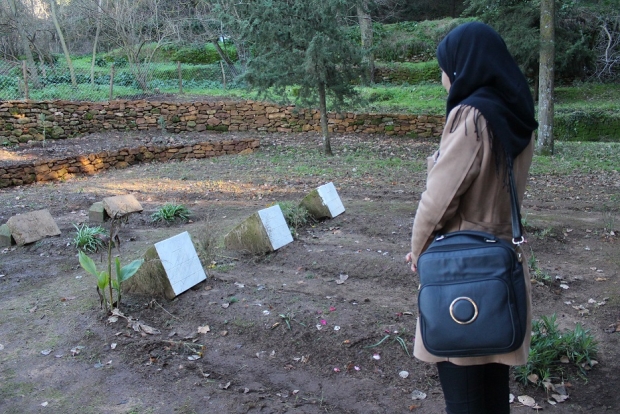 More
than 20 years after their deaths, it cannot be said for sure who was behind the
massacre even though the Armed Islamic Group (GIA), one of the most active
militant movements during the civil war, claimed responsibility for the
attack.

The
heads of the monks were exhumed in October 2014 to conduct a post-mortem
examination. The result of a French police investigation was published
last February. According to the 280-page report, the monks were beheaded after
their deaths and were killed several weeks before their heads were found in
Medea. However, the report does not say who was behind their
murder.

Algeria has still not managed to break through this
wall of silence. Maybe we will never know the truth about their deaths, like
thousands of Algerian families who have lost relatives

“Algeria
has still not managed to break through this wall of silence. Maybe we will never
know the truth about their deaths, like thousands of Algerian families who have
lost relatives,” Brother Eugene said. “Yet we wish we could discover how they
spent their last days, what their relations with their gaolers were,

In
the aftermath of the monks’ assassinations, the monastery was not abandoned. A
group of monks sought to move to the abbey in 1998, but in the war-torn country,
they were not allowed to spend nights in the cloister. After their departure in
2001, Brother Jean-Marie, a French priest, took over and kept the monastery
afloat for 15 years. 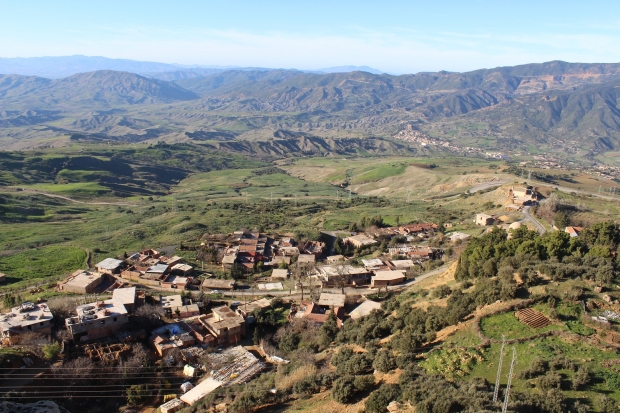 The monastery of Tibhirine was built 1,000 feet above
sea level, on the spurs of the Algerian Atlas Mountain (MEE/Djamila Ould
Khettab)

Life
really returned to the monastery when the French Chemin Neuf Community, a Roman
Catholic community originally from Lyon, France, was handed control of the site
in 2016.

Today,
a tiny group, composed of three men and one woman, takes care of the abbey
complex that includes a church, a refectory, living quarters, a sheepfold, a
henhouse, a small-scale dairy, large terraced vegetable and fruit gardens, and a
workshop where they produce organic jam and apple cider
vinegar.

Their
communal life is tightly structured according to a special rhythm of prayer,
spiritual readings, physical labour, and visits. “The monks’ motto was: ‘pray
and work’ as a means of promoting a healthy mind and body,” said Felicite, with
her rugged hands folded delicately in her lap.

Brother Christian, who spent as much time with a Bible
as with a Quran, left as his legacy a message of peace

The
agronomist’s life, likewise her fellows, has been peripatetic since she joined
the community in 1997, oscillating between France, Spain, and various African
countries. Over the past year, she has spent her days tending to bees, and
pruning and cleaning up the 1,300 trees planted in the Tibhirine monastery’s
garden.

“In
everything we do here, we try to respect the environment by reducing and reusing
waste, and growing pesticide-free fruits and vegetables,” Felicite said. “This
year, we have produced up to 9,000 jars of jam, which were sold at the
monastery’s visitor centre. Most of our vegetable crop is sold fresh in Algiers,
at a farmers’ market run by Torba, an Algerian eco-friendly association,” she
added. 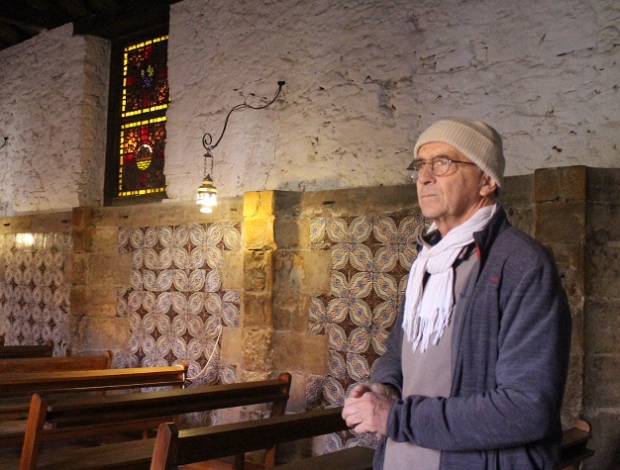 Interfaith
dialogue is another pillar of their communal life. The Chemin Neuf Community
wants to turn the monastery of Tibhirine into a model for interfaith
bridge-building in Algeria and beyond.

“Here,
Catholics are a drop in the bucket. Brother Christian, who spent as much time
with a Bible as with a Quran, left as his legacy a message of
peace. We must water the seeds bequeathed by the monks. Our duty is to
spread their message,” Brother Eugene said.

According
to the current monastery’s tenants, the recent beatification of the monks is a
positive sign for the future of interfaith relations in Algeria.

Brother Eugene is optimistic: “This celebration shows
that we can revisit Algeria’s civil war and stand against the remaining
terrorist groups, who exacerbate tensions between the religions throughout the
world.”

Kimpavitapress - September 5, 2015 0
During the summer of 2015, the international community has become increasingly concerned with the causes behind the mass exodus of...

Mali: A History of Military Bullying and Corporate Dependency

Modi’s Brutal Treatment of Kashmir Exposes His Tactics – And Their...